If you thought you know Prague in and out, prepare to be proven wrong. This metro station tucked between the Prague Castle and Straka Academy, is a well-kept secret. Only discovered because of the flood in 2002, Klarov leaves a lot of unanswered questions. Why was it built? Was it ever in use and if so, how was it connected to Prague’s metro system? We got underground and dug in the history of Prague’s secret Metro Station. 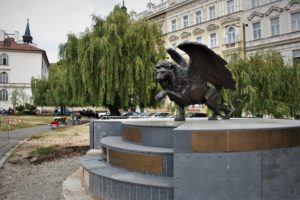 What seems like an ordinary steel gate in a back alley is in truth the sole entrance to the former vestibule of a metro station. Klarov, located on ‘U Bruských’ street, might just be the most mysterious underground station of Prague. The area below ground was built between 1952 and 1959 – when the country was under communist rule – but the station has presumably never been used before. The effective metro system we know today, was at this point a mere vision on paper (the “Metro Project Idea“) and only accepted and realized in 1965.

It was in 2002, when a devastating flood hit Prague, that the station was discovered – which at this point was buried beneath the water masses.

When the water seized, however, questions bubbled up to the surface. Up until this day, no one is able – or willing? – to answer what exactly the station in Prague 1 was built for. The built-in escalators as we know them from other metro stations in the city, leave a question mark in many experts’ faces. What seemingly is a meant to be a functional station has never been in service.

The only known thing about Klarov’s metro station leads us to the years between 1970 and 1980. During this period, the space was meant to be used for ‘civilian defense‘. 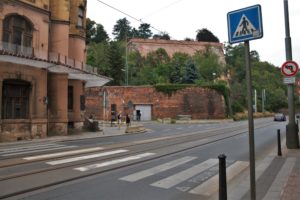 Behind the Steel Gate

The sole entrance to the abandoned metro station lies right in front of Straka Academy (Strakova Akademie). Behind the doors of steel, the escalator leads to connecting corridors from the entrance hall and the second escalator tunnel opens into a vault that looks similar to Kobylisy’s station. Because the station was built way before the underground system that we know today was constructed, it is almost impossible to say why the station has been erected and if it was ever in use.

What is even more puzzling: The sole exit of the station is not facing the busy Klárov street but a narrow alleyway of a side street. Why would anyone build a metro station away from a publicly well-known and reasonably located place? The station plans remain locked up in the archives up to this day and carry a ‘Secret’ label on them… Spooky!

Upon surrounding the big complex situated on Letensky profil, we pass by Vila Kramar and turn right into Letna park, where the identical brick walls as on U Bruských street lead visitors into the green of Prague 7. The walls are surrounded by a fence and a locked up back door catches our attention. An entrance or exit to the secret metro station? A question that will probably never be answered. 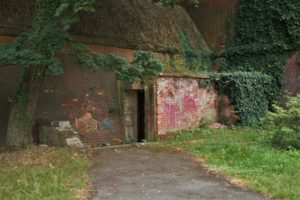 As human beings, we are keen to solve mysteries and find answers to questions. This desire makes for a perfect birthplace for legends, myths and curious thoughts. We asked around and collected a few possible – or quite impossible – scenarios* as to why the station below ground in Prague 1 was built.

A Metro Station for the Prime Minister?

When looking up the location of the secret underground station, it is impossible to unsee that the Vila Kramar is situated just a leisurely walk away from ‘Klárov’ Metro Station. Could it be that there used to be an underground walkway or elevator leading up to the mansion from the mysterious metro station? The Kramářova Vila (Kramář’s Villa) was built in 1914, by the First Prime Minister of Czechoslovakia, Karel Kramář.

Kramář lived in his – nowadays highly observed and restricted – mansion until 1938, only, though and his residency does not match the date the station was erected. 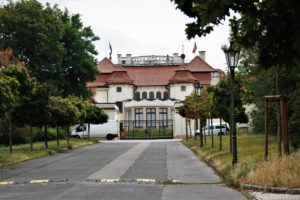 A Remainder of the Past?

What’s interesting, though; Czech Republic was under Communist Rule when the station was built. Did it serve the members of the regime to get from A to B quickly and without the public seeing them? If so, where did the station lead to?

Up until today, no other underground stations have been found that would connect with Klarov. That, however, might just be the case because the flood did not reach the stops to which the tracks of the secret metro station went to…

Hungry for more Metro Tales of Prague? Check out Louis’ article about the history of Prague’s Metro Stations.

Whether this is true or not, we might never now; but it is spooky to think that secret underground tunnels have not just existed for pedestrians but also for the massive metro wagons. 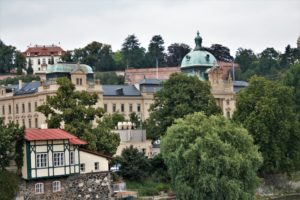 Prague knows a shock of underground stations used for storage or bunker purposes only.  The bunkers, which are part of the so-called Ochranny System Metra (Metro Protection system), were built for the safety of the public in emergencies. Was Klarov – next to secret stops between Dejvická and Želivského or Nové Butovice and Českomoravská –  just another one of them?

The bunker areas are used for housing people in times of war, against bombs, explosions, radioactivity and even supposedly have underground hospitals. Currently, the underground vaults could potentially house 300’000 people. The exact location of the drilled in spaces, however, remains unknown. But before you start noting down that Klarov might be a safe place to turn to in terrifying times, be warned, that Klarov so far only serves as a so-called ‘technology center’. 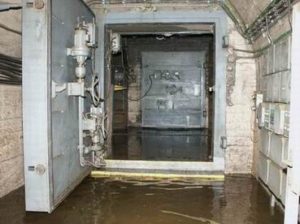 What a door in a sealed bunker could look like / Photo: Metroweb.cz

Though there seems to be documentation about the secret Metro station, officials are still hesitating to give information or even admittance to the abandoned station. What story really lingers behind the Steel Doors off Klarov street, we might just never know. It remains one of Prague’s most hidden secrets – and maybe, just maybe, that is for the best. 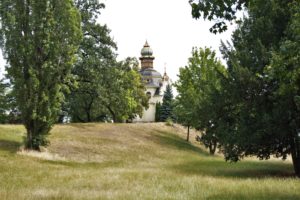 Have you been to the secret metro station yet? What urban legends and tales have you heard about its existence? Do you have a different story that might solve the riddle? We are keen to hear your thoughts in the comment section below! Happy exploring!

*These scenarios are not proven by evidence but mere assumptions of other journalists, locals and riddlers