Spring has hit town and brought some much needed sunshine and warmer temperatures with it. Perfect weather for a beer! Even though it is a massive stereotype: Czechs love their beer. And who could blame them? The many breweries around Prague and all over the country take us in their ban effortlessly, too. But with the beer comes the beer belly; and in order to stay fit for the upcoming bikini season, we combined two popular activities in one day and hiked to Hostivař’s Brewery. 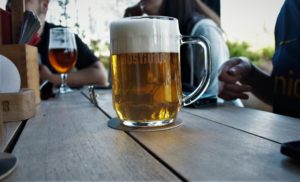 For our Beer Culture trip, we decide to meet out front the Metro Station of Háje. This is probably the closest metro stop to the entrance of Hostivař. With its 146 hectares, park Hostivař knows more than 10 entrances – and you want to find the right one so you are going to follow the right track. The many paths also allow space for sponatenous adventures, however, and you are most likely going to end up at the right place by taking different routes. Follow this map to trace back our tracks.

As for our hike, we follow the street Mirošovska, which leads from the metro station’s courtyard and rolls into Výstavní. 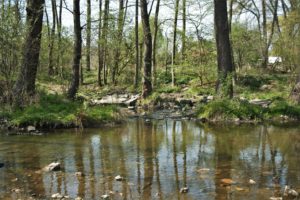 Following Výstavní, we come across one of the many entrances of Hostivař. The little stream Botič accompanies us all the way down to the water body of Hostivař. We are greeted by spring-kissed beauty, with a stream to our right hand side and blossoming cherry trees to our left.

Passing the hill leading to the bathing pier Hostivař, we turn away from the latter and follow the footpath over the bridge and get a nice view over the lake. After the bridge, we turn left and the magical wonderland surrounding the small stream begs us to take a short break and marvel at nature’s Spring beauty.

After the short break our path leads us uphill – this is the steepest it gets, by the way. We get a really nice view over the area from up here and follow the footpath leading to a resting place with benches arranged in a train-like manner. Our destination is in near sight! Following the forest path under blossoming trees and bushes, we take a last right turn and see the wooden building that inhabits the brewery. 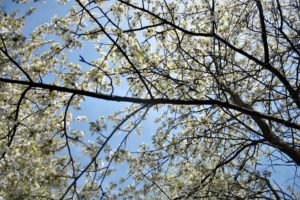 A pleasant walk through nature and about 1.5 hours later, we arrive at our destination. A modern, wooden structure is the home of perfectly brewed Prague beer. On a day like that, we definitely want to get as much sun in as possible and decide to sit on the spacious outside seating area. Now for the real deal…

Pivovar Hostivař is brewing the hoppy liquid of gods since 2013, after the idea of a brewery in Prague 15 was introduced in 2011. Time showed that the people love what they brew and so in April 2017, the team of the Brewery opened a restaurant, brewery and in-house bakery. And their flavour palette is vast. IPAs, Ales, Stouts, Wheat beer… The brewery makes a beer gourmet’s wildest dreams come true. When drinking such a perfect brew, you want to pay attention to certain notes. We call those Beer Evaluation Methods. Here’s how it works: When tasting beer, there are mainly four basic sensitory methods that are used to describe and evaluate a brew.

How does the liquid taste? Common notes are malty, grainy, sweet, hay, straw, caramel, pine, citrus notes, but the list goes on and on, as brewers get more creative.

What is the beer’s color? Does it remind you of honey, caramel, a glowing brown, amber, chestnuts, apricots, oranges, copper or deep gold? And how does its head look? Is the crown persistent, rocky, large, fluffy, dissipating, lingering, white? Is the beer color clear, dull, bright, opaque or cloudy? 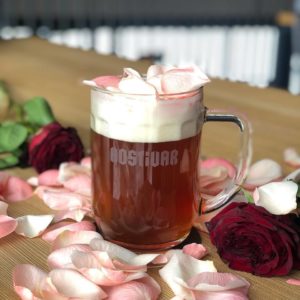 Now for the taste! Taste differences usually show in taste notes, intensity, how it evolves and the finish. Take a sip of your beer: Does it have a hint of sweetness, bitterness? Is it earthy, malty, chocolatey or does it remind you of caramel? And how does it evolve in your mouth? Are there hints of taste notes that only come through later? Does the taste dissipate or does it roll into a different taste than it had when you first took a sip? Also try to concentrate on its intensity. This one is easy to determine: It usually becomes clear rather quickly if you drink a mild or a hearty brew.

Last but not least, how does the beer feel in your mouth? Is it smooth, silky, prickly, creamy? And does it rather remind you of champagne or does it have a sharp, maybe a gassy feel to it? Does the body of the beer feel heavy, dense, light, delicate?

Now for some of Pivovar Hostivař’s brews that we really loved. For health reasons, we could not quite make it through their whole sortiment – after all, we like to drink responsibly!

Even though it is named the “cyclists beer” this is not only for active sportsmen to enjoy. This light, bottom-fermented beer is made out of two malts and hops with a little Polaris-hop added into it. It impresses with a slightly cool aroma, due to the morroccan mint that was added in the tank.

If you prefer a rather caramelly, half dark beer in your glass, you want to opt out for the 12° beer from the tap. The garnet red liquid not only mesmerizes the eye but also tastes yummy. The end of the sip is topped off with a smooth bitterness. Made from three different kinds of malt and two (Czech) hops, this is a delicious, almost dessert like beer. 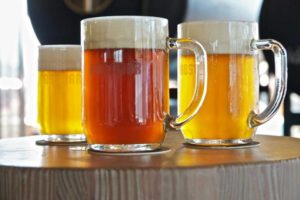 The bottom-fermented, mesmerizingly golden brew is hearty, hoppy and malty. Especially interesting is the distinctive bitterness, that makes you want to take another sip – and another. The Třináctka is a whole grain beer and was brewed out of 2 washes, fermented on 10° and aged for a minimum of 30 days.

The golden, bottom-fermented beer consists of four malts and a combination of five different hops. The beer tastes hoppy and surprises with a herbal and spicy aroma. Its body is medium-light and ends in a slight bitterness with a detectable absence of malt.

This rather thick, bottom-fermented beer has a beautiful dark golden, almost copper-like color and surprises with a citrus and flower-like smell. The full-bodied beer was malted, which leads to an intense bitterness, that only slowly fades out. The Ale is made from four different malts and four hops. Despite its heavy body, it was one of our favourites on the beer menu. 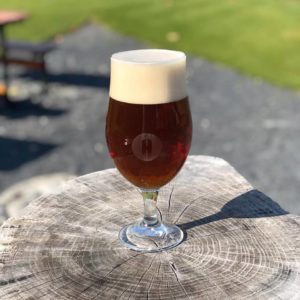 The brewery also gets creative and brews beer depending on the season. As we undertake our journey shortly before Easter, we naturally have to try some of their Special Easter beer. And it is delicious! A strong body, wrapped in flavourful, hoppy juice. The special brew goes down easily. But beware: You still have to make it back home, so leave some room for the other brews of the Brewery.

Especially cool is the take away service of beer they offer. Either bring your own growler or get a PET bottle from the brewery, choose your favourite brew and take some of your favourite home. What better souvenir from a hike is there?

Besides their own beer, Pivovar Hostivař also offers its very own bread from their in-house bakery! Either get it with one of the tasty dishes or appetizers at the brewery or get a loaf to enjoy at home.

Whether you are just staying for a beer or are sitting down for a proper meal: The atmosphere that surrounds the brewery is nothing but good vibes, relaxation and fun. The place is dog-friendly – which is probably one of the reasons why there is always a happy dog running around on the green outside seating area. 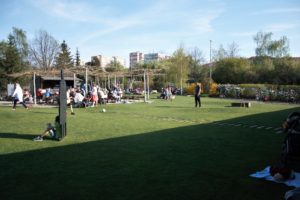 When the thirst has been clenched and the belly is satisfied, it is time to think about how we are going to get back. While some of us are still up for a hike, others feel the beer a little too much to dare and walk downhill without risking any accidents. There are, however, several ways to get back to town from where we are.

Bus back from the Brewery

The Žižkov TV tower is looming in the distance, beckoning us back to the homebase. Tired legs and full bellies beg us to take the bus back to where we came from. Luckily, the bus stop is an easy 5 minutes walk from the brewery and takes us back to the tram stop “Nádraží Hostivař” from where the choice of trams leading back to the center is vast. We get on 22, get comfortable in our seats and before we know it have reached our destination. The ride back seems quicker than the ride there – whether that is the beer in our bellies or not, we don’t know. Our trip ends in Vinohrady and because we are on a beer culture trip; why not get another hoppy drink in nearby Riegrovy? 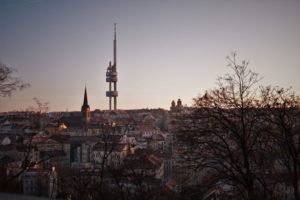 If the hike to the brewery was anything but exhausting to you and you can trust your hiking skills even after a few beers, it is definitely worth doing a loop back to Háje. To mix things up, follow the opposite trail leading away from the brewery that you’ve come from. The walk back around this side of the lake will add an extra 55 minutes to your hiking clock and give you more magnificent views of Hostivař’s forest beauty. 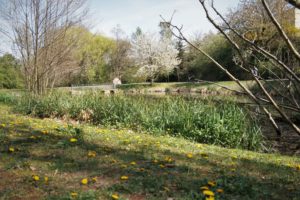 Walk to Selská & bus back – including an unexpected adventure

For all those that the 1.5 hours long hike to the brewery did not quite scratch the hiking itch, should definitely opt out to walk back to Selská and take the bus from there back to the center. On your way through the forest and along streams, you can do a little detour and pass a mini zoo called ‘Divoká zahrada’ (which is also the oldest zoo in Prague). What better way to end a day than marveling at some happy goats and fallow deer in the heart of Hostivař’s park?

From the zoo, you can either leave the lesopark and get a bus back from Ke Stáčírně or add an extra 20-30 minutes to the hike and loop back through the forest to Selská. The bus number 177 passing by Selská, will bring you back to Spojovaci, from where you can reach trams 1,9 and 11.

Have you been to Pivovar Hostivař yet? How did you like their beer, ambiance and overall location? We want to hear all about it in the comments! Happy Beer Tasting and: Drink responsibly!