Prague – a vibrant city with art around every corner. The National Art Gallery, The DOX and more let us have a glimpse into an artist’s work and marvel at one’s creativity. But what if we told you, there is more than just the big, well known galleries? What if we told you, there are so many more places where you can find art in this wonderful city? What if you could marvel at local artists’ work?

If you are looking for some hidden talent, want to know what the locals produce or are one of them and looking for a platform, follow our new series ‘ARTSPOTTING’ and get to know the must visit galleries and experiences!

This week on Artspotting, we met up with the artist behind the newly emerged art space ‘Art Together’ and got an exclusive interview with her. Let’s see what art we could do together!

Silvia Vezzuto has been an artist in Prague for over twenty years now. Besides wonderful frescoes – a very demanding kind of art since the paint dries quick and no mistakes are fixable – Silvia does oil paintings, decorative art using minerals and Computer Art.

How it all began

Born and raised in Brescia – a pictorial village in Northern Italy – Silvia was a lively kid. “The only way my parents got me to stop talking for a while was to give me a paper and some crayons”, the bubbly lady tells us smilingly. Out of a silencing activity soon grew a serious interest. An interest that would grow so strong that she would change her way of living in the years to come.

As Silvia grew up to be a young adult, the choice between universities came along. “My parents would have liked to see me pursue a more ‘usual’ course”, Silvia remembers with a bold grin. Even though Silvia had her heart set on making art, she found a compromise with her parents, which was a fashion design course that she then pursued. The young artist said goodbye to the idyllic life on Lombardian town to – at first – study fashion design and later on art in Bologna. 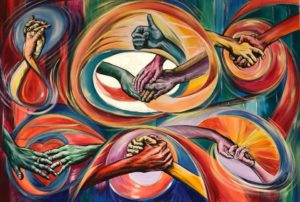 The 1980’s where the years of Italy’s emerging fashion boom and while she learned a lot of useful art related things – such as working with shapes and getting the hang of realistic drawing – Silvia had to admit that she was not going to be a fashion designer at any point in her life. “I was just not able to comprehend how people could sit over a draft of a skirt which in another 6 months would be considered ‘out’ or duplicated and sold off in outlets all too soon”, she tells us. And so her path lead down the illustrations and graphic design studies aisle, which suited her way better. The studies Silvia now pursued combined art with other useful subjects such as psychology and philosophy – Umberto Eco being one of her lecturers at the time.

During her studies, the urge to travel did not leave her alone and so she set out for a journey that would change her life forever: With a group of friends studying cinematography and philosophy at her side and the quenchless desire to see more of the world and get to know different cultures, she took off towards the Balkans – especially Estonia, which had just opened its borders in 1993.

23-year-old Silvia eventually found her way to Prague. The capital of Czech Republic did what it does best: It put Silvia under its spell. Its architecture, its culture and its art made Silvia comprehend that she needed to change her location in order to learn more that would enrich her craft. Silvia describes Prague back then as a ‘white canvas’: “There was nothing. Except a lot of people.” The young artist lost her heart to the European country and when she did so, the time for Silvia to return her studies in Bologna had come – and yet Prague did not let her go.

With a dream in her heart and determination in her soul, she kept on studying in Italy and spent her holidays painting and exploring Prague. The end of her studies eventually came around and as soon as she had her diploma in her hand, she knew where she would go. “It was incredibly hard to get papers that allowed one to stay in Czech Republic”, she remembers demure. Besides the usual paperwork, medical health checks and contracts that would grant her an income were needed. The list seemed endless. But in an ordeal of collecting documents for 6 months straight, Silvia managed to get everything together in order to pursue her dream. A dream which to many people seemed odd. “Friends and family members came up to me and asked me why I would move to Prague when everybody else was trying to move to Italy from Czech Republic and its neighboring states.” But Silvia had made her decision and was determined to leave her home state. The invisible yet deep bond she had with the capital of Czech Republic was too strong to ignore. Silvia’s efforts and persistence eventually paid off and she got her paperwork that allowed her to stay in the city she had discovered to be her second home. 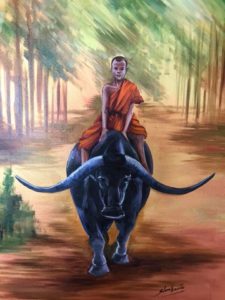 In the beginnings of her stay, she would continue to paint a lot of frescoes for well-remunerated companies and institutions abroad – but a little time down the road she knew that she was ready to dive into the art scene of Prague and make a living out of it. “I was very lucky, I have do admit”, she tells us. It was a mere coincidence that Silvia had a friend who waited a lady at a restaurant. A lady who turned out to be the owner of one of the first art spaces in Prague. The art space concentrated on wall paintings – or frescoes – which were Silvia’s specialty. The bubbly lady started working for the Russian curator. “And that was when a crazy and exciting time in my life started”, she says with a grin on her face.

Painting frescoes for respectively in important buildings such as the castle Jemniště in Benešov, painting portraits of the Sternbergov family, followed by requests of ambassadors to take their portraits… Silvia had not only arrived in Prague’s art scene but was able to make a name for herself! 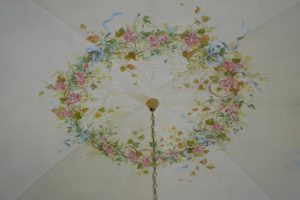 In the years to follow Silvia was invited to New York and even Tel Aviv to exhibit her works. And while she enjoyed every minute of painting and making art, the lovely lady from Brescia suddenly saw herself confronted with the hardest decision of her life: Next to making and bleeding art, she always had a wish to have a family on her own. But with the stress and the nonstop moving around the world, she knew that would not be the environment she wanted for her kids. “I always had the motto that if I do something, I do right”, Silvia continues. And so she decided for a family – but did never put away the paintbrush for long. Today Silvia is the mother of three wonderful kids – and yet she has both feet firmly on the ground of the studio in her house.

Back to the canvas – and more

As fulfilling as motherhood was, Silvia could not just forget about her passion – or even more so her calling – and so in the times between changing diapers, singing lullabies and preparing the kids for the challenges they would face out there, she started to work for the big cosmetic company ‘Dermacol’. Besides a lot of decorative works, she also came up with a design for a specially launched Christmas soap. 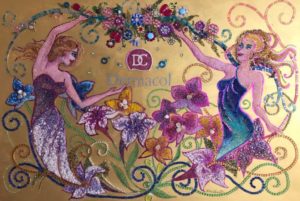 Silvia’s work for Dermacol, made with small minerals and decorations of all sorts / Image & Painting by Silvia Vezzuto

In between all of that, Silvia continued to paint her own paintings and sold them. Her work was so good that galleries asked her to exhibit and thus she could get around a hurdle many artists face nowadays: Finding a platform to advertise themselves and their works. Soon after that she started teaching workshops all around Prague and gave people the chance to paint and create art themselves.

“In the twenty years I have lived here, I have never been bored”, Silvia states. And today she is part of the reason as to why Prague never seizes to fascinate and entertain.

Art Together: An art space emerges

In 2018, Silvia founded ‘Art Together’. Her art gallery focuses not only on exhibiting wonderful frescoes, scenes straight out of a fairy tale but also a new trend that is coming up and embraces the power of technological progress: Computer Art. 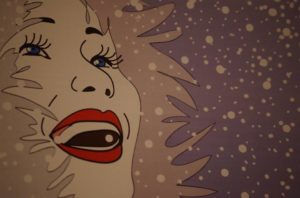 “I know that some people might not consider the graphically designed pictures as art because it was not made on a canvas using a brush. However, art comes in different shapes and forms – and in 2018 also in different formats!” With an incredible and natural lightness, Silvia encourages people to try different approaches towards art.

When asked why she felt like opening a gallery was the logical next step she answers: “Everybody just goes to the big galleries and the exhibitions of big names, ignoring local and young artists. It was time for a change”, Silvia states. 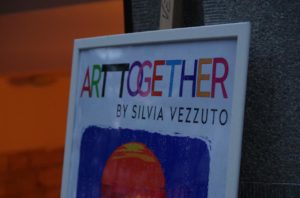 The art space with heart: Art Together / Image by Silvia Vezzuto

Furthermore, with Art Together, the lovely and bubbly Silvia wanted to bring people together and let them experience art, make it themselves and learn what beautiful things one can produce with the right attitude – and the right swing – towards it.

But Silvia did not stop there: As the gallery is located just off Jiřího z Poděbrad, it also is part of many festivals with workshops, fun activities and more! Check out where you can find Silvia, her wonderful art and workshops, right here! 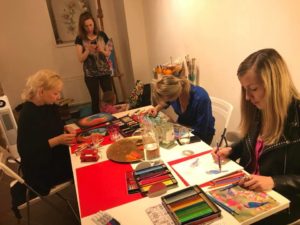 Learning, crafting and having fun – all that and more is a workshop at Art Together / Image by Silvia Vezzuto 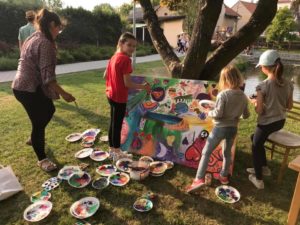 Or meet Silvia and her crew outdoors and make art at one of the many festivals they are part of! / Image by Silvia Vezzuto

Did we make you hungry to find out more? Would you like to meet the lovely and bubbly Silvia in person? Have no fear, we have all the information you need to marvel at Silvia’s art and the wonderful person behind it!