This year, all Bohemians celebrate a very important anniversary. On the 12th of May, it will be 700 years since the birth of the celebrated King of Bohemia and Holy Roman Emperor Charles IV. There will of course be many special events taking place to celebrate Charles IV’s “700th Birthday” – one of these being a brand new exhibition “The Father of the country cipher”. 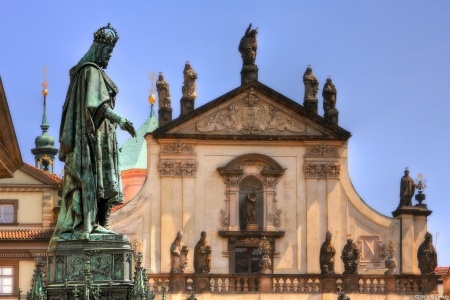 The project of this new exhibition introduces Charles IV as a builder, developer, and visionary and it tells the fascinating story of the New Town of Prague. The outdoor part of the exhibition will take place on Wenceslas Square from the 3rd of May till the 1st of June 2016. At Vyšehrad, it will be available from the 23rd of June till the end of January. And there will be – among other things – special tours and lectures taking place within the project.

“All the churches and monasteries, that Charles IV had built, refer to significant centres of Christianity or the Premyslid Dynasty and the location of the churches on map is reminiscent of a cipher,” the organizers of the exhibition project said, to explain its name. And they also describe the aim of it: “We will open a window to the past, to show, how the New Town looked like in the era of Charles IV.” They also promise to make more detailed info on the interesting and original project public soon.

You can find more details on the official site – Charles IV and Prague – 700 years.