The Slav Epic (“Slovanská epopej” in Czech), a very famous cycle of paintings by the equally renowned Czech Art Nouveau painter Alfons Mucha, might finally have appropriate premises in which to be displayed. Prague 1 representatives have offered a lucrative site in the centre on which to build a pavilion.

Alfons Mucha painted his cycle of 20 large canvases depicting the mythology and history of the Czechs and other Slavic peoples between 1910 and 1928. When finished, Mucha donated his work of art to the city of Prague, on one condition: he wished that the Slav Epic would have a special pavilion built for it. Unfortunately, his requirement has not yet been met. 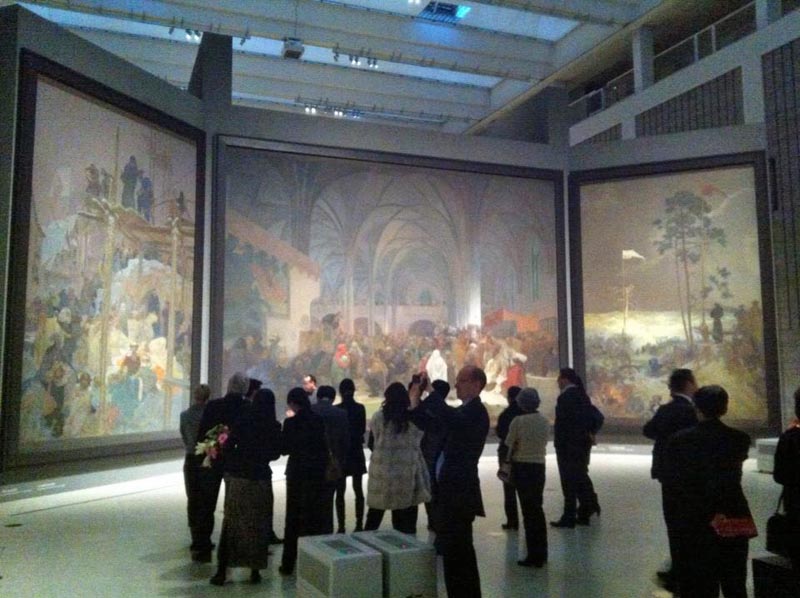 The Slav Epic, Mucha’s masterpiece, spent many years at a chateau in Moravský Krumlov, a town in the South Moravian Region of the Czech Republic. There were many attempts to move it to Prague in the past, but the Mucha Foundation, run by John Mucha (grandson) – at that time together with the now deceased Mucha’s daughter-in-law Geraldine – disagreed with any merely provisional measures.

Now, Prague 1 have suggested that the long-expected pavilion should be built in a park at the end of “Revoluční” street, near “Štefánikův most” (bridge) over the Vltava river. The city of Prague, the owner of the Epic, should be the investor. Originally, there was a building called “Eliščiny lázně” (Alice baths), which was demolished in the 40s, and the site has been vacant ever since.

Prague representatives want to decide where the Slav Epic should be permanently placed, until the end of 2017.

Currently the Slav Epic is open to the public at the National Gallery in Prague, but the exhibition will be closed by end of 2016. The admission fee is only 180 CZK ($7.50), and we highly recommend seeing it.