After a long and hot summer, fall has made its way to Prague and coats the capital of Czech Republic with colors and a refreshing breeze. What better thing is there to do than get outside, get the clear air in your lungs and move your body in one of Czech Republic’s many forests (some of them introduced in our article “Gorgeous Hiking Trails to check out”?

For all those of you that can not invest a whole day for hiking and yet want to surround themselves with some gorgeous nature, we got some good news. The paradise of Košíře-Motol, a nature Park located in Prague 5, is only a tram ride away! With a stunning area of 354 hectares, this nature park in the middle of the city is bound to take your breath away and provide you with the magical forest adventure everyone is looking for this autumn.

Košíře is full of squirrels, birds and other furry companions

Back to the roots

Once in the hands of Charles IV’s scribe of the court kitchen – Henry – in the 16th century, Cibulka fell victim to both the Thirty years war and the War of Austrian Succession. Many parts of this nowadays beautiful green area were destroyed and rebuilt through the Prince of Passau – Leopold Leonhard Thun – in 1817. Leopold expanded the preexisting mansion, added several stables and farm buildings and private gardens. Besides a fountain with interesting dove-dogs figures, he also cultivated a proper English garden as well as the forest park we now know as Košíře-Motol. The park is considered to be one of the few surviving examples of Prague’s late Baroque epoch.

In 1922, the last private owner of Košíře sold his ground to the municipality and the park was then declared ‘an area of tranquility’ in 1991. Only one year later, 1992, it became part of Czech Republic’s long list of Natural Parks. 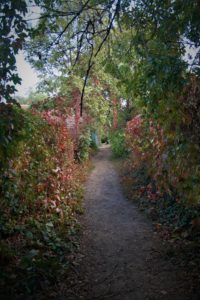 This magical and widespread park truly is a maze of never ending paths straight out of ‘Alice in Wonderland’. That said, you are not short on animal followers in this part of town either. Especially birdwatchers will enjoy their visit to Košíře. Spotted Woodpeckers, Blue Tits and less feathery creatures such as black squirrels scrimmage around the foresty grounds and delight walkers, bikers and promenaders likewise.

Upon entering the park from Poštovna tram stop, Svaty Jan Nepomucký – the saint of Bohemia – welcomes you on your path to nature. The sculpture, made through the hands of Josef Malinsky, was installed in 1822 and is the only piece of the area that seems to have been inspired by the Church. Of course, the statue wears the coat of arms of Leopold Leonhard Thun and tells the tale of the drowning of St. John of Nepomuk in the Vltava river. 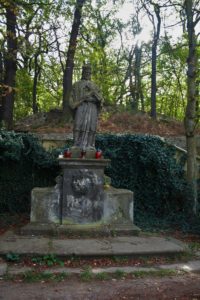 Svatý Jan Nepomucký watches over you during your visit

The statue is part of winding stone stairs – overgrown by moss and ivy – which lead up a small hill and directly to the next attraction:

This octagonal building that reminds one of a pagoda is one of totaling two lookout towers in the park. Built in 1822, the pavilion – or because of its appearance sometimes also called the Chinese Mill –  has suffered within the past few years. Where once a copper man stood on the roof, holding a sunshade and accompanied by bells that rang when the wind blew threw them as well as a Aeol’s harp which hung in a nearby tree and made fine sounds is now nothing alike. Even the two sandstone figures of a man and a woman on the first floor of the building have vanished. 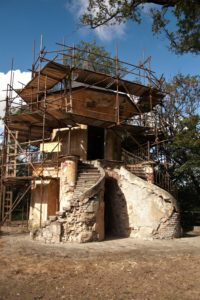 Beautiful to look at even though it is currently being reconstructed: Chinese Pavilion

Even though the Chinese Mill does not shine as it did in its bloom, the pavilion is due to its architecture a gem in itself. And to make the monument shine again in the future, Prague 5 is currently renovating it!

Did you ever dream of being a fellow damsel or lord of a fortress in the woods? Then 13 meters tall Cibulka Tower was made for you. Not only is it located in the middle of nowhere, so enemies won’t have a chance to attack you, it also offers a view – and what a view! From the top of the easy to climb Cibulka Tower you can overlook the area of Košíře and get an idea of just how big this park is. Makes one almost wonder, how the park is not overrun. 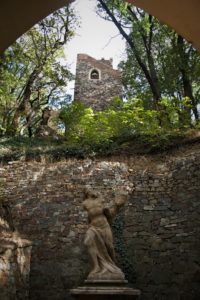 Feel like a damsel or burgher: Watch Tower in Košíře

76 steps down, one can spot the ruins that locals call Dante’s Hell. Upon entering the ruin, the statue of the ‘throttle’ will welcome you in his humble, ivy-filled home. 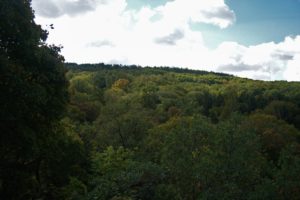 Your treat for climbing the 76 steps of the watch tower: A beautiful view

Here comes another romantic element of Košíře’s park: The Hermitage. Tucked away on the other side of the forest, this stone building inhabits two wooden figures. They used to be moving in order to entertain – or spook? – visitors. What story they tell we shall never know for sure. Rumor hast it that the two puppets are knights in battle, one of them knocking the other out and the loser falling onto a bed of straw. 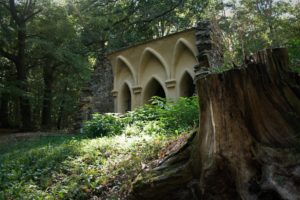 How to get there

To get to this wonderland right in front of your doorstep, simply hop on tram 9 or 10 from ‘Anděl’ and get off at either “Poštovna” – if you would like to pass by the pond and the Chinese Pavillon – or “Hotel Golf” if you want to get started with the view – please notice that both of the stops are request stops, so do not forget to push the button!

Got your hiking boots on already? This labyrinth of leafy paths and hidden gems is waiting to be explored! Pack yourself a lunch, layer up and off you go!