Magnificent cherry trees, a view of the TV tower in the distance & an interesting, educational trail: Suchdol Valley is the perfect hike in the city, if need a break from the hustle and bustle. We checked out the educational trail passing through fields, forests and gushing rivers. 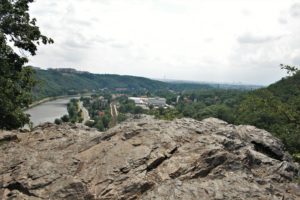 It’s one of the lesser hot days in the city that beg for a hike. Not wanting to sit on a train for several hours, we scouted for lesser known hikes in the city of a hundred spires and stumbled upon the magnificent Suchdol valley. A quick ride on the metro and a local bus bring us to the place where city and nature borders. Here is why you should set out for a city hike in Suchdol, too. 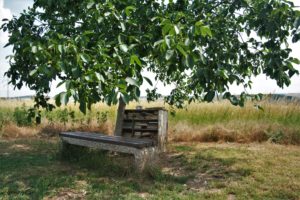 What to See in Suchdol

Rarely does a hike start with the picturesque view. This one however, is different. Looking over the valley of Suchdol and spying the TV Tower in the distance, we get to rest our bones on the incredible stone formation of Suchdol. The view from up here is just breathtakingly beautiful and the green terraces of the Vltava valley just suck you in.

The incredible stone formations near the city are home to many rare beetle such as the blue and golden ground beetle. This is the optimal place for a picnic, if you – as we did – start your hike around lunchtime.

To get back to the path, go up the short street you came from, surpassing a family home with a big garden. Turn to the right and follow the street into the forest. 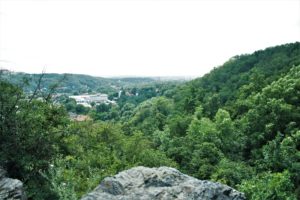 Following a huge field and tons of cherry trees with tasty looking red fruit hanging from them, we make our way downhill and spy a castle-like tower in the distance.  It is Libensky Vodarna, which was built in 1904. Its beauty looms on the other side of the river, the trail leading us into the green forest. Even though it is tempting to eat the berries and plants crossing our paths, we keep our hands off, as the fruit trees belong to private owners. 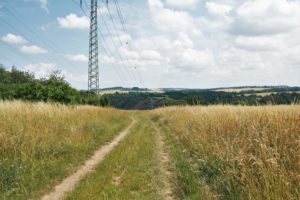 We pass by a couple of chickens puckering around. What follows is a green wonderland stretching over roughly 1.5 kilometers over a bridge, through Roztocky Haj, which inhabits a burial place made from stone, dating back to the early to middle bronze age. It is also the geological base of Roztocky’s grove and the forest has built around it over the years .

Rotocky Haj is a Nature Reserve which is home to many rare flora and fauna. And so, throughout your journey – and if you listen closely – you will be accompanied by chirps and melodies from wrens, nightingales and cuckoos. 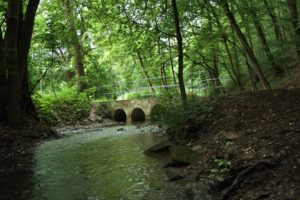 Surpassing an ivy-covered area by the stream, we make our way to the district of Roztoky.

The village’s most popular sight is Roztocky Zamek, a Renaissance castle built at the end of the 13th century. In the 17th century, the Knights of Boryňová of Lhota made their way to Roztocky and rebuilt the fortification into today’s Renaissance castle with stables and malthouses up to this day.

In the 19th century, an English garden with exotic plants was added to the complex and the building holds interesting works of the sculptor Hedvika Zaorálková. If you are keen on visiting the castle, you can drop out of the hiking path and follow the main street to the Zamek. 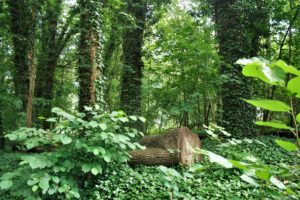 Whether you are directly continuing your hike or join the path after your castle visit, you will come across Maximiliánka. The former restaurant marks the beginning of the Unetice valley and was erected next to the stream ‘Únětice’, where rainbow trout swim and feast. This is an optimal place to have a tiny break, listen to the forest and valley sounds as you rest our legs. 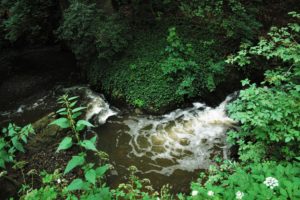 As we continue our path through the thick forest, a building crosses our path. It is Spálený mlýn . The Water Mill, built in 1786, was only used for its original purpose for a very brief time. It burned down under mysterious circumstances and only then became famous, under the less charming name ‘The Burnt Mill’. Though it was restored, no one seemed to be able or willing to keep the mill for a longer amount of time…

…Until the year 1849 rolled around and the purpose of the mill was reinvented. The burnt mill became a soap and candle factory next to the forest. But the new found luck didn’t last long: In the year of 1880, the building – again under mysterious circumstances – was lit and burned down.

People were not willing to give the building up, though and remodeled the by now former mill and factory into a bakery. A beautiful thought, having a bakery by next to a forest, getting your fresh bread on your Sunday afternoon walk. The wonderful thought became reality – until lightning struck the building, causing it to burn down again.

Spooky! Maybe, keep your distance when walking by, just to be safe.

As we continue down the field path, we encounter another mill. This one, however, seems to have had a luckier past than Spaleny. The building is actually internationally known and has made appearances in movies and series. Don’t believe us?

Trojanův mlýn is a huge complex, with 2 houses, stables, gardens, fields and even a part of the forest. Used because of its location and because the complex was so comprehensive, the house and its surrounding is popular with american filmmakers. If you’ve watched the Thriller ‘Agent’, you might recognize the white building with its orange bricks on your hike. 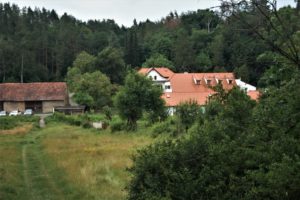 The second last stop of our hike is a quiet place on earth. The only company we have is a few ducks that swim on the pond – which makes for a picturesque panorama when climbing up to the view point ‘Alšova’. In order to do so, you will have to leave the hiking path and head uphill from where you are standing right now: The gorge underneath the holy hill (Soutěska pod Holým vrchem).

The place seems quiet but is home to many species of flora and fauna, such as a vast variety of butterflies and woodpeckers, reeds (which are endangered) and willows.

It is also the site where archaeological finds have appeared, which leads to the assumption that the place had been inhabited already in the early Bronze Age! 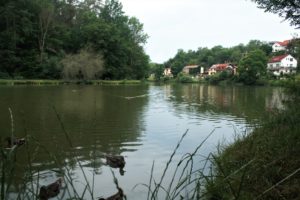 Keen for more hikes? Make sure you check out these magnificent trails in the Republic, too! 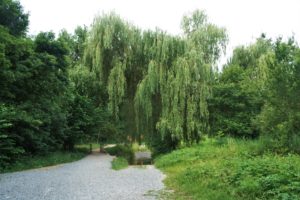 A 30 minutes walk through the forest later, we turn into a living quarter, we spot the orange and white building on our right hand side. It’s the Chapel of Saint Vaclav. Unfortunately, it remains closed to the public and we don’t to glimpse inside of it. 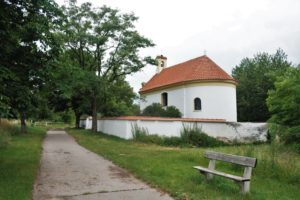 As we pass by a turquoise building, we can’t help but find that we well deserved a pint of freshly draft beer and decide to lounge on the sun deck of Starosuchdolska Restauraca. Na zdravi!

A pint later and fully charged, we set out for our last stop: Stary Suchdol. The small village was the place Mikoláš Aleš v Suchdole, a famous Czech poet, called home between 1877 and 1879.  During his stay, the archeologist Čeněk Rýzner made groundbreaking discoveries about the culture of Únětice. 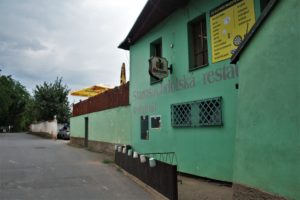 All that’s left now is walking down and up the hill, following Na Rybarske, marveling at the gardens and cute houses of the area, up to the final stop of the bus line 107, where we catch a bus back to Dejvicka.

How to Get to Suchdol

To reach this green paradise, simply hop on the metro, get off at Dejvicka and catch bus number 147 or 107. A short 10 minutes bus ride will let you off at Kamýcká. From here, follow Suchdolska street from about 200 meters and keep to the street to the right (Na rybářcé), you will automatically land on the educational trail, which is marked with yellow way signs. The 7.5 kilometers long trail will keep you entertained for about 3 hours. 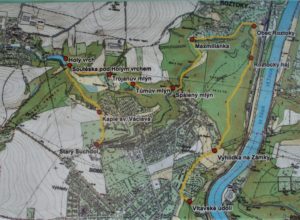 The Hike of Roztocký háj – Tiché údolí at a Glance

Find the map for your hike here.

Have you checked out Suchdol yet? Do you have further stops in the valley that we’ve missed? Tell us all about it in the comments! Happy exploring! 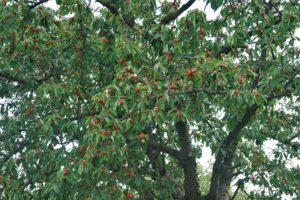