The autumn breeze whistles through the narrow alleyways of the city of a hundred spires. September creates a melange of auburn, golden and red leaves, building a little carpet on the streets of Prague. With the cold temperatures ahead, hearty and comforting dishes come in fashion again; a discipline, in which the Czech Republic shines in.

The Central European country is masterfully skilled in creating comforting meals for the cold autumn and winter days. Here’s what to not miss out on this autumn in Prague and which dishes aren’t all that traditionally Czech as they seem. 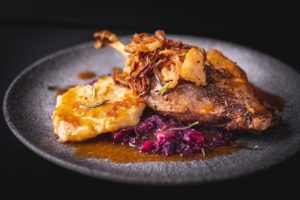 Czech Comfort Food to Warm you Up

A tender piece of marinated beef sirloin in an embrace of cream and topped with a cranberry sauce, nestling next to a homemade knedlik (bread dumpling) as well as a bed of red cabbage: Svíčková is not only one of the best-known dishes of the Czech Republic, but a real comforter for cold days, too.

Svíčková was even brought to the United States after the First World War and a slight varied recipe shared with generations to come. That is why this Czech dish has made it all the way to Chicago, though it is rarely served with vegetables on the side there.

The original Svíčková is served all over the capital city and beyond. You can either make your own at home or sit down at a cozy place and dig into your plate.

Where to Eat Svíčková:

The tradition behind eating Roast Goose on Svatomartinské goes back all the way to the 18th century. On St. Martin’s Day (November 11th) every proud owner of a vineyard would venture out to their winemakers, sample the new wine and determine whether the winemakers would be taking care of the owner’s precious grapes for another year.

St. Martin’s Day finds its origins in a legend. It is said that Martin was a Roman soldier, who accepted the Christian faith only later in his life. When hiding in a goose pen in order to not be ordained bishop, legend has it that a couple of geese gave his hiding spot away – and thus deserved to be thrown into a pan. The holiday is celebrated in many parts of Europe.

Whether or not the animals deserved the punishment, roasted goose is nowadays found on many menus around St. Martin’s Day and is often accompanied with red cabbage and bread dumplings as well as a good drop of young wine. A true autumn dish that will warm you up and make your belly happy.

Where to Eat Roast Goose: 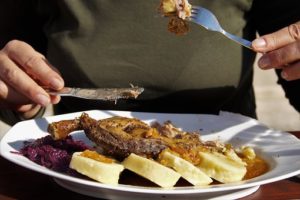 Pork in all shapes and forms – and the Tradition behind it

At the beginning of every new year, a long practiced tradition is happening: Zabijačka. Though less specifically Czech but practiced in lots of Slavic countries,  every January, a Czech family will traditionally slaughter a pig and use all of its parts to sustain themselves with throughout the year.

The tradition is a non-public event and the animal slaughtered in a humane way. No part of the pig is wasted, as to cherish what the animal has given the family. Besides pork shoulders, belly and butt meat, lard and blood sausage are made from the pig, to only name a few products. Commonly, we get to enjoy the ‘nice’ cuts of a pig – and maybe a dash of the lard – when eating in a restaurant.

Pork is widely used in the Czech cuisine. Be it the pork knee or shoulder served with cabbage and bread dumplings, over to pork sausages and lard pastries. A real classic is the Schnitzel with Potato Salad.

Where to Eat Pork Dishes: 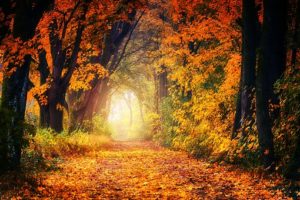 The classic! Garlic Soup will not only warm you up, it’ll also send your taste buds on an interesting journey. Hailed all around the world for its health benefits, Garlic Soup is a beloved weeknight dinner that will warm you up and keep viruses at arm’s length. Garlic Soup is a traditional starter dish in many restaurants around town all year round. We love our garlic soup homemade and topped with some toasted breadcrumbs.

Czech Republic is well-known for soups in general. As soon as the winter winds whip around the streets, soups of all kind are being cooked up; potato soup, mushroom soup, garlic soup… The nation loves the comforting dish that comes in many variations.

Every Czech frolics when September arrives. It’s the peak of mushroom hunting season, bringing many delicious dishes with it. Czech families often set out to collect the wild pearls in the Czech forests in and beyond Prague to create finger-licking good dishes like a Bramboračka (potato soup with mushrooms) or dry and store them for the winter months to come.

Looking to go mushroom foraging? Check out our Guide to Mushroom Hunting!

When visiting Prague in autumn, you should definitely try one or two mushroom inspired dishes in the city! Because the good is widely available, many restaurants around the city offer mushroom risotto, Kulajda soup and all kinds of mushroom-induced dishes.

Where to eat Mushrooms this Autumn: 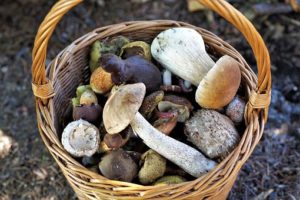 First developed in medieval Hungary, the stew made from beef, potatoes, paprika and stock found its way to to Czech Republic presumably not long after the Hungarian shepherds in the 9th century had started to eat it on their watch.

In Czechia, however, the stew is often served with bread dumplings on the side. Of course, a locally brewed, freshly draft beer goes well with the soup – which on Czech grounds is sometimes even made with beer, too.

Where to Eat Great Goulash: 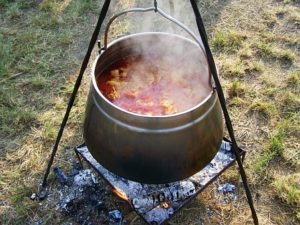 Ah, a good old bowl of steaming hot Borscht makes the heart sing after a day out in the forest. Thank you, Ukraine, for bringing this wonderful dish to Czech Republic! Made from beets, garlic and potatoes, this warming soup will lift your spirits with every spoonful. Easily made at home, you can also get it at several places as the ‘daily soup’.

In its first adaption, Borscht war originally made from common hogweed. The Slavs collected hogweed in spring und used the roots of the vegetable for dishes like Borscht. Stems, leaves and umbels were chopped und left to ferment, eventually ending in what you could consider Sauerkraut back then. This is also what became the main, sour ingredient we know now in Borscht.

Where to Eat kick-ass Borscht: 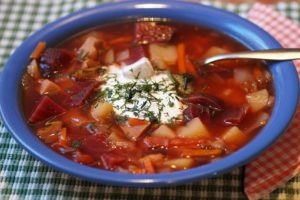 Obviously, the Czechs won’t let you go home without a scrumptious dessert. Strudl is a traditional puff pastry that envelopes apple pieces cooked with cinnamon, sugar and lemon juice. Strudl translates into ‘whirlpool’ in German and it was named so because the rolled dough looks like the inside of one.

The crispy shell with a soft filling is a bestseller – especially in autumn, when the urge for a warm dessert rises. Apple Strudl goes all the way back to the Austro-Hungarian Empire and got more popular in the 18th century through the Habsburgs.

Adapted by the Czechs in the years to come, they are undoubtedly the nation that has mastered the production of the perfect Strudl. But what inspired the Austrians to even start a ‘whirlpool’ pastry? It was the Baklava pastry from Turkey – which was brought to Austria in 1453 – that gave pastry chefs in Austria the idea to fill it and serve it.

The oldest recipe for a Strudl dates back to 1696. It’s handwritten directions to produce a milk-cream strudel. Today, we know many variations and adaptions for Strudl fillings; the most used ones in Czech Republic being poppy seeds, apples or quark. Strudl is so popular, it even made it all the way to Texas and became the official state pastry there!

You can either make your own with a few ingredients or pay a visit to Strudlarna in Zizkov, to indulge in the – hands down – best Strudl in the city. Strudls are not only solemnly filled with apples. So, if you’d prefer an alternative to the fruity piece, try one with Tvaroh or poppy seeds.

Where to eat finger-licking good Strudl: 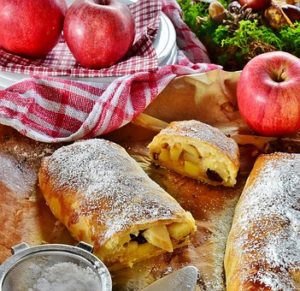 Many visitors feel the need to try what is hailed as the ultimate Czech pastry: Trdelnik. The roll, however, is not all that Czech-invented, as it claims to be. In fact, the first idea to fry a sweet dough on a roll and then putting it in cinnamon and sugar, goes all the way back to neolithic times.

Because there was no other way to cook dough before ovens or stoves were invented, the only way to get dough baked was by twisting it around a stick and rotating it – as we often do on school trips when we are young.

Because it was easy-to-use, baking dough wrapped around a wooden stick was a popular way of getting your food cooked – from Sweden down south to Italy, and this ever since ancient Greece! What makes the Czech Trdelnik special, is that it is an ancient word for the use of a wooden stick, mallet or spindle for twisting yarn. Czech Republic was also very good at marketing the simple idea, which might be the reason why it is considered a ‘must try’ when in Prague.

The smell of the roll is just heavenly, though it does – in our opinion – not trump the taste of an Apple Strudl or a Buchta. The cinnamon and sugar rolls are widely available in the city center, though less common in the districts surrounding it. 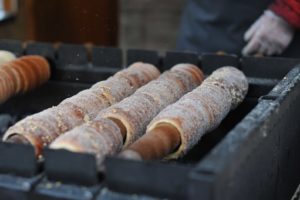 Goulash, mushrooms, a good old Schnitzel and a Strudl for good measure will bring you through the cold season with a smile on your face and a content gurgle from your tummy. Traditionally Czech or not: You should definitely check out some of these comforting dishes that make great menus in autumn and winter time.

Have you tried any of these delicious dishes? Do you know more Czech comfort food that you want to share with others? We are keen to hear about it in the comments! Happy Munching!