Have you ever wondered what lies behind the walls of Tyršův dům? Do you want to see Nádraží Praha-Bubny from a different angle? Are you up for an adventure in the middle of the city you thought you knew? Then Prague Open House festival is for you!

In 2014, a handful of cultural enthusiasts decided to set up something Prague had not seen before. Their goal was to open the doors to houses to interested people, who otherwise would never get to have a glance into the hidden cultural sights of Prague. Struck by the phenomenal idea to make a festival out of it so the public could get their slice of architecture, culture and history, they started Open House Praha.

For the fourth time now, on 19th and 20th May 2018, more than 60 of Prague’s historical and architectural significant sights that you probably have never even heard of are open to the public – for free!

This weekend, an adventure awaits you. Are you ready to unlock some doors? Find out right here which spots you should not miss!

This gem in Neo-Renaissance style is so beautiful that it served as a filming location for several foreign film productions. Besides its luxurious interior and its magnificent facade, it also is home to two top notch science institutions, continuing the legacy of the Schebek Palace as a center of economic education. 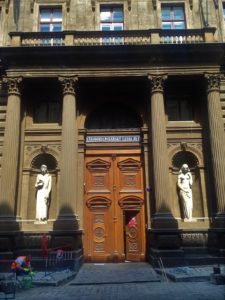 The house science and film are equally attracted to: Schebkův palác

What once were the premises of Praga cars, which are well known for their specific building technique, a new art space is emerging! Where individual pieces once became one functional vehicle, painters, photographers, fashion designers and other creative minds now have a space to create and present their art. The clever conversion of Vysočany’s premises is supposed to officiate as a new home for art, new trends and fresh ideas! If you are looking for some creative inputs and work of others, you should definitely not miss out on Pragovka!

To all the fellow literature fans and writers: This is the spot you were looking for! Thanks to the Museum of Czech Literature, which bought the former residence of foreign diplomats in 2011, this humble looking ‘Vila’ is the home of the department of collection, presentation and digitization.

During your tour you will learn a lot about Czech literature and even get to peak into Ladislav Mňačko’s office. Mňačko – a system critical author – was the most translated writer of Slovakia, whose books have made it all across the globe. You might have heard his name in correlation with the books ‘The Seventh Night’ or ‘The Taste of Power’.

The best part? After all the impressions thrown at you, the adjacent garden of Malá vila invites you to take a breath, process and will maybe even inspire you for your next piece!

Upon entering this tucked away place in the very corner of Malé náměstí, you are in for a serious walk through history! The Ericsson Palace – also known as U Anděla (“At an Angel‘s”) – dates back to the Middle Ages. Inspired by the St. Vitus Chapel at Prague Castle as well as the work of the famous Czech Gothic architect, Matej Rejsek, this stunning building is bound to throw you back in time!

An uniquely placed chapel within a ribbed star vault and Gothic cellars with preserved stone vaults await you in the building the Polish institute resides in. On your tour through this magnificent place, you will encounter not only stunning architecture but remains and traces of all kinds of historical periods. 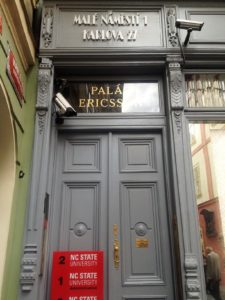 Hiding in the hustle and bustle of Old Town: Palác Ericsson

Over 150 years the huge Bubny station and its garages and depots were used exclusively by the train company, waiting to be put to a new, better use. Three years ago, the Soa Memorial Prague Initiative has finally given the train station with a dark history a new beginning: A modern cultural and education center for recent history shall be built and not only teach but also commemorate the terrible events which took place during the Protectorate and World War II.

On your tour “New Bubny station” you get to see what the future Bubny center will have in store and get to see the architectural study for the Memorial of Silence.

Find out about the dark chapters of Bubny station and see what great things can arise from something terrible.

Walk through a house that has outlasted wars, totalitarian regimes, devastating floods and the tick of time! The baroque Michnuv palace – once a noble residence of Michna of Vacinov  – was rebuilt by the Czechoslovak Sokol community after being pronounced a ruin once World War I had been over. The Sokol community, who bought the palace from the city of Prague in 1921, managed to reconstruct and complement the devastated area. The ruin was reconstructed and afterwards used as a gymnasium; its opening ceremony in 1925 was attended by the 1st Czechoslovak president, T.G. Masaryk.

But Tyršův dům and its brother did not get the quiet future everybody hoped it would have: World War II struck and during Prague’s occupation, Tyršův dům served as a seat of the Hitlerjugend and the Kuratorium! It was only after the war that the building was taken into the hands of the Czech government and eventually returned to the Sokol-community in 1990. Fate struck again in 2002 and the building fell victim to the flood of the Vltava River. But even that catastrophe did not manage to disrupt the bonniness of this stunning palace.

Nowadays, you can walk up the breathtakingly beautiful staircase of the unlucky Michna palace or climb up to the roof of Tyrš House – magnificent views of Lesser Town included! 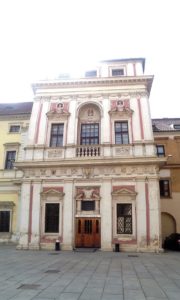 The building that withstood wars and natural catastrophes without losing its beauty: Michnův Palác

Enter the extravagant house of the first Prime Minister of Czechoslovakia, Karel Kramář. When Kramář was elected, he spared no expense to build one of the most luxurious and elegant mansions in Prague. Kramář’s and his Russian wife’s life seemed perfect. But their luck faded, once they had moved into the newly built Vila Kramář…

Only a week after the couple has settled into their new home, Kramář gets arrested and imprisoned for treason against Austria-Hungary – also, because he married a Russian citizen. His treason is to be punished by the death penalty. The decision is never executed and Karel is later released thanks to royal amnesty.

Are you a little rebel? Then you will definitely be able to sympathize with the architect of the Legiobank building! Josef Gočár dared to do, what no one else before him did. In 1923, he built this structure in the national style which made many people in time wrinkle their noses.

But Josef Gočár’s courage paid off: Shortly after the Legiobank opened, they became so successful that the adjoining premises, which now house Archa theater, were built. Though state of the art back in the 1920’s, Archa theater and its neighbour – including pneumatic tubes for sending important documents to another part of the building which were in use till 1998 – are stunning to look at and will definitely impress its visitors.

Have we mentioned that when walking around in this building you have entered one of the most inaccessible bank premises? Thrilling!

A courageous mission of an architect that paid off: Palác Archa

Come and enter one of the oldest houses in Prague! This incredible Renaissance-building with a baroque third floor just off Melantrichova street was built in 1567 and has its own two furry watchmen: The two stone bears above the door were installed by Bonifaz Wohlmut, a court architect of the 16th century.

It is said that the two bears are meant to represent the star constellation of the little and big bear (Ursa Minor and Ursa Mayor). Upon closer inspection though, one can clearly see that the two branches the two men next to the bears hold are different; one of them is still green and blossoming, while the other one is dry; an homage to the cycle of life?

Not only the bears make it worth checking out this locked door in the midst of Old Town; the house of the two golden bears was built from two Gothic houses in the 1500s; the remains can still be found in the basement of the Gothic structure and even more: Legend has it that secret corridors and underground tunnels connect the house with the Old Town City Hall and the Church of Our Lady before Tyn. Though never proven, it is said that these tunnels were used by alchemists to reach sites all over Prague – maybe it is going to be you who finds the entrance to the secret corridors? 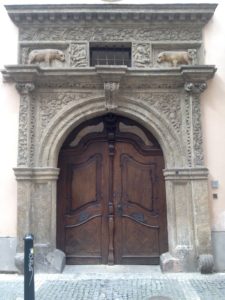 Curious? Then grab your jacket, call up some friends, pack some water and set out for a journey through history, architecture and culture!

Haven’t found what you are looking for or want to explore more? We are sure Open House Praha’s website will have something in store for you: Full Program