Prague’s Jewish Quarter (“Židovské město” in Czech) is one of the most impressive places in the capital of the Czech Republic. Josefov, as the quarter is officially named, is at the same time beautiful and wrathful, due to its complicated history. It used to be the largest Jewish ghetto in Europe, and its Old Jewish Cemetery is the most remarkable of its kind on the continent. 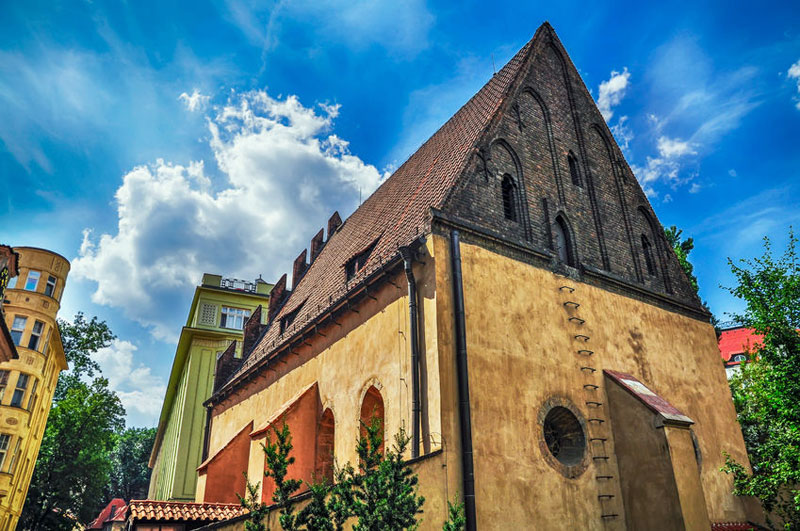 Many cities used to have – or still have – the so called “Jewish quarters”, where the Jewish minority lived. Apart from Prague, we can for example name Jerusalem, Seville, or New York. Those quarters were quite often in the form of ghettos. The Jewish quarter of Prague, since 1992 listed as a UNESCO World Heritage site, is definitely one of the most significant ones and if you are visiting Prague, you should definitely see it. Not only as a reminder of a tragic part of the world’s history but also for its undeniable beauty and charm.

The Prague Jewish Quarter (“Josefov”) used to be called “Jewish Town” until 1850, and its history is very long and dramatic. It is named after the Holy Roman Emperor Joseph II (“Josef II.” in Czech), who emancipated the Jewish population, making the Jews citizens with equal rights. Before that, the quarter had been called “Jewish ghetto”.

Historically, the quarter was mentioned as “Jewish” for the first time in 1096, and was founded after other Jewish settlements were destroyed during a pogrom. Since 1215, when the Fourth Council of the Lateran ordered segregation of the Jews from the Christian population, the quarter took on the character of a ghetto. In 1389 there was yet another pogrom, during which a great part of the ghetto’s inhabitants were killed, and several more took place in the 15th and 16th century when the Jews were repeatedly banished from the country.

During World War II, the Jews were first obliged to wear the yellow Star of David visibly on their clothes and then deported to the concentration camps, where the tragic and monstrous Holocaust took place. The deserted Jewish Quarter became a storage space for their confiscated property. Since a lot of property stayed in the hands of the Jewish Quarter after the war (because the original owners were murdered in the concentration camps), the Jewish museum became the second biggest in the world.

The number of Jewish Quarter residents started to drop again since the half of the last century due to business use of the quarter and foreign travel expansion. This trend became even more significant after the Velvet revolution and by the end of 2013 there were only around 1400 residents.

2. The Golem of Prague Legend

Rabbi Loew once met the Holy Roman Emperor Rudolph II, a lover of alchemy, and that is probably where the legend of the Golem stems from. In Jewish folklore a Golem is a statue brought to life by a human. As the legend tells, Rabbi Loew created his famous Golem (which he called Josille) out of clay and made it alive by inserting a roll (“shem”) in its forehead. The Golem was supposed to protect the Jewish ghetto from the Christians, who attacked it often. 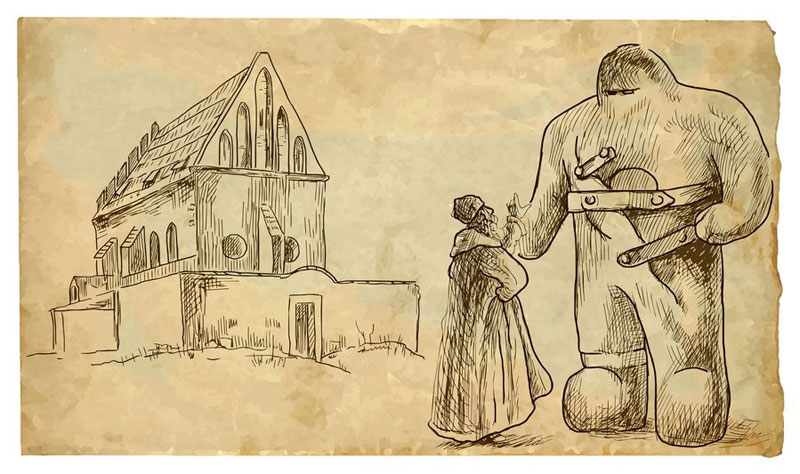 The Golem was getting stronger and stronger each day, so Rabbi Loew had to take out his power (shem) from time to time to weaken him. One day he forgot to take out Golem’s shem, and Golem was overpowered and couldn’t handle himself. He went out to the streets and started crushing everything. Eventually, the Rabbi found the Golem, told him to stop, and ordered him to take a rest in the attic of the Old-New Synagogue.

Rabbi Loew then went to the sleeping Golem and said the magical formula backwards. The Golem started to crumble until there remained only dust, and from then it was forbidden to visit the attic for many decades. The first person to enter the attic was Rabbi Landau in the 18th century. He came back all shaking and pale, and again forbid anyone else to enter the attic. Golem’s relics were never found until today.

The Old Jewish Cemetery is the most remarkable of its kind in Europe, and was in operation from the first half of the 15th century till the second half of the 18th century. At the cemetery, which was in 1995 proclaimed a National cultural heritage, you can find almost 12 000 gravestones (and the number of graves is even higher). 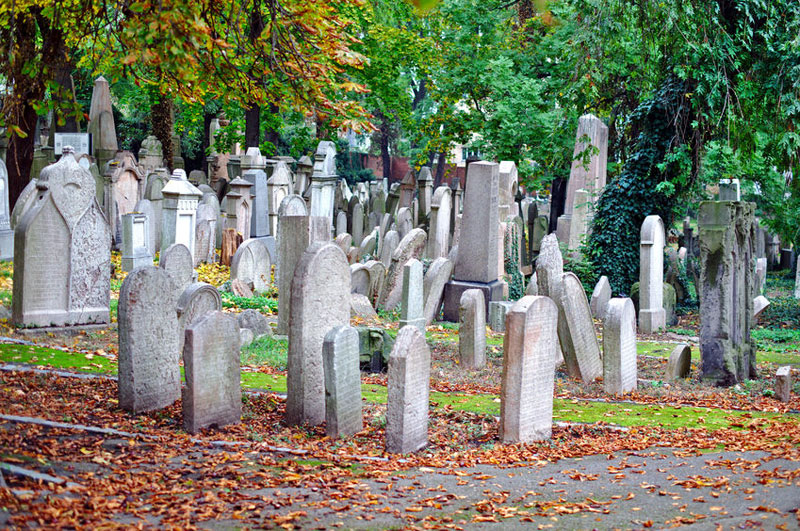 There is a significant number of important Jewish people buried there. These include the chief Rabbi of Prague David Oppenheim, and the Jewish teacher, mystic, philosopher (and according to legend the creator of The Golem of Prague) Judah Loew ben Bezalell, known as Rabbi Loew.

Synagogues were the most important places in the Jewish ghetto. They used to serve not only sacral purposes, but they were also the place where Jewish teachers would meet their students. What’s more, until the Prague Jewish Quarter got its own city hall, all public matters used to be solved there. 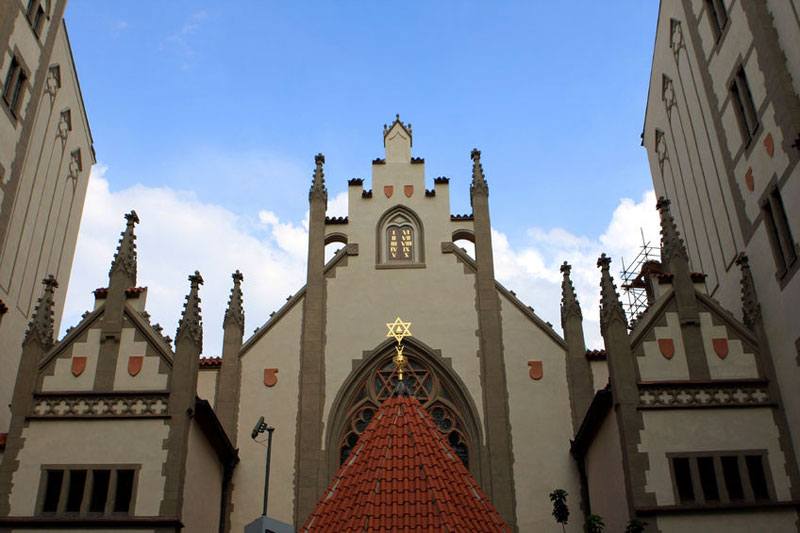 Maisel Synagogue in Prague Was Built in 1592

Also the Maisel Synagogue (from 1592), The Pinkas Synagogue (1535) and – the biggest one – The Klausen Synagogue (from 1694), are located in the Prague Jewish Quarter and should not be missed when you are visiting the Czech Republic´s capital.

The Jewish museum in Prague, one of the oldest Jewish museums in Europe, is very unique. It is the most complex institution of its kind, including among other things four historical synagogues, the Old Jewish Cemetery, its own gallery, archive and library, an educational centre and a Ceremonial Hall with very rare expositions under its jurisdiction. There are many exhibitions that take place there, including temporary and travelling ones. The Jewish Museum of Prague also hosts a lot of cultural and educational events.

The monument of Franz Kafka, the famous writer, who was born into a German-speaking Jewish family in Prague, is located next to the Spanish Synagogue. The statue was unveiled in 2003 and its design was inspired by one of Kafka’s short stories (“Description of a Match“). The sculptor Jaroslav Róna created the statue out of bronze and it is 375 centimetres tall and weighs 800 kilograms.

The Jewish Quarter (“Josefov”) is located between the Vltava river (“Dvořákovo nábřeží) and the Old Town Square. All the sites of the Jewish Museum are located in the area of the former “ghetto”, within comfortable walking distance of each other.

The Jewish Museum’s sites are open daily from 9 AM to 6 PM during summer and from 9 AM to 4:30 PM during winter, except Saturdays and Jewish holidays. The admission fees depend on the sites chosen. There are also various tours offered. See the table below for details including links to buy tickets online:

Please note tickets to the Jewish Museum in Prague includes a visit of the following places: Maisel Synagogue, Pinkas Synagogue, Old Jewish Cemetery, Klausen Synagogue, Ceremonial Hall, Spanish Synagogue, and temporary exhibitions in the Robert Guttmann Gallery. Basically everything besides the Old-New Synagogue. While tickets to Prague Jewish Quarter include everything.

All visitors should respect the cultural significance and solemnity of the Jewish Museum’s sites and thus wear appropriate clothes (men should cover their heads in selected sights).