Thanks to low production costs and an established tradition of film making, Prague has long been a popular destination for film makers. Milos Forman’s 1984 production of Amadeus paved the way for Hollywood blockbusters such as Mission Impossible in 1996, Les Miserables in 1998, Van Helsing in 2004, Casino Royal in 2006 and many, many more.  Most recently in 2016, the film Anthropoid was shot in Prague. This was hardly a surprising choice as the film documents real events which took place in the city in 1942. We have put together a list of some of Prague’s most beautiful and significant film locations along with what was filmed there and some interesting sights to see along the way.

Strahov monastery is a very popular location for filming. It masqueraded as the House of Lords in Casino Royal (2006) and as the British Museum in The League of Extraordinary Gentlemen (2003). The Monastery has played the role of both the British Library in From Hell (2001) and the Danish library in The Prince and Me (2004).

OUR TIP Strahov Monastery is home to one of Europe’s most significant collections of Gothic, Baroque and Rococo paintings dating from the 14th-19th century.  It also boasts one of the most beautiful libraries in the world and on top of all of that, the monks brew their own beer, which can be purchased in a small pub on the monastery grounds.

Tours of the Monastery’s library and picture gallery are available everyday from 9.30 am – 17.00 pm. Admission to the library is 100 CZK and to the picture gallery is 120 CZK, but there are concessions for families, students and children. 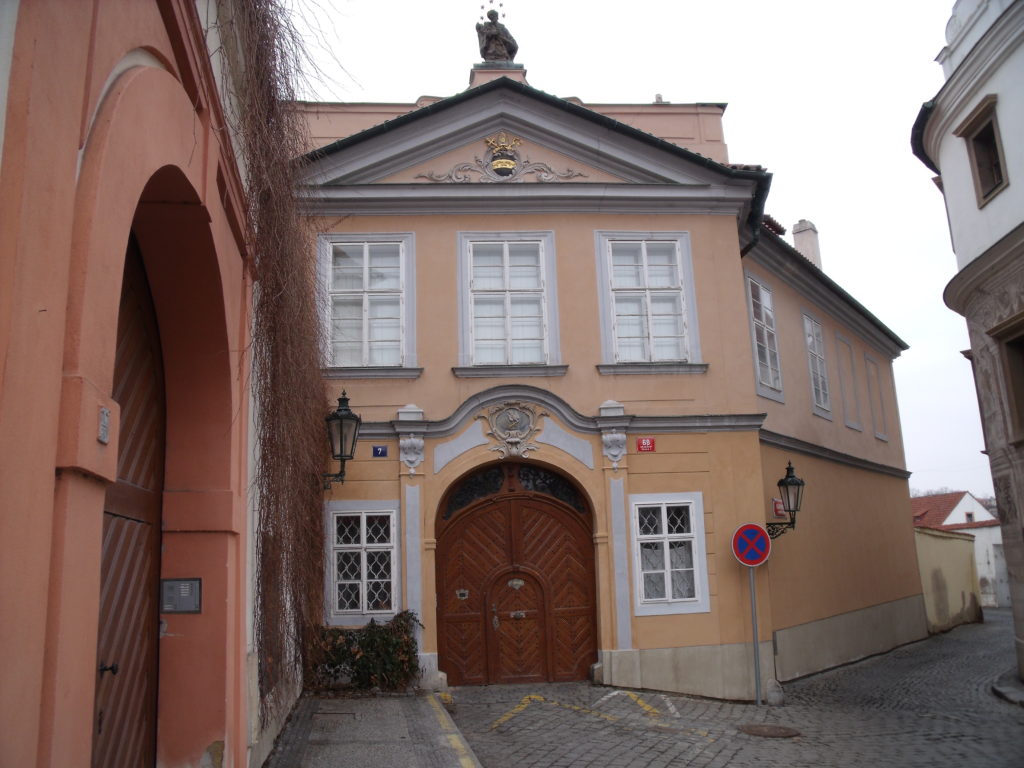 OUR TIP The Salmovsky Palace café has a beautiful terrace, with stunning views over the city. The café serves main meals, snacks and drinks and is open every day 10.00-18.00.

The Castle’s Matthias Gate stood in for Buckingham Palace in Shanghai Knights (2003) and the Castle’s west facing entrance was used as Crown Prince Leopold’s Vienna Palace in The Illusionist (2006).

OUR TIP One thing that you must experience if you are walking through the castle grounds is the bizarre amphitheatre.  It is a concrete circle partially surrounded by concrete steps. If you stand on the circle and speak, you voice will echo back at you in a somewhat surreal manner. If you enter the castle via Hradcanske Namesti, you will find the amphitheatre just to your left.

This 13th century gothic church is one of Prague’s most famous landmarks. It’s striking and beautiful interior was put to excellent use in creating the perfect atmosphere for a costume ball in Van Helsing (2004). The church is open to visitors everyday from 9am-4pm at a charge of 70 CZK. 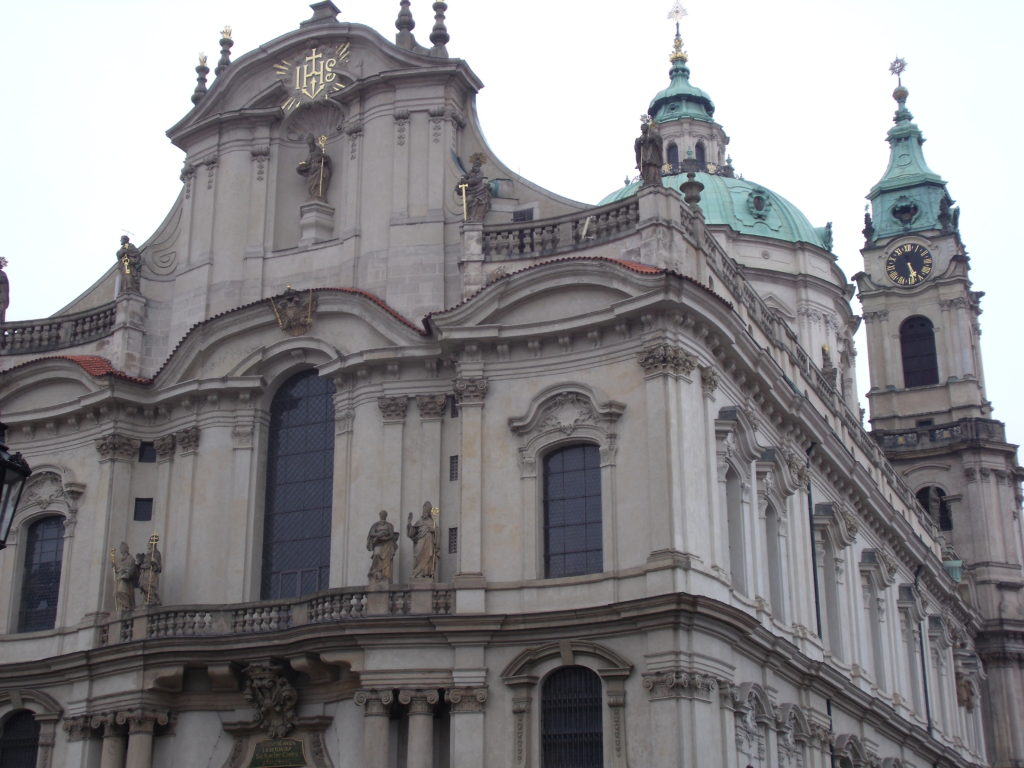 The impressive gothic exterior of the Church of Saint Nicholas

If you either walk, or take a ride on the funicular to the top of Petrin Tower, you will be rewarded with stunning views, beautiful gardens and even a mirror maze. Amongst other attractions at the top of the hill is Prague’s very own mini Eiffel tower (Petrinska Rozhledna). It is this very same tower which the small boy, Kolja, is taken to visit in Jan Sverak’s Oscar winning film Kolja (1996).

OUR TIP Climb the 299 steps to the top of the tower and enjoy a 360 degree panoramic view of the city. On a clear day you can see most of the region of Bohemia from the tower’s top viewing station. The tower is open from 10.00 am – 18.00 pm.

When James Bourne spends his first night in Zurich sleeping on a park bench during Bourne Identity (2002) and is rudely awoken by a police officer, he is actually in Kampa Park. The street Na Kampe (which leads to the park from Charles Bridge) was the location used to film a car exploding outside of the US embassy in Mission Impossible (1996) 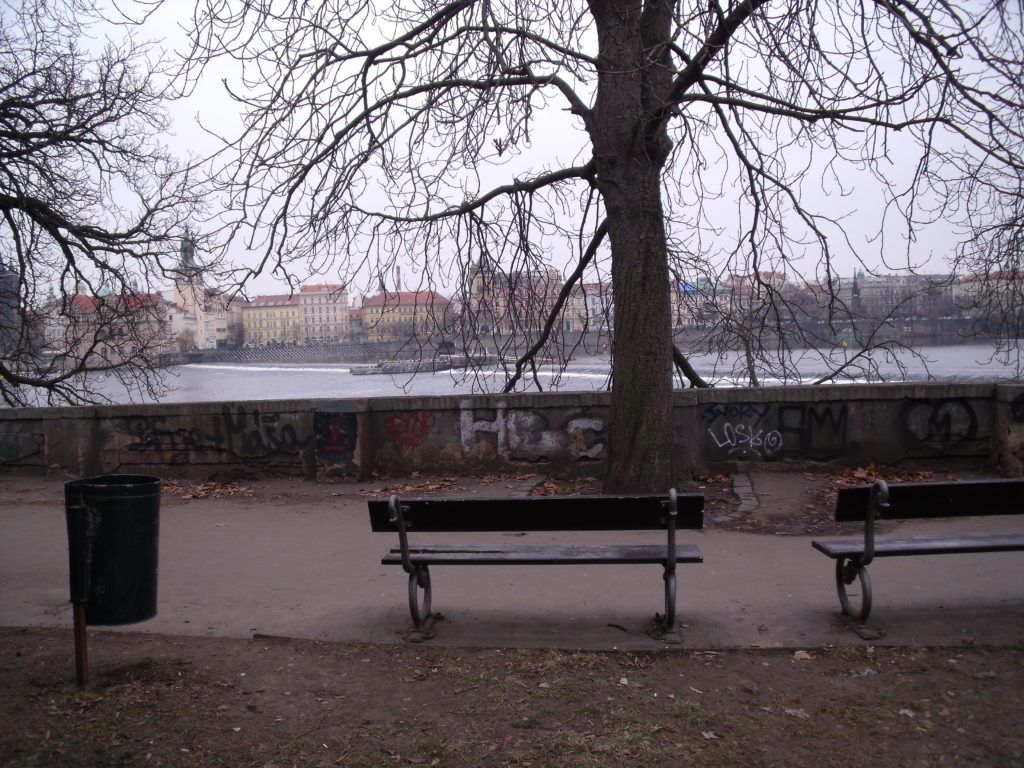 A nice place to grab a nap…

OUR TIP The Kampa Gallery is one of the city’s finest modern art galleries and generally exhibits the work of Czech painters. The gallery holds a permanent exhibition of paintings by Frantisek Kupka and Otto Gutfreund and from January 28th will be hosting an exhibit entitled “Czech and Slovak art of the 1960’s”. If you don’t have time to take the full tour, the gallery’s courtyard is free to enter and contains a number of sculptures and installations made by Czech artists. The Gallery is open every day from 10.00 am – 18.00 pm. For more information about ticket prices, check out their website.

The exterior walls of Senovazne Namesti 13, were used by film makers during the scene in which James Bourne makes a nail biting escape from the US Embassy in Bourne Identity (2002). 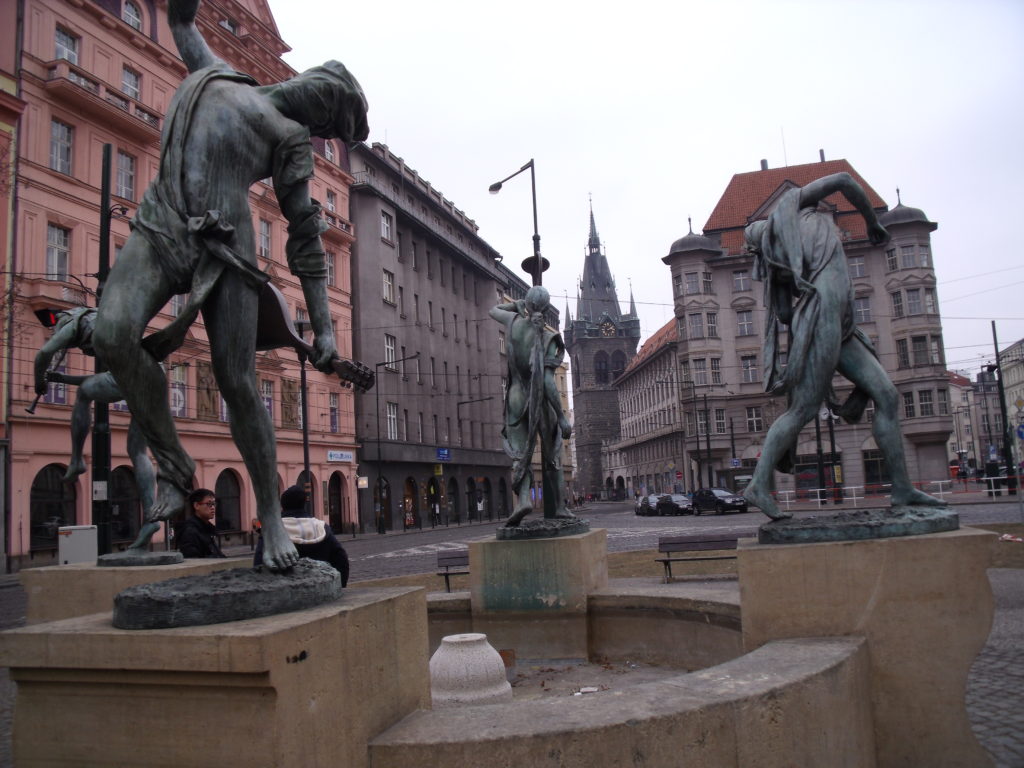 Czech Musicians dancing around a fountain. 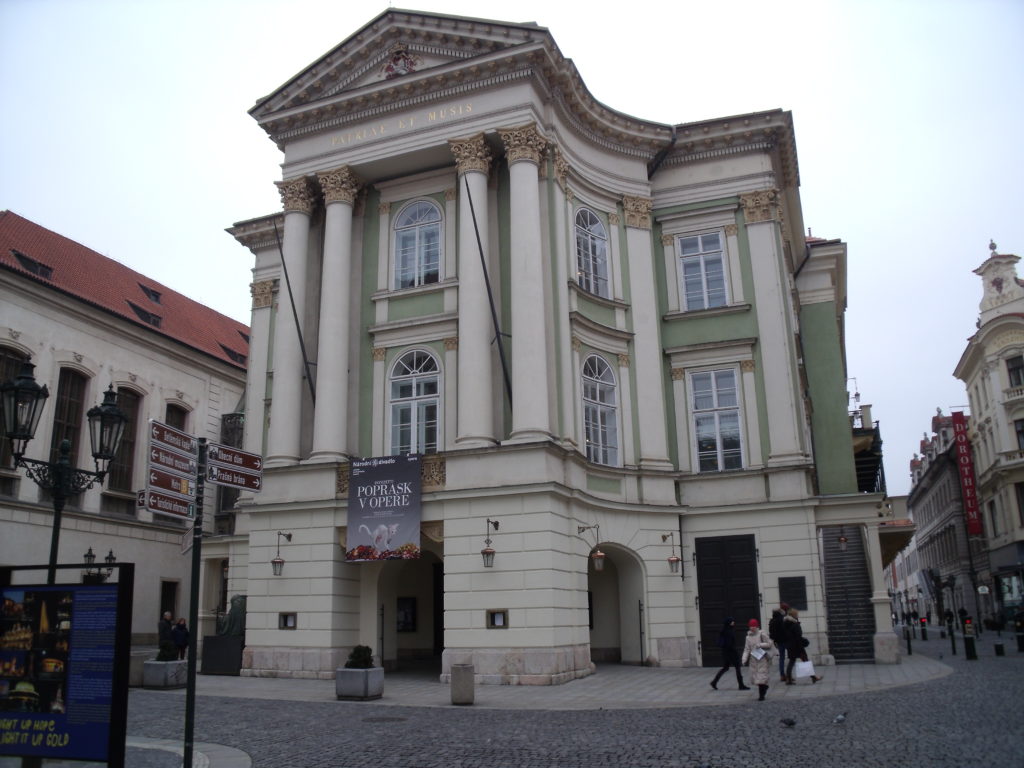 OUR TIP To see a performance at the Estates Theatre is a fantastic opportunity. Check out their website for details about what is showing and ticket prices. 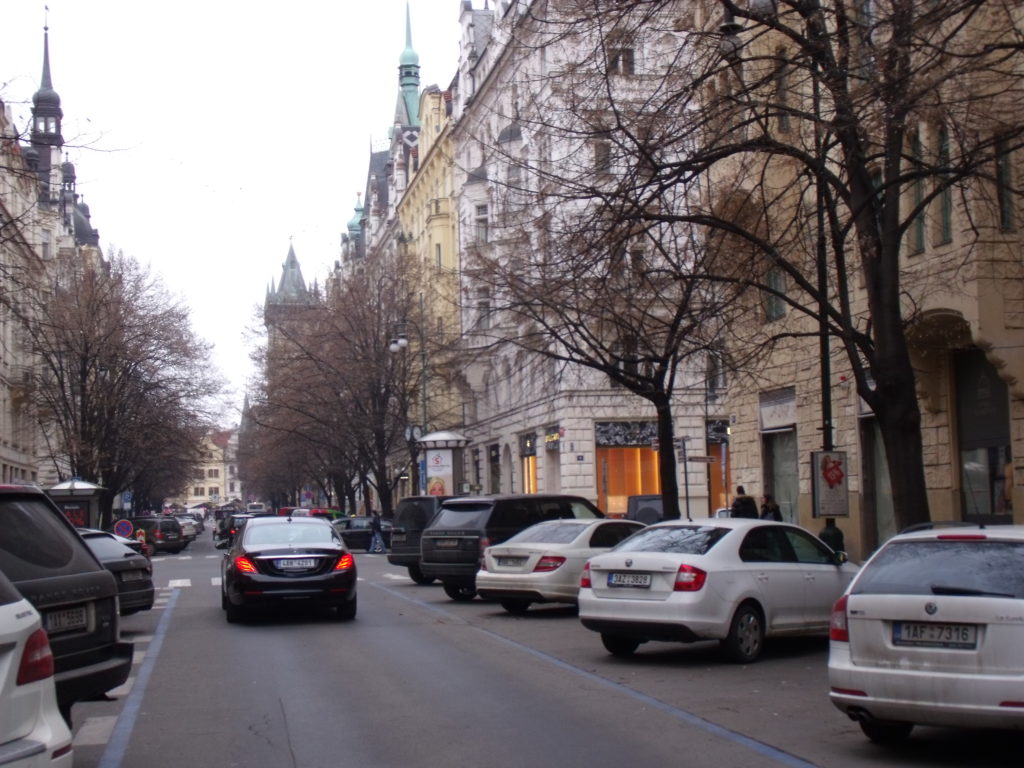 The elegant Parizska street in the heart of Prague’s old town.

Although The Chronicles of Narnia (Prince of Caspian) was filmed in Prague, the vast majority of the filming was done in the famous Barrandov Studios. The only scene not shot in studio was filmed on this street (between the Rudolfinum and what was until recently, the Museum of Decorative Arts).  The interior of The Rudolfinum is also used in both The League of Extraordinary Gentlemen (2003) and in Hannibal Rising (2007). 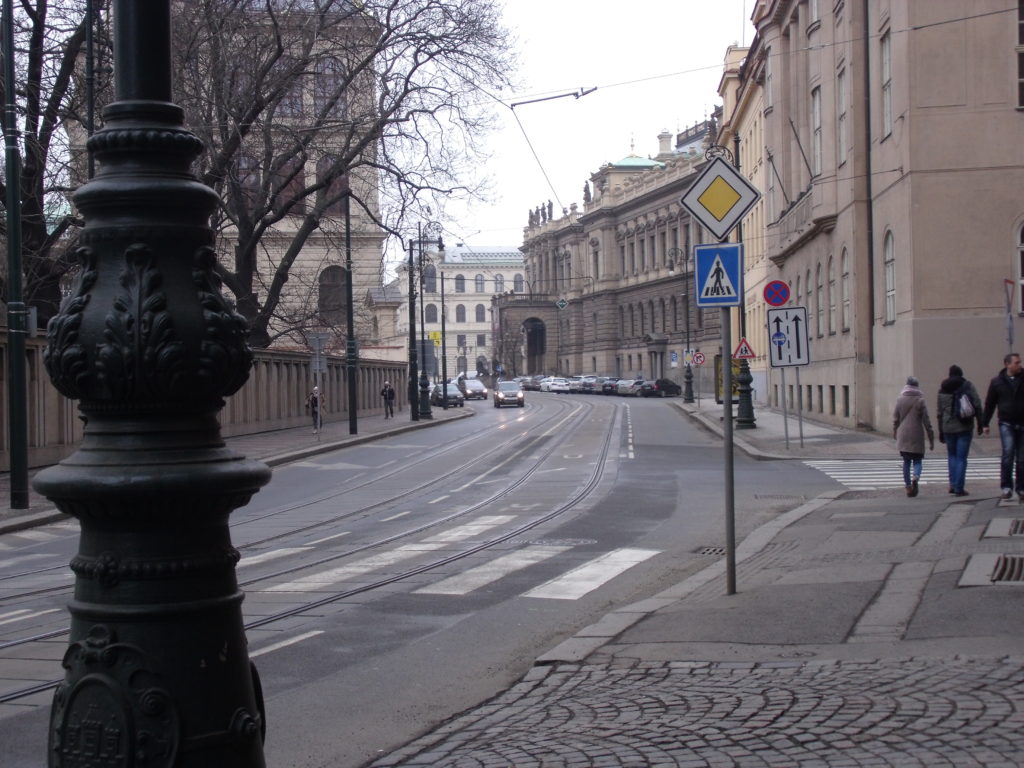 17 Listopadu Street, looking towards the Rudolfinum

OUR TIP The Rudolfinum is home to the Czech Philharmonic Orchestra and is an exhibition space for modern and contemporary art. Check out their website for details about exhibitions and coming events.

Prague was recently used in the making of the 2016 film Anthropoid. This film tells the true story of two heroic Czech Parachutists, who assassinated Reinhard Heydrich (head of the Nazi security police) in Prague on May 27th 1942. This is the very church where they hid as Nazi forces lead a zealous manhunt to track them down and the location was unsurprisingly used during the making of the film. 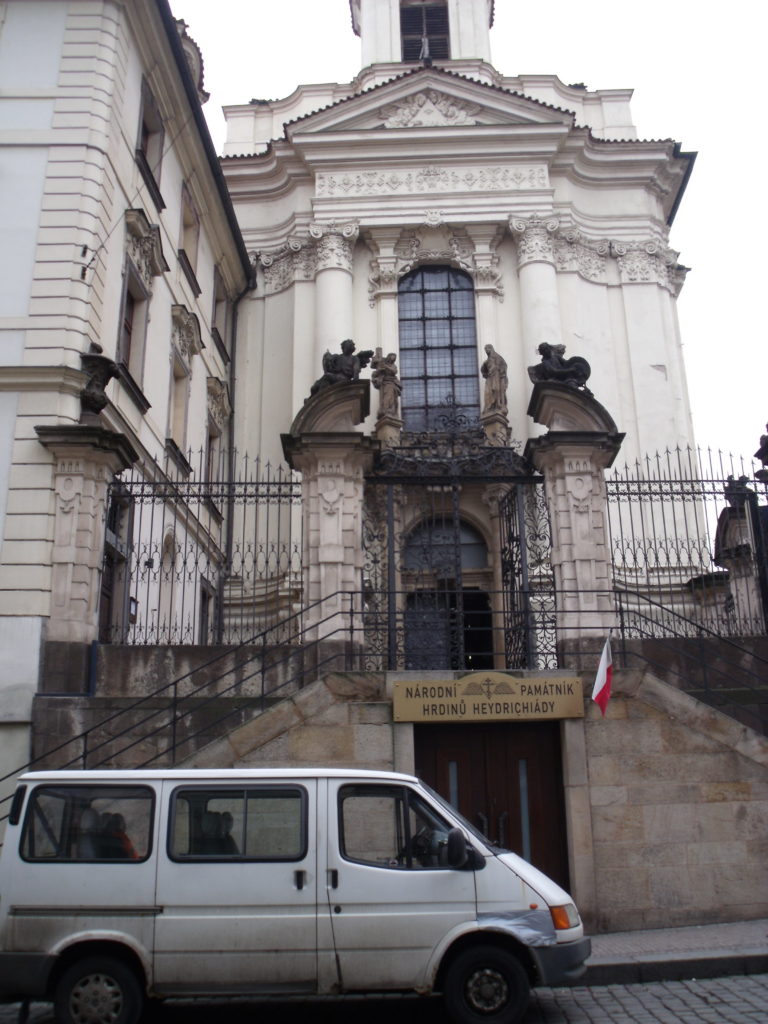 The entrance to Saint Cyril and Methodius Church

OUR TIP This church is now home to a museum, where you can learn more about the assassination, the events which led to it and the horrific events of its aftermath. You can also visit the crypt, where the two parachutists eventually died. The museum is open Tuesday-Saturday 09.00 am – 17.00 pm.