During winter, the Czech Republic’s capital city and “the Heart of Europe” shows many faces. If you are lucky enough to find it covered in pure white snow, its romantic charms will dazzle you. But even if the temperatures are above zero, Prague has a lot to offer in December, January, and February.

Since Prague is situated in the temperate latitude of the Earth, the city has a temperate climate with quite chilly winters. At the same time, average precipitation is at its lowest during the winter months, so there is usually not a lot of snow in Prague. When there is a lot of snow, the city looks beautiful under the pure white pillow at first, but snowdrifts melt fast and in some places sometimes turn into a lot of mud.

OUR TIP Check out our 8 tips on how to enjoy Prague in Winter.

Recommended Activities for Winter in Prague

The average monthly temperatures in Prague during the year are in the table and charts below, both in Celsius and Fahrenheit. The winter months are December, January, and February.

Temperatures in winter may be very cold. On average you can experience 4°C (39°F), but the minimum values can go down below 0°C (32°F). For more details read below about the climate in specific winter months (December, January, and February).

The best thing about winter weather, of course, is snow, which makes the whole city romantic. Usually, the snow in Prague only stays for a couple of days, because the temperatures are normally slightly above freezing.

The amount of rainy, snowy, and clear days is presented in the table and chart below:

5. Prague Weather and Temperatures in December 2019 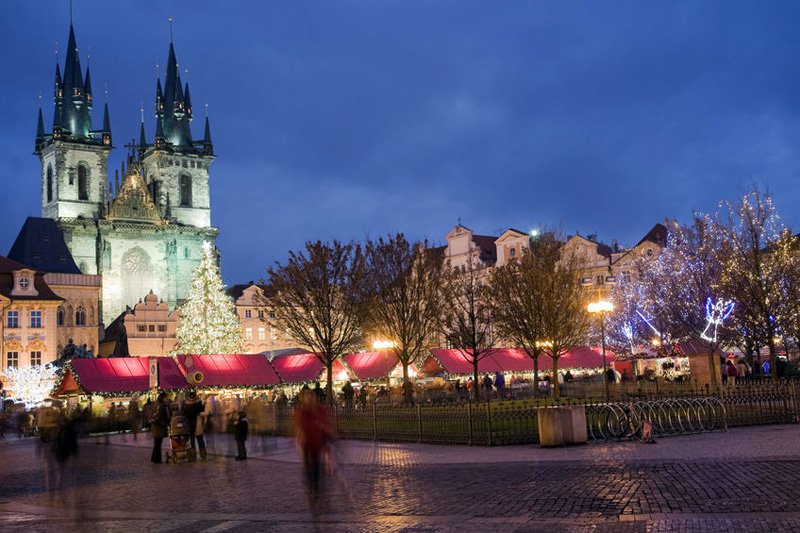 During the advent, Prague dresses in festive lights, Christmas decorations, and celebratory mood. One can visit numerous Christmas fairs, listen to Christmas carols sung in the streets, or see wonderful displays of the Nativity in Churches.

If you want to experience the very essence of Prague’s Christmas, visit the Old Town Square, where the biggest Christmas tree in the Capital always stands, surrounded by a big Christmas fair rich in variety. Among other things, you can warm up with mulled wine and grog (rum with hot water) there while shopping for hand-made Christmas decorations or enjoying public Christmas carol singing.

Each year on December 5th, Czech people celebrate Saint Nicholas Day. According to tradition, every family with children receives a visit from the trinity of characters – St. Nicholas (Mikulas), the Angel, and the Devil. Kids need to sing a song to them and will receive candy as a reward for good behavior. Bad kids get only a sack of coal or potatoes from the Devil. If you are lucky, you can meet this trinity walking through the city. Some Devils may be really scary and even grown-up people are afraid of them!

To get into the Christmas mood, even more, visit the Bethlehem Chapel on the Bethlehem Square, to see the traditional display of Nativity scenes, usually accompanied by a show presenting items made by woodcarvers and also singing of Christmas carols. It also offers the unique wax Nativity scene: Little Jesus with Maria made from sheep fleece, and Prague’s Nativity scene with Rudolph II and Franz Kafka, as well as such Czech fairytale characters as Křemílek with Vochomůrka and Rumcajs with Cipísek.

6. Prague Weather and Temperatures in January 2019

If you can plan your trip to Prague at the juncture of December and January, do so, because this nightlife metropolis is a great place to celebrate New Year’s Eve. Prague’s nightlife is legendary throughout the year, but on the night when December ends and January begins, the Czech Republic’s capital goes almost crazy.

New Year’s Eve in Prague is simply party night. Prague’s restaurants, bars, and clubs are full, and the atmosphere reaches a climax as midnight approaches. As the clock strikes twelve, revelers gather to watch fireworks. You can best enjoy those from somewhere overlooking the Vltava river (for example from Charles Bridge or Prague Castle) or from one of the main squares (Old Town Square or Wenceslas Square).

When you start feeling cold walking through the old center of Prague, you can warm up in one of Prague’s numerous museums. And, of course, you can also learn about Prague’s art, history, music or literature there. The most famous Czech museum is, of course, the National Museum, however, its main historical building at Wenceslas Square is currently closed for reconstruction. The re-opening of the historical building is supposed to happen in 2019 when the National Museum will celebrate 200 years of its existence, but you can still visit other buildings of the National Museum in Prague. For example the Czech Museum of Music in Karmelitská street, Prague 1, or Antonín Dvořák Museum (Ke Karlovu street 20, Prague 2).

7. Prague Weather and Temperatures in February 2019

Ice Skating in the Center of Prague is Fun

Before spring arrives to Prague, you can enjoy some fun winter activities in the Czech Republic’s capital. There are, for example, ice skating rinks built in various locations in the city during the coldest months of the year, where you can rent skates and enjoy a fun ride on the ice to get your heart pumping. For ice-skating in a charming, almost fairytale-like atmosphere, try out the rink on the Fruit Market (Ovocný trh) in Prague’s Old Town. You can skate here for free until late evening, and the rink also hosts many cultural events.

For those of you who are romantic at heart, it is a great idea to celebrate Valentine’s Day in Prague. This popular February holiday is even more romantic when you are enjoying it in the magically beautiful Czech capital, with its castle, luxurious restaurants, and shops selling precious jewelry. Call ahead to the restaurant of your choice to make a reservation and enjoy an amazing candlelit meal with your significant other. Prague is the ideal location for an unforgettable romance…