The Clementinum (“Klementinum” in Czech), the second biggest complex of buildings in Prague after Prague Castle and one of the biggest in Europe, has always been a living center of education and culture. This large area of historical buildings, spread across around two hectares of land, includes among other things the National Library, home to many incredibly valuable manuscripts and books. 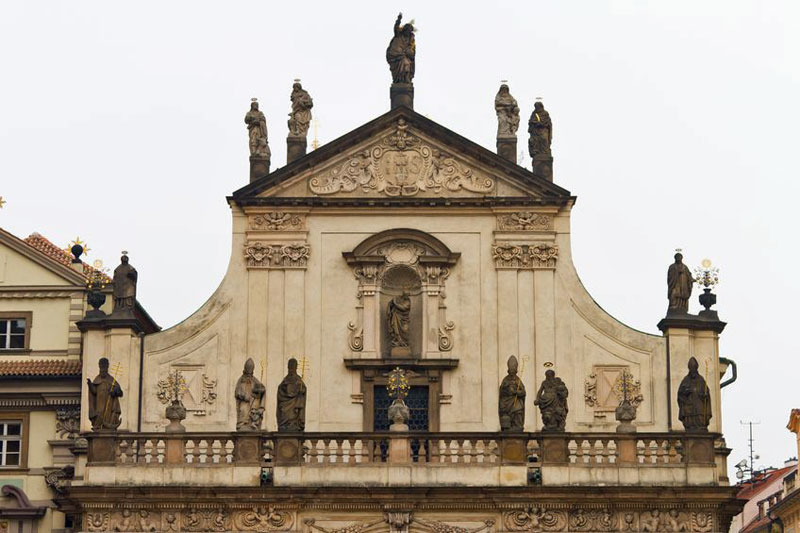 Clementinum is the Second Biggest Complex of Historical Buildings in Prague

Spreading across the “Karlova” street and “Křížovnická” street and facing with its main frontispiece the “Mariánské náměstí” square, the Prague Clementium belongs among the most attractive sights of the Czech Republic’s capital and has a great historical, educational, and cultural meaning to all Czechs.

The history of the Clementinum is long and rich, and nowadays the complex is still a dignified center of education and culture for Prague and indeed the whole of the Czech Republic. The complex was founded in 1556 by the Jesuits, members of a male religious congregation of the Catholic Church called The Society of Jesus. In the 17th century the Jesuits started to expand the complex, which took more than 170 years. As a result, one can find many different architectural styles within the complex of buildings.

3. Buildings in the Clementinum Complex

The National Baroque Library of the Czech Republic

The National Library of the Czech Republic, seated in the Baroque complex of Clementinum near Charles Bridge, is the central library of the country. Directed by the Ministry of Culture of the Czech Republic, it controls the system of all Czech public libraries (except for the privately owned ones) and its book-stock preserves all books, manuscripts, and other publications issued in the Bohemian land since 1807. There are also much older documents, the oldest of which are Greek papyri from the 1st century.

The National Baroque Library Has Been Opened in 1722 (image source Klementinum.com)

The National Library is one of the biggest and oldest European libraries, storing and making accessible over six million documents. Its beautiful Baroque library hall was built in 1722 and is decorated with amazing science and art themed fresco paintings. These include a picture of the Holy Roman Emperor Joseph II (“Josef II.” in Czech), who provided the library with collections confiscated from the cancelled monastic libraries, and a depiction of Peter Canisius, the founder of the Czech Jesuit province.

In the centre of the Baroque library hall, one can see an amazing collection of globes, created by the Jesuits. The Vyšehrad Codex, a facsimile of which is exhibited as a part of the library’s guided tour, is probably the most attractive item of the collection. The Latin coronation Gospel Book is one of the most valuable manuscripts ever, and has an estimated value of 40 million EUR. 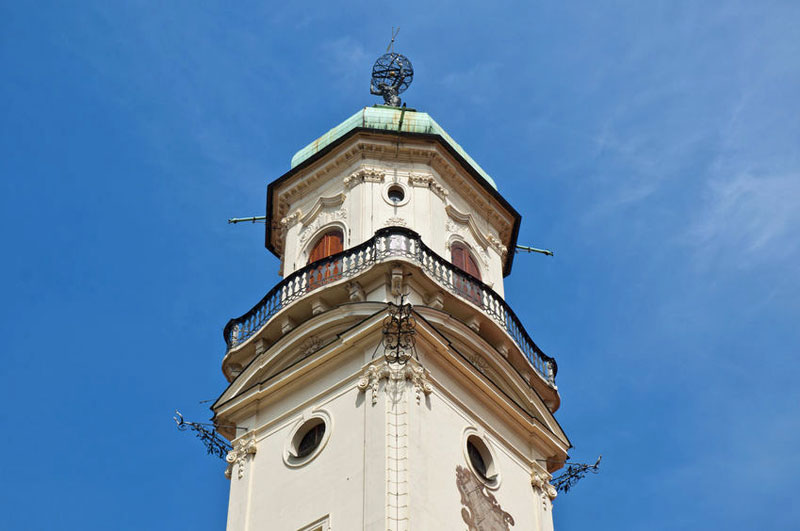 When visiting the Prague Clementinum, you surely do not want to miss its amazing Astronomical Tower. Originally, the Jesuits had it built in 1722, and it was rebuilt in 1751. During the rebuilding the tower was equipped with astronomical instruments and, thanks to this, since 1775 the Clementinum has regularly performed a regular meteorological measuring. The Astronomical Tower is 68 meters high with 72 steps leading to its top, and at its dome there is a statue of the god Atlantis. The tower offers a wonderful view of the Old Town of Prague.

Meridian Hall is located on the second floor above the Baroque Library Hall. It was used for measuring, calculations, and determination of noon. There is a string throughout the room which is basically a Prague meridian, and when the sunlight touches the string it signals the arrival of noon (12 a.m.). The last determination of noon was rerecorded in 1928.

Besides the noon string there are also a few astronomical tools which are situated in the southern and northern walls of Meridian Hall. Two wall quadrants were used to measure the angular distance between objects in space and how high they were above the horizon.

Since the Clementinum complex was founded by the Jesuits, it naturally includes some amazing religious buildings. The Cathedral of St. Clement, a Baroque church built between 1711 and 1715, interestingly combines a simple exterior with a very elaborate interior. Sculptures by famous Matthias Braun and a painting by Petr Brandl are the most valuable attractions of the church.

The Church of the Holy Savior, the main church of the Jesuits, was built in the 17th century and amazes with its beautiful dome decorated with wonderful stuccoes. The Italian Chapel of the Assumption of the Virgin Mary is probably its most interesting attraction. It was built between 1590 and 1597 for the benefit of Italians living in Prague.

Probably the most beautiful part of the Clementinum complex, the Mirror Chapel was built in the 18th century and stuns its visitors with numerous mirrors, embedded in the walls and ceiling and reflecting the marble floor. The star shaped decorations of the floor are supposed to evoke the stars in the sky, and the mirrors deepen the space of the chapel, symbolizing the eternity of God. There are two pipe organs in the chapel and also many valuable paintings and ceiling fresco paintings, created by Jan Hiebl and representing the illustration of the Ave Maria prayer. The chapel nowadays hosts many concert productions.

4. Where it is? Location & Map, Opening Hours, Tickets & Entrance Fee

To get to the large Clementinum complex, one can walk from Charles Bridge or from Old Town Square. There are three entrances, one from “Karlova” street, another from “Mariánské náměstí” square, and the last one from “Křížovnická” street (currently closed).

Clementinum is opened daily from 10 a.m. including weekends. Closing time varies per season:

The entrance fee is 220 CZK for adults, 500 CZK for family, 140 CZK for students and seniors and entrance is free for children below 7 years. Tourists with Prague Card are eligible for 25% discount from the admission fee.

Please note the only way how to get there is using the guided tour with guide (read below). All this applies for all Clementinum buildings (Baroque Library, Meridian Hall and Astronomical Tower, Chapels).

UPDATE Unfortunately the guided tours for 2017 have been terminated due to to the legal dispute with the National Library of the Czech Republic, administrator of Clementinum. This applies to all building including Astronomical Tower, the Baroque Library and the Mirror Chapel.

Tours take around 45 minutes and are in the English language. They include visits to the Baroque Library Hall, Meridian Hall, and Astronomical Tower. Tickets can be purchased directly at the Clementinum cash desk.