The Czech Republic’s capital and one of the most interesting European cities – figuratively and also literally – flourishes in spring. On the one hand Czechs belong to a secular nation (over 50% of the population are atheists), and on the other hand, they love all holidays and excel in celebrating them. As a result, you can enjoy rich and rather original Easters in Prague, and there is much more Prague can offer in March, April, and May…

During spring (especially in May), Prague is beautiful and unique because of the blooming trees which you can find all over the city. Also, the temperatures are very pleasant as it’s warm but not hot, so you can peacefully explore the city. Usually, tourists come to Prague at the beginning of April, so March is very quiet but also a bit colder (occasionally you can experience snow). 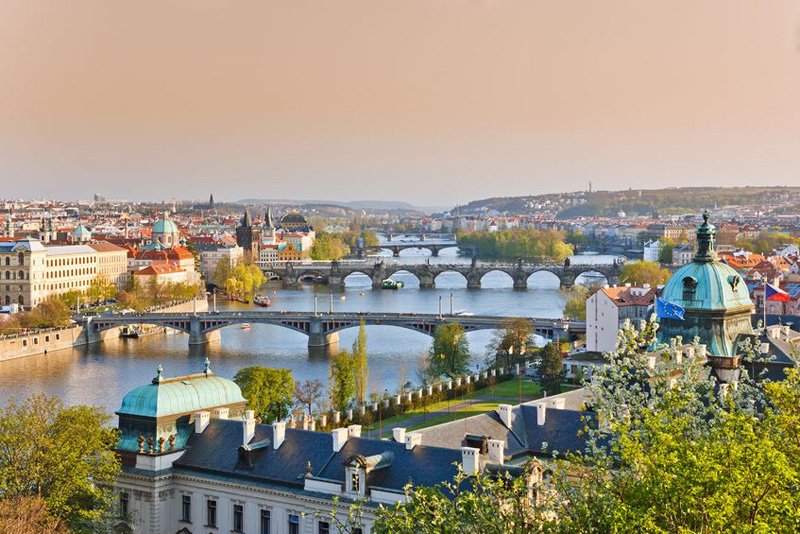 Recommended Activities for Spring in Prague

Average monthly temperatures in Prague during the year are shown in the table and charts below, both in Celsius and Fahrenheit. The spring months are March, April, and May.

Temperatures in spring are very enjoyable as it is warm but not hot as during the summer. You can experience 9°C (48°F) in March and 14°C (57°F) in May, but the maximal values in May can go up to 20°C (68°F). For more details, read below about the climate in specific spring months (March, April, and May).

Spring in Prague is considered to be the rainy season, but the rainfalls are usually short and don’t last more than a few hours. If you are lucky you can experience the last snow at the beginning of March.

The number of rainy, snowy, and clear sky days is presented in the table and chart below:

5. Prague Weather and Temperatures in March 2019

Spring usually begins in the second half of March when temperatures no longer tend to drop below freezing, the snow starts to melt in most areas, and the first flowers appear. It can still be quite chilly and the lows often hover around 0°C (32°F) and can drop below freezing. The highs can climb to 8 – 14°C (46 – 57°F), and dusk comes around 6:15 p.m.

Movie fans and human rights supporters alike come to Prague after the end of Winter to be a part of a significant annual event that has taken place since 1999. One World film festivals take place around the world, and the Prague festival runs annually in March. The international human rights film festival features thought-provoking documentaries, often created by lesser-known artists. 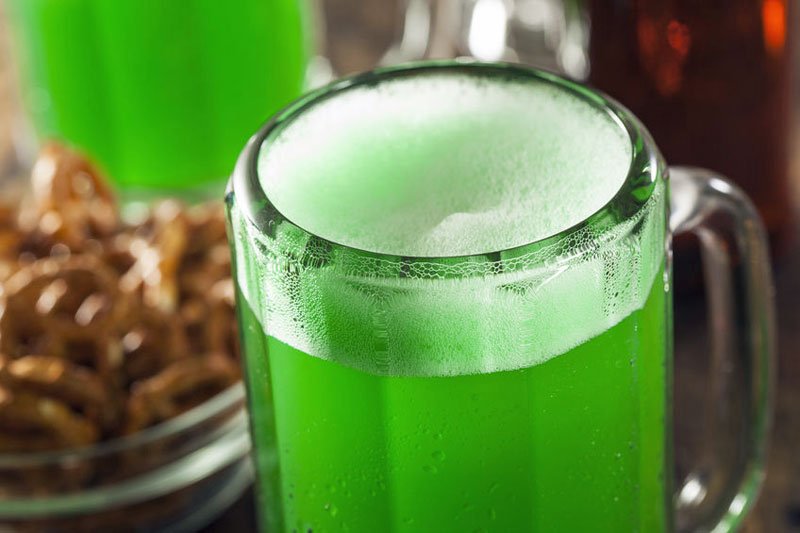 On St. Patrick’s Day You Can Try the Green Beer in Many Places

On a lighter note: As we already mentioned, Czechs (and Praguers especially) love to celebrate and do not hesitate to enjoy any holiday they like in their own style. Thus, it may not come as such a big surprise that the second best place to celebrate St Patrick’s Day (after Ireland, of course) is Prague. Irish bars in Prague tend to extend the concept of St Patrick’s Day a little, meaning that it becomes a St Patrick’s Day Weekend or even week! Expect a lot of Irish flags and a free, lively atmosphere. James Joyce Irish Pub (U obecního dvora 4 – Josefov), Rocky O´Reillys Irish Bar (Štěpánská 32, Prague 1), Caffrey’s Irish Bar (Old Town Square 10), and Dubliner Irish Bar (Týn 1, Old Town) are among the best Irish pubs in Prague.

6. Prague Weather and Temperatures in April 2019

Concerning the weather, April in the Czech Republic is quite unpredictable and can change from sunny to snowy in a matter of minutes. It can also get windy and temperatures can vary quite a bit. Dusk begins around 8 p. m.

Major Prague Events in April – Easter Markets and Half Marathon

If you plan your trip to Prague for the first Sunday after the full moon occurring on or soon after 21 March (in 2019 on the 2nd of April), you will have the chance to celebrate Easter a little differently than you are probably used to doing.

Easter in the Czech Republic is a fun time, when many traditions are still practiced, especially in villages. In different regions, the Easter traditions and customs are rather different. Prague mainly focuses on great Easter Markets, which take place in the Old Town Square and Wenceslas Square. Wooden huts appear and offer local handicrafts and various foods and drinks. Stalls display wooden toys, delicate glassware, original looking candles, beautiful jewelry, dolls in traditional costumes, brightly colored hand-painted Easter eggs, and much more. To eat and drink, there are for example delicious local desserts, hot wine and – by contrast – ice-cold Czech beer. Markets are opened daily.

If you feel “stuffed” with Czech specials or are afraid to gain weight due to liters of great Czech beer, you can attend a significant Prague sport event. Every year the well acknowledged Prague Half Marathon amuses spectators with performances of first-class athletes, breaking records. Apart from taking part or just getting inspired by watching great sports performances with incomparable scenery in the heart of historic Prague (The route leads along the Vltava river and crosses five beautiful bridges), you can also enjoy an accompanying program – the Marathon Music Festival or After-Race Party.

7. Prague Weather and Temperatures in May 2019

May is usually a beautiful, warm month, with temperatures reaching 15 – 25°C (60 – 77°F) during the day. Flowers and trees are in full bloom. There are three days in the middle of May (12th of May to the 14th of May) referred to as the days of the “frozen saints” (Pankrác, Servác, and Bonifác), when the temperatures can get close to freezing in the morning; the last echo of the winter past. Dusk comes around 9 p. m. only. 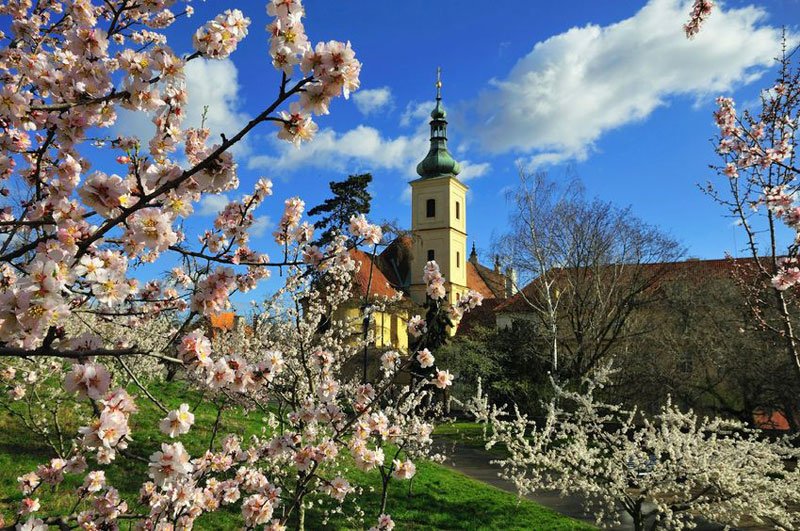 Blooming Cherries in Prague During May

Since Prague is especially beautiful in May, it is one of the best months to visit Palace Gardens under Prague Castle and for sightseeing of all the wonders of the Old Town by foot. It is also a great time to go to the Prague Botanical Garden to see and enjoy open-air exhibitions, the historical Vineyard of St. Claire, Japanese Garden, or the amazing tropical greenhouse “Fata Morgana”. There are also numerous educational and cultural events that take place here.

One of the most significant cultural events taking place in Prague during Spring is definitely The Prague Spring International Music Festival (Pražské jaro). The modern music festival has its roots in eighteenth-century England in connection with the rich English tradition, which is performing oratorios and cantatas. The Czech Philharmonic has been a very significant part of the Prague Spring from its very beginnings. In 1946 it celebrated the significant anniversary of its founding (50 years), and decided to highlight the occasion by organizing an international festival. The project was initiated by Rafael Kubelík, who was the Principal Conductor of the Czech Philharmonic at the time. The first Prague Spring Festival took place from the 11th of May to the 4th of June 1946, organized by the Czech Philharmonic alone. Edvard Beneš, who was the President of the Czechoslovak Republic at the time, took the role of Patron of the Festival.

The festival honors important musical anniversaries by including works of the composers concerned on its programmes. Also, the organizational team presents Czech and also world premieres of compositions by contemporary authors. The most renowned artists and orchestras are invited to perform here. Prague Spring’s traditional venue is the Rudolfinum concert hall, an esteemed Neo-renaissance building with an excellent auditorium, standing on the bank of the Vltava River. It is complemented by Prague’s Municipal House (Obecní dům), which has a bigger seating capacity. The festival takes place every year from the 12th May (anniversary of Bedřich Smetana’s death) until the 4th of July.

Besides the festival, the most important day is 1st of May, considered to be a “Czech Valentine” (První máj – svátek zamilovaných). The legend says every woman should be kissed below the blossom cherry tree so she won’t dry out during the upcoming year. If you happen to be in Prague on 1st of May together with your partner, you should go to Petrin Hill and enjoy the love in the air.