Springtime in the Czech Republic is always an unpredictable season for weather, with sunny days quickly transforming into ice cold rain showers. However, as spring goes on the weather tends to improve, and the parks of Prague begin to fill with people…

If you enjoy spending time outdoors, Prague is the place to be. Filled with green spaces, it’s possible to find grassy patches of land even in the city centre, and there are some huge parks and recreational spaces dotted about. Perhaps the best part is that they’re almost all completely free.

Here, we go through a few of the best parks that Prague has to offer. 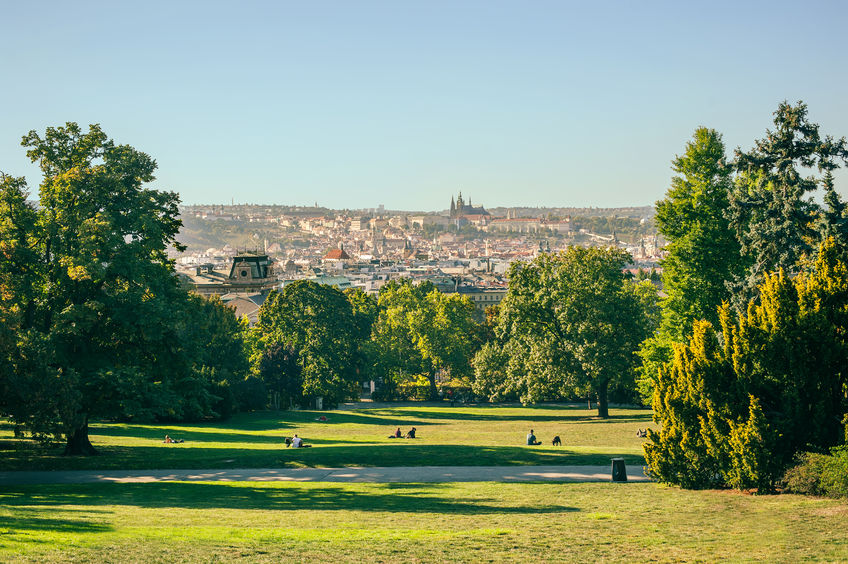 Situated between the districts of Žižkov and Vinohrady, Riegrovy Sady is a popular choice among expats and locals alike. It sits on a large hill, allowing for a spectacular view of the rooftops and spires of Prague.

On clear summer days, it’s common to find hundreds of people gathered on the grassy slopes to watch the sunset, in a uniquely romantic and peaceful atmosphere.

There’s also a large beer garden on site, serving a variety of drinks and snacks for reasonable prices and with plenty of seating available. What’s more, there’s also a giant screen, which is used to show sports games and movies on a regular basis.

If you aren’t in the mood for drinks, Riegrovy Sady is still a perfect place to take a stroll, have a game of frisby, or just relax with a few friends. The park is also popular with joggers and dog walkers. It’s pretty hilly, so expect to put in some physical effort if you want to reach the highest point. 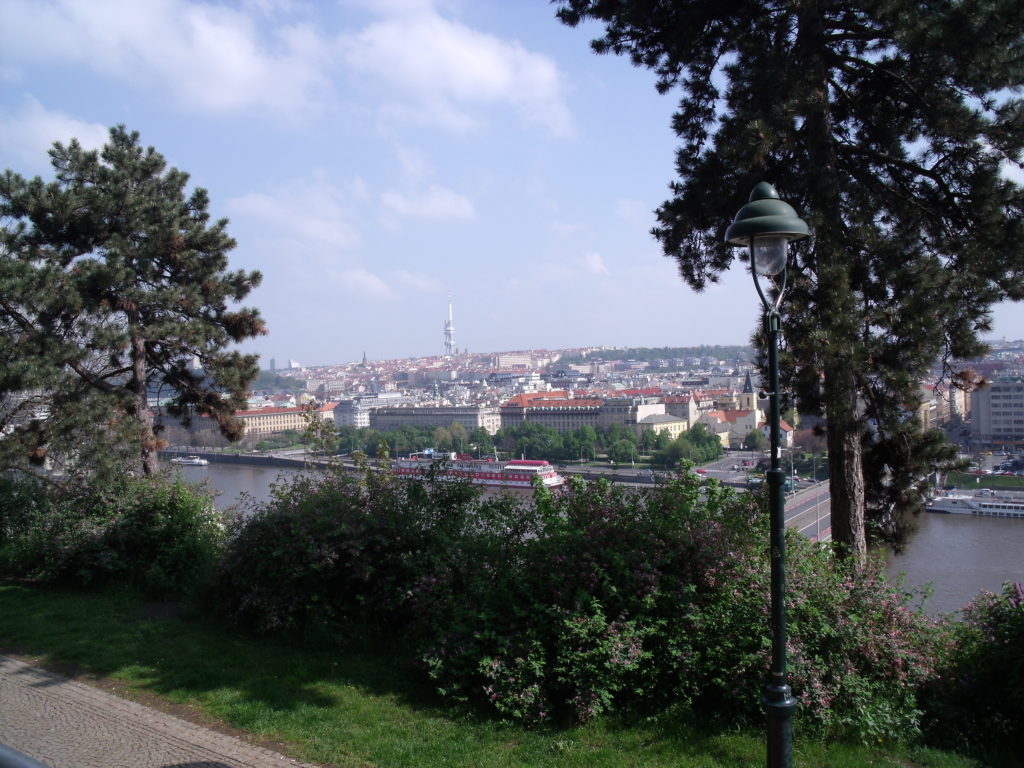 Just a small junk of the panoramic views from Letna Park

Letna, which translates as ‘summer garden’, is located on a cliff by the river, and provides breathtaking views of the Vltava and the Old Town. It’s also home to a huge beer garden, and in nice weather locals flock here to sit on the long benches and enjoy the panoramic views.

Outside of the beer garden, there’s a lot of park to explore, with winding pathways and large open spaces. Roller bladers frequent the leafy avenues, and there’s even a beach volleyball pit for some sandy fun in the hotter months.

For football fans, a five-a-side league takes place in the park, so strap on the shinpads and head over to Letna for a kickabout. The park lies only a few minutes’ walk from the Sparta Praha stadium, too, making it the perfect place to go for a few beers on match day before or after the game.

Petrin Hill during the Autumn

Towering over the city is Petrin Hill, complete with the famous tower that can be seen from almost everywhere (it’s now overshadowed by the colossal Zizkov radio tower). For a small fee, visitors can ascend the tower and enjoy unspoilt views of Prague, but an amazing vantage point is still available without paying anything at all. For those who dislike climbing hills, its possible to take a monorail to the summit, which provides a novel experience with significantly less stress on your joints.

There are several stalls and small bars on the hill, where you can pick up beer and a bite to eat. Going further down the slopes, there are fields full of trees which burst into white blossom in the springtime to create a romantic and magical scene.

One of the largest parks in the city, Petrin offers plenty of space and rarely becomes crowded. However, there is a shortage of seating areas compared to other parks, unless of course you count the large grassy slopes. 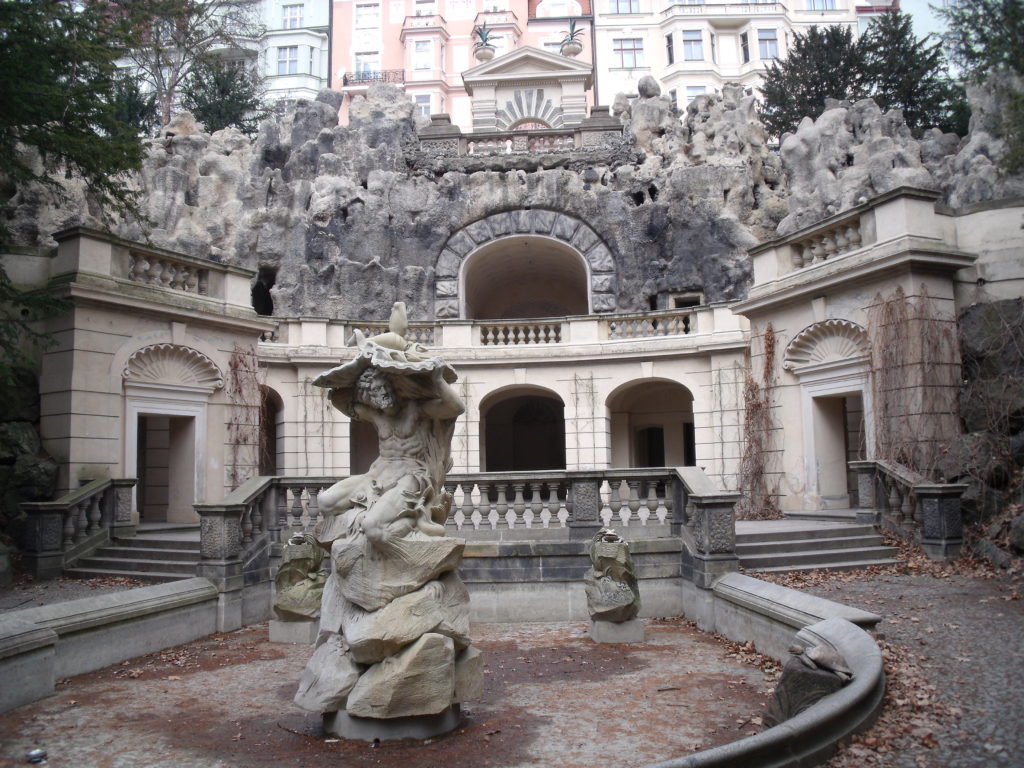 The Magical Grotto at Havlickovy Sady

Near the Krymska area, Havlíčkovy Sady is a large park with lots of open spaces and some extremely cool rock formations and structures. There are, of course, possibilities to buy beer and food on the site, but it’s also a great place to just hang out and enjoy the stunning natural scenery.

A highlight of the park is the large villa, known as Grébovka, which dates back to the 19th century and is surrounded by lush vineyards and terraces. There’s also an old grotto, which can be climbed and offers great views of the park and a rocky terrace to relax on.

An historical site, Vitkov is recognisable from almost anywhere in Prague – just look out for the enormous statue of a man on horseback which sits atop the hill. This statue is part of a monument which dates back to the 1920s and was originally used to represent the Czechoslovak legionaries. Later, it was adopted by the Communist forces, and today it serves as a reminder of the country’s history.

Exploring the monument and the exhibitions that take place there is a fascinating experience, but Vitkov has much more to offer. It’s popular with roller skaters and joggers, and is a great place for a walk (if you don’t mind steep hills). The monument at the peak also offers spectacular views of Prague.

Vitkov is located in the Žižkov district, not far from the metro stations Florenc and Křižíkova. It can also be accessed easily from the bus stop Tachovské náměstí using the buses 133, 207, or 175.

Of course, there are many more parks in Prague and the surrounding areas, and it would take a much longer post to do them all justice. However, the parks listed here are a great starting point, and at least one of them should definitely have a place on your list when spending a few days in Prague.