The Czech Republic contains more castles and chateaus per square kilometre than any other country in the world and that’s a fact. There’s of course Prague castle, but why not explore some of the country’s lesser known castles during your stay?  Listed below are some simply majestic castles, all of which are doable as a day trip from the city.

Karlstejn is a large Gothic style castle built by King Charles IV of Bohemia between 1348 and 1365. It is one of the most visited castles in the Czech Republic and is probably the most popular day tip from Prague for tourists visiting the city. This is partially because of how quick and easy it is to get here (a speedy and comfortable train will take you directly from Prague’s central station to the town of Karlstejn in around 40 minutes). Karlstejn is always to be found amongst the top contenders in any list of the Czech Republic’s most beautiful castles and it’s easy to see why, as Karlstejn is a castle straight out of the fairytales. 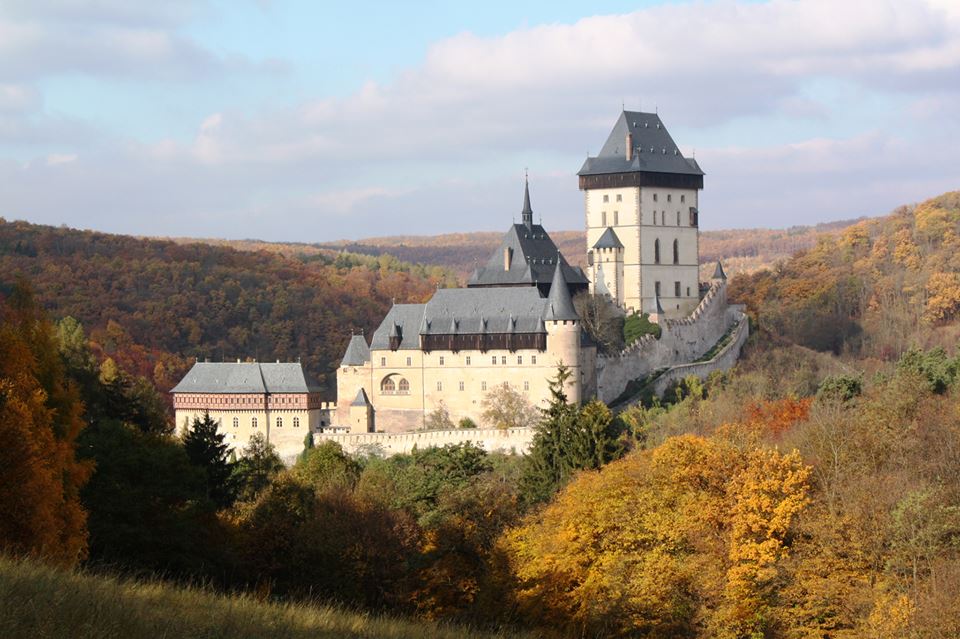 Although the town of Karlstejn is sadly a little overrun with stalls selling all the same tourist paraphernalia that you see in Prague, there are some nice pubs, restaurants and some beautiful countryside for hiking. The huge and pretty spectacular disused limestone quarry, Velka Amerika (Big America) is about an hour’s hike from Karlstejn and is well worth seeing.  In the summer, its possible to climb down into the quarry and swim in it’s awesomely clear waters. The beautiful village of Svaty Jan Pod Skalkou  (St. John under the Cliffs) is also just a 2 hour hike from Karlstejn. This gorgeous little village has a population of just 120 people but over the years it has attracted and inspired its fair share of distinguished writers, artists and poets. Today, its attractions include: St. John’s Benedictine Monastery, the Baroque church of St. John the Baptist and the famous cave (now a chapel), where according to legend the hermit Ivan prayed.  Just outside the cave there is a hot spring and the water here is said to have strong healing qualities. Svaty Jan pod Skalkou is also home to the awesome Obecna Skola Restaurant.

How to get here: This one is easy. There are direct trains leaving regularly from Prague’s main train station (Hlavni Nadrazi) to Karlstejn Station.

Hluboka Castle is simply exquisite. You’ll have to be up early to make it there and back in one day, but it’s got to be worth it for what is widely considered to be the most beautiful castle in the Czech Republic. It was initially built in the 13th century but has been knocked down and put back up again so many times that the castle as it currently stands, with its brilliant white walls and elaborate turrets and trellises, would be barely recognisable to those who originally inhabited it.

It is well worth taking a tour of the castle’s interior, which is exquisitely furnished and contains several rare treasures, including a series of 57 Flemish tapestries, one of central Europe’s largest armouries and a magnificent library containing an imposing Baroque fireplace and around 12,500 books.

How to get here: Take a train from Prague’s main station (Hlavni Nadrazi) to the station Ceske Budejovice. From here you can take a local connection to the station Hluboka Nad Vltavou. 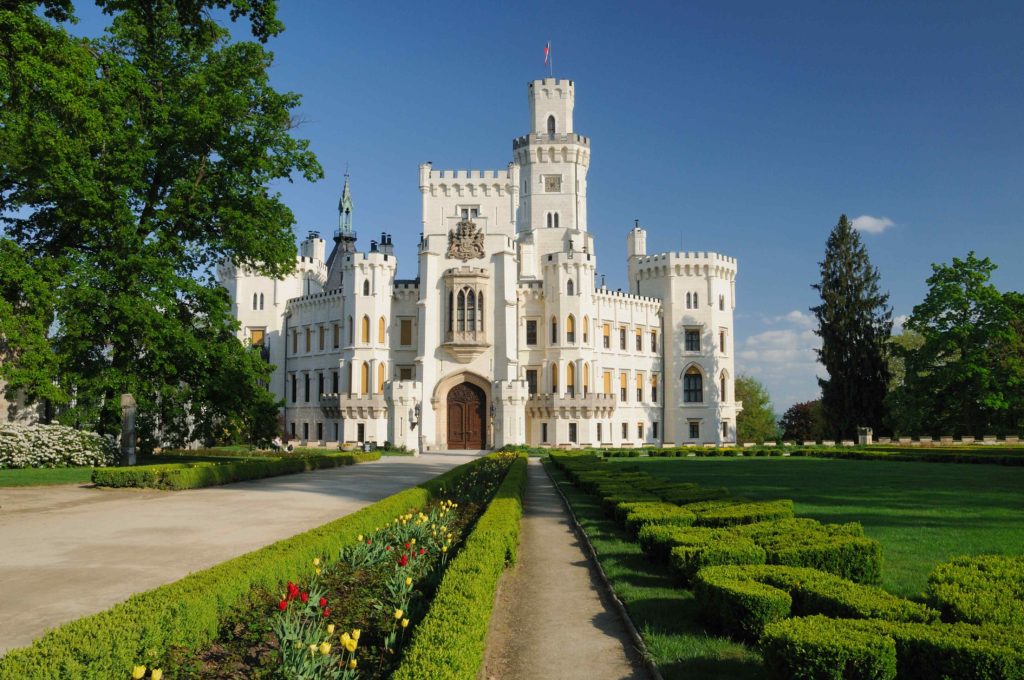 Entry fee to get into the castle: 50CZK (no tour necessary)

Considering that this truly beautiful UNESCO listed castle and park is such a short journey from Prague, Pruhonice is not widely known about or visited by tourists.  This Neo-Renaissance castle is surrounded by 240 hectares of landscaped park land, all based within a winding river valley. The park contains over 40km of well maintained trails, which will lead you through beautiful forests with some rather exotic trees and lush meadows containing many interesting species of flowers, plants and animals.

How to get here: Take the Prague Metro to Opatov station (C Line), then take bus 363 or 385 to stop “Pruhonice”. The bus ride should only take around 15 minutes. 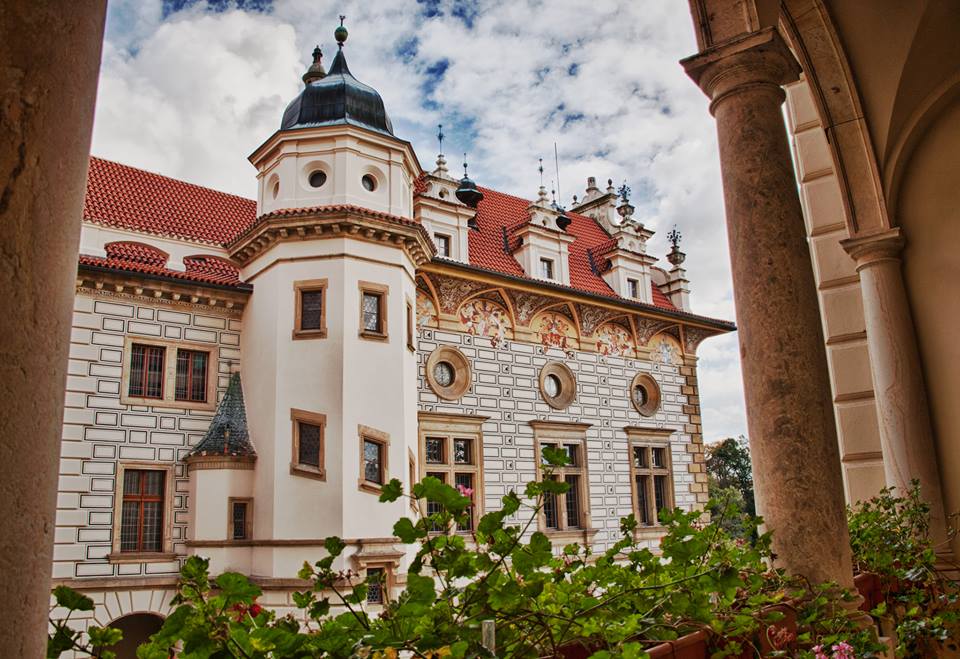 Originally the hunting lodge of Charles IV, Krivoklat Castle is the second most visited castle in the Czech Republic and was built during the 13th century.  As a result of continued changes and additions to the castle over the years, it has a unique if slightly mismatched look to it. If you take a tour around the castle’s interior it is possible to visit the dungeons (and have a look at some pretty gruesome instruments of torture), the famous Kings Hall, Knights Hall and the beautiful Gothic chapel. One of the castle’s biggest attractions is that it is surrounded by stunning countryside, which is perfect for hiking and cycling.

How to get here: Take a train from Prague’s main station (Hlavni Nadrazi) to Beroun. From here you can take a connection to the station Krivoklat. The castle is a 10 minute walk from here.

For me, you just cannot top the beauty and majesty of a good ruined castle and Okor is just that. The original stronghold was built in 1228 and it was tweaked, rebuilt and remodelled many times over the years. It also passed through many hands. Its last owners in the 17th century were Jesuits, but after the Jesuit order was discontinued in Bohemia, the castle was abandoned. Okor simply fell into a state of ruin as time went by, giving the place a sombre and slightly haunting atmosphere. This is a must for anybody who, like me, just can’t get enough of ruined castles.

How to get here: The bus to Okor leaves regularly from Dejvicka bus stop. 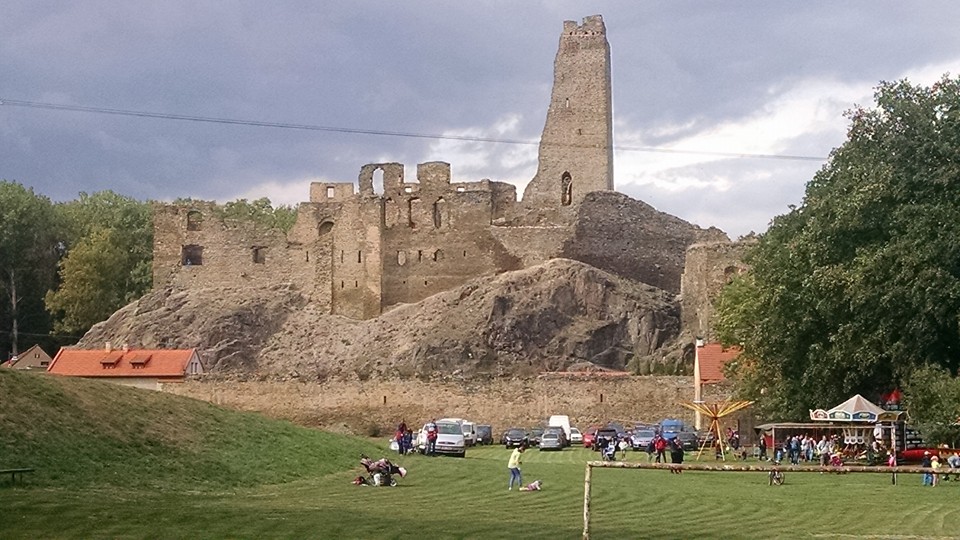 Travelling time from Prague by public transport: 2 hours 15 minutes (plus a 30 minute hike to the castle)

We’re going to continue on the theme of ruined castles and this next one is something quite special. Trosky Castle is built upon the summits of two basalt volcanic plugs and it looms above the beautiful Cesky Raj (Bohemian Paradise) nature reserve. It is possible to explore the castle alone without a guide (which is pretty unusual for Czech castles) and you can climb the two main towers for incredible views over an area of spectacular natural beauty.  The tower located on the lower peak is known as “Baba” (old woman) and the tower located on the higher peak is known as “Panna” (virgin). Whilst you’re here, it’s well worth taking the opportunity to explore the famous Cesky Raj nature reserve, which in 2003 was declared a UNESCO protected Geo Park and is home to some stunning rock formations and caves.

How to get here: Start by taking a train from Prague’s main station (Hlavni Nadrazi) to Turnov. From here you can take a local train to Ktova Station. Once you are at Ktova follow the maked “green trail” up to the castle. 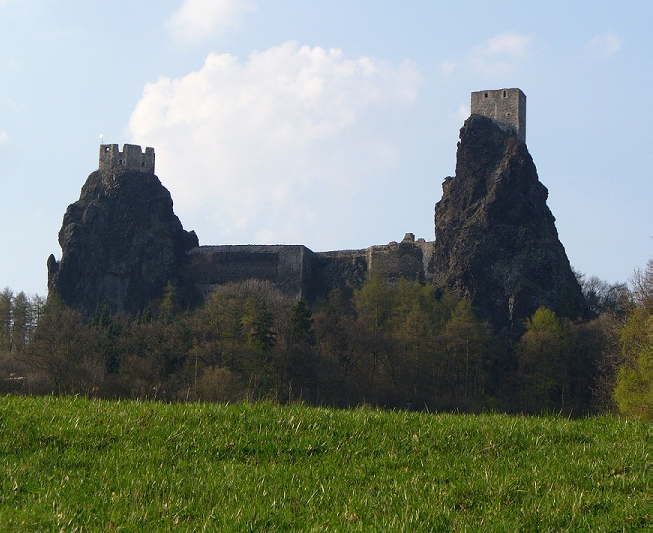 Tour Price: There are 3 different tours you can take around the castle, depending what you are most interested in seeing. The price for each tour is 300CZK and there is a 25CZK fee to enter the museum.

Konopiste is famous as the last residence of Archduke Franz Ferdinand, whose assassination was the cause of World War 1. The castle was purchased by the Archduke in 1887 and he transformed it into a highly luxurious residence. It’s possible to take a guided tour of the castle and see explore Ferdinand’s private residences, along with his extensive collection of hunting trophies, his shooting hall (complete with moving targets for practice) and the sizeable armoury. The castle is also home to a museum, where you can see the famous bullet which ended Archduke Ferdinand’s life. Although there is a charge to take the tour of the castle’s interior, the extensive castle grounds are open for free to visitors. The grounds are home to beautiful rose gardens and some quite striking Italian Renaissance Statues.

How to get here: by taking a train from Prague’s main station (Hlavni Nadrazi) to Benesov u Prahy. From here you can follow the marked “red trail” through the beautiful castle grounds.

Travelling time from Prague by public transport: 1 hour 10 minutes plus a 4km hike

This next castle takes us back to the beautiful Cesky Raj nature reserve. Kost Castle is hidden away in a valley and surrounded by dense forest and perhaps it is because of this that its gothic charms have remained relatively unscathed over the years. It is widely considered to be the best preserved castle the country. Surprisingly, the builders of the castle had defence in mind when they made the decision to build the castle in such an unconventionally low position. The thinking was apparently that a castle on a hill top was an obvious target. I suppose it’s hard to attack a castle if you don’t know where it is! Visitors to this castle can choose from two tours. The first is primarily concerned with the lives of the Kinsky family, who are the castles current owners. The second tour focuses on some more gruesome aspects of the castles history, including the medieval torture chamber and executions which took place here.

How to get here: You will need to take the bus from Cerny Most (B Line) to the charming town of Sobotka. From here, the castle is just a 4km hike along the marked “red trail”. 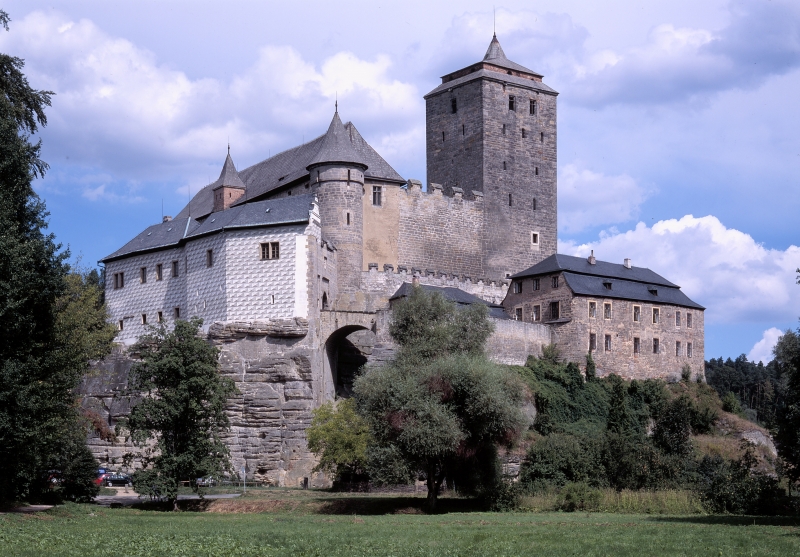