This week, my boyfriend and I took on a challenge that we had been talking about doing for years. We cycled from Prague to Dresden, following one of the most popular and well-used cycling trails in Europe. The main reason why this trip is so amazing is that almost anybody can do it. As it mostly follows 2 rivers (first the Vltava, then the Elbe) it is very flat. As an added bonus, it is almost entirely off road and all roads that you will find yourself on are quiet and non-threatening. Another great thing about this trip is just the sheer amount of fantastic stuff you will see. The trail cuts right through Czech/Saxon Switzerland, which is a protected area of outstanding natural beauty. It also passes by some of the Czech Republic’s most famous chateaus and castles, some charming villages, as well as smaller towns and cities with their own distinctive architecture and character. You will find more information about specific points of interest later in this article. 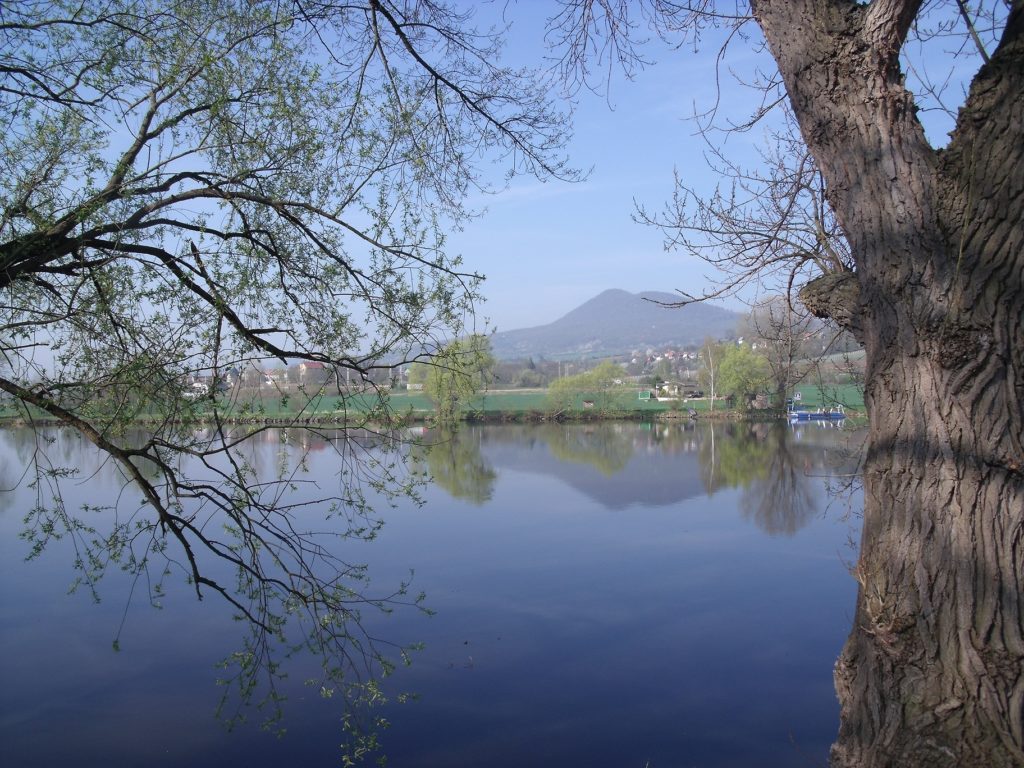 What about Dresden Itself?

Oddly enough, we didn’t think too much about Dresden while planning this trip. For us, it was initially all about the journey there. However, Dresden quite simply blew me away. Whilst walking through its streets, the old and the new just connected so seamlessly and elegantly. It’s a city full of colour, greenery and open spaces, making it ideal to just lose yourself in. Dresden is of course a city with a highly divisive and turbulent past and today it stands strong as one of the most significant cultural centres in Europe. Even if you have no interest in cycling to Dresden, I would thoroughly recommend jumping on a train and seeing what it has to offer. The journey is a little over 2 hours from Prague’s central station, so it’s even do-able as a day trip. 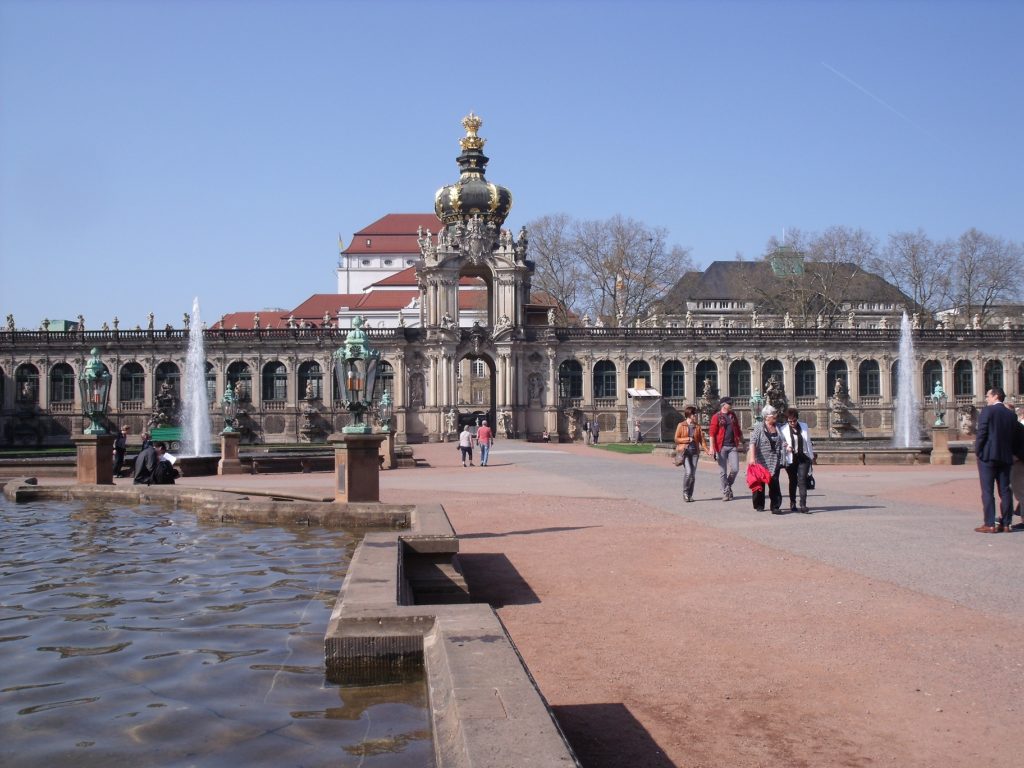 There are many companies who will do the work for you in terms of arranging this trip, including sorting out the accommodation for each night, activities at various locations and even transport of luggage in some cases. However, all of this comes at a high price. Planning the trip yourself you will not only save you A LOT of money but will also allow you to do the trip exactly how you want to do it, depending on your fitness level and what you’re interested in seeing along the way. 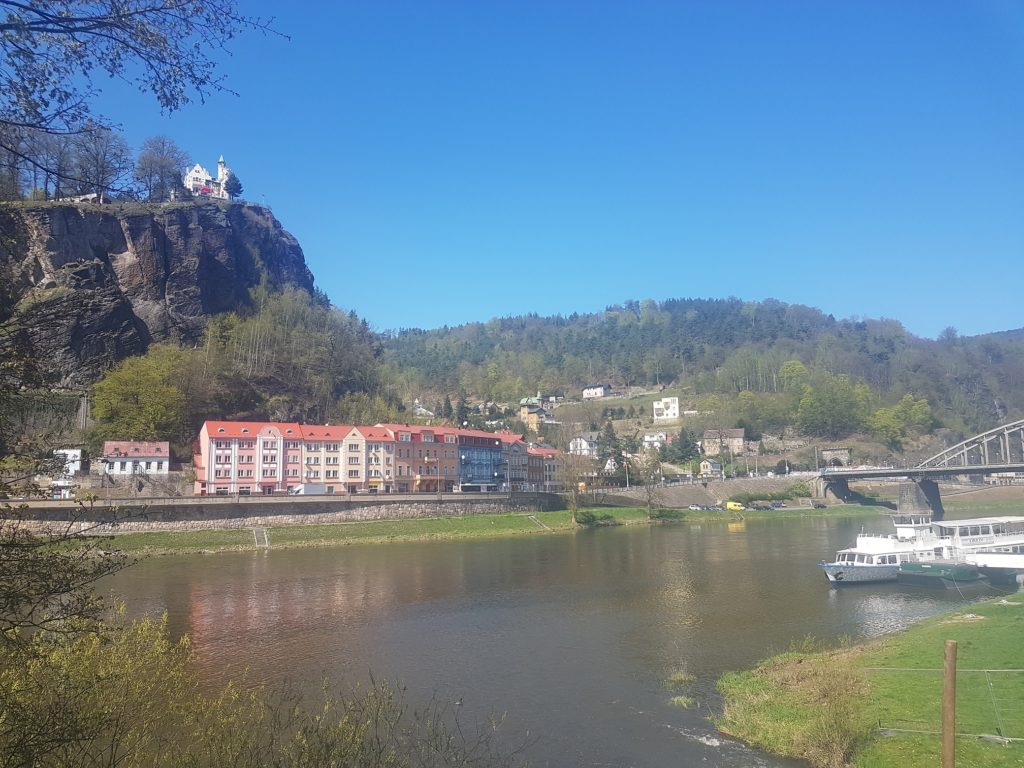 Another thing that really stands out about this trail is how well marked it is, particularly on the Czech side. Handy yellow signs will appear regularly to guide you and to reassure you that you’re still on the right trail. Initially you will be following bike path 7, which will eventually become bike path 2. Once you cross the German border, the trail will no longer be numbered but will still be well sign posted. You will follow signs first to Bad Schandou, then to Pirna, then to Heidenau, then to Dresden. 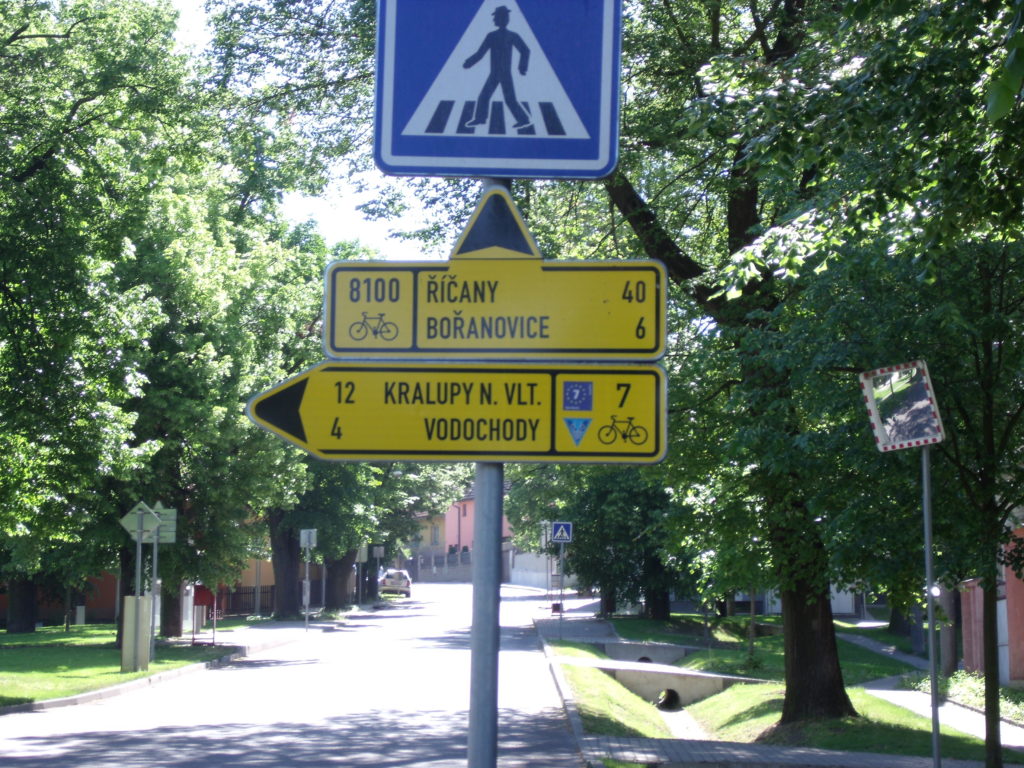 How Long will it Take?

This is totally up to you. It depends how much time you want to spend on your bike each day, which places you are interested in stopping in and how much time/energy you would like to have left to explore your surroundings after finishing cycling for the day.

We did the trip in 2 days, which is pretty much the bare minimum. It’s very do-able in this time, provided you’re relatively fit and are happy to see the sights from your bike seat (as we cycled over 100km each day, there wasn’t much time for sight-seeing). 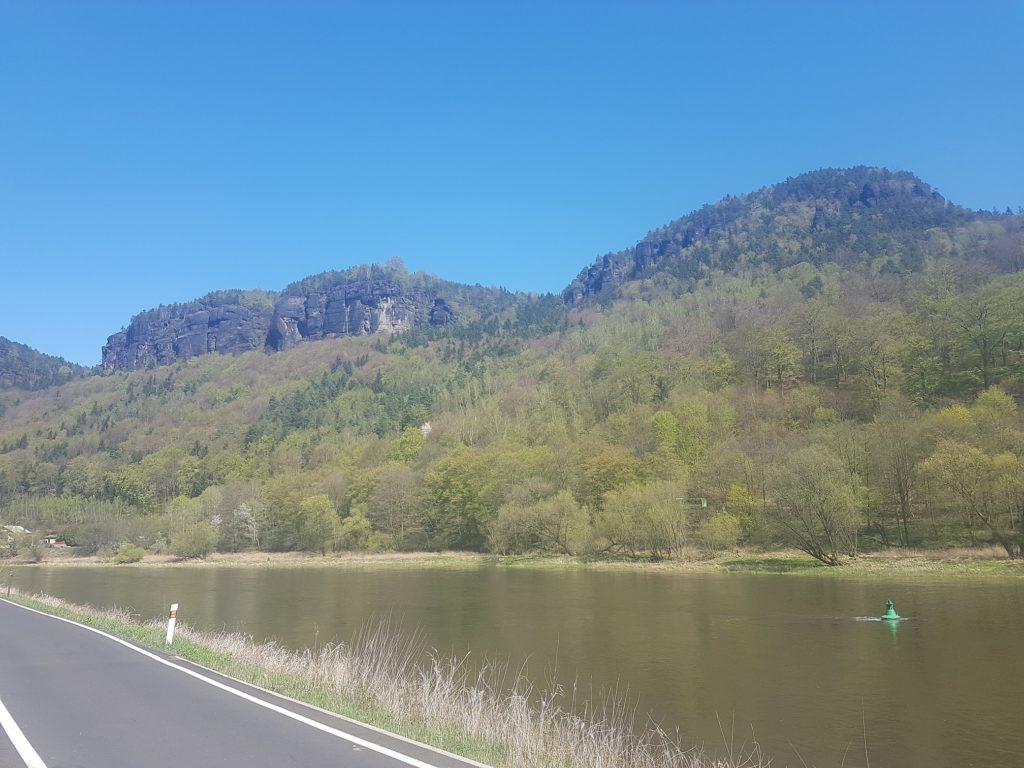 Here’s the breakdown of how we did the trip:

Hotel Roosevelt was a real find. It was great value, clean, comfortable and best of all, it had a designated room for bike storage. The staff were very friendly and spoke English.

Total time including breaks: 9 hours 6 minutes (this one includes a puncture!)

Accomodation: B + B Hotel Dresden

B + B hotel was smart, modern and very central. The staff were friendly, spoke English and the breakfast was great. The only downside was that there was no bike storage. We ended up storing our bikes in our room, but there were also stands on the street for locking them up. Judging by the amount of bikes we saw locked up around the city, I think that unlike in Prague, it’s relatively safe to leave your bike locked up on the street!

A big advantage of this hotel is that it is close to an amazing restaurant called Zum Schiesshaus. We grabbed a table in the large beer garden and spent a very happy evening drinking cold German beer, eating some delicious food and watching the sun slowly set.

Day 4: Travel back to Prague by train

What will you See?

As promised, here are a few points of interest to help you plan your trip.

Our trip starts from Nadrazi Holesovice Metro station. From here you need to head towards Trojsky Bridge. After crossing the bridge take an immediate right turn and you will find yourself on the pleasant riverside “number 7” bike path. 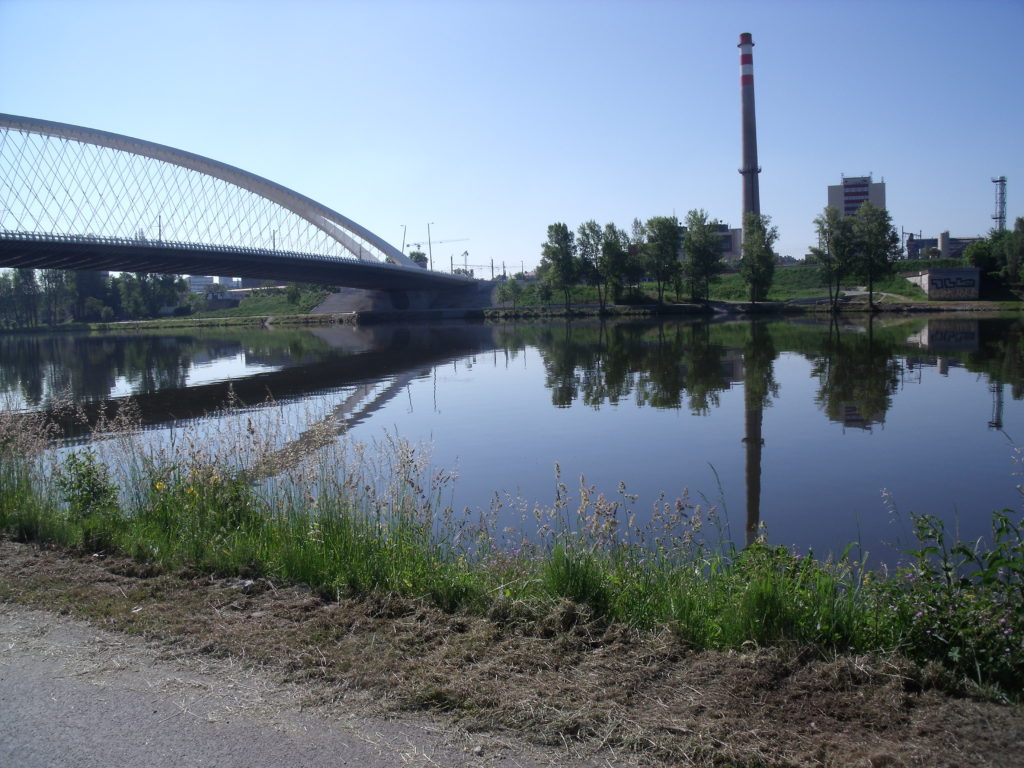 Klecany is the first town you will come to after leaving Prague. At Klecany the trail will briefly take you away from the river and you will be faced with a short but relatively steep uphill climb. Don’t be put off by this, it is actually the most significant climb of the whole trip. 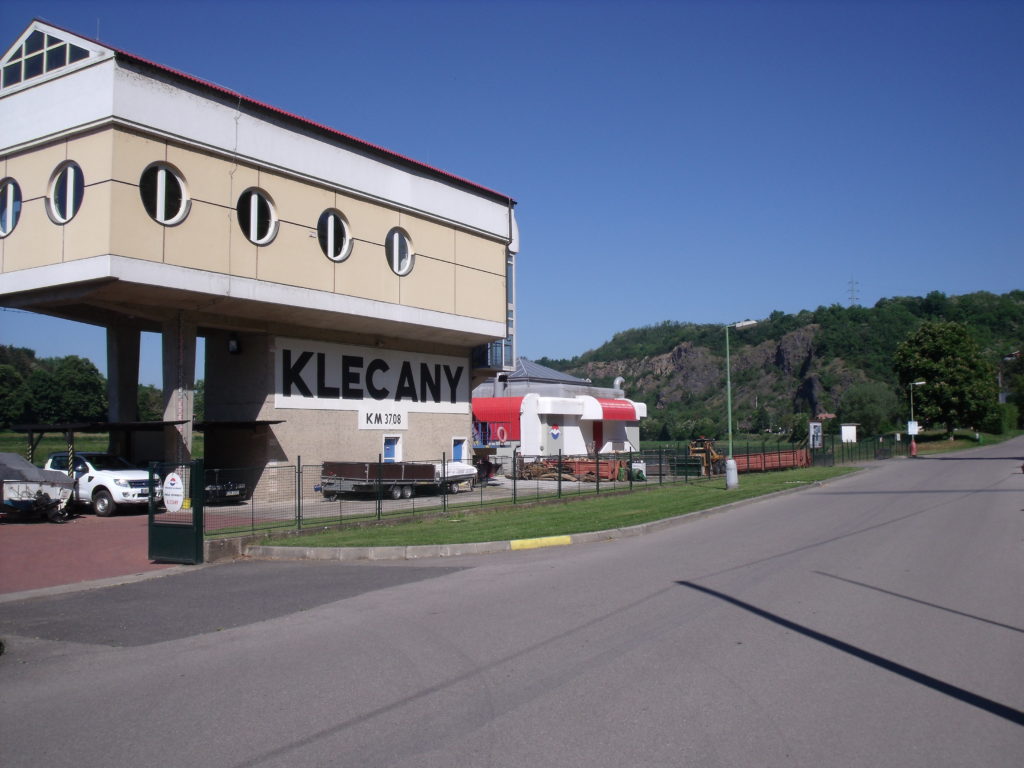 The town of Kralupy nad Vltavou 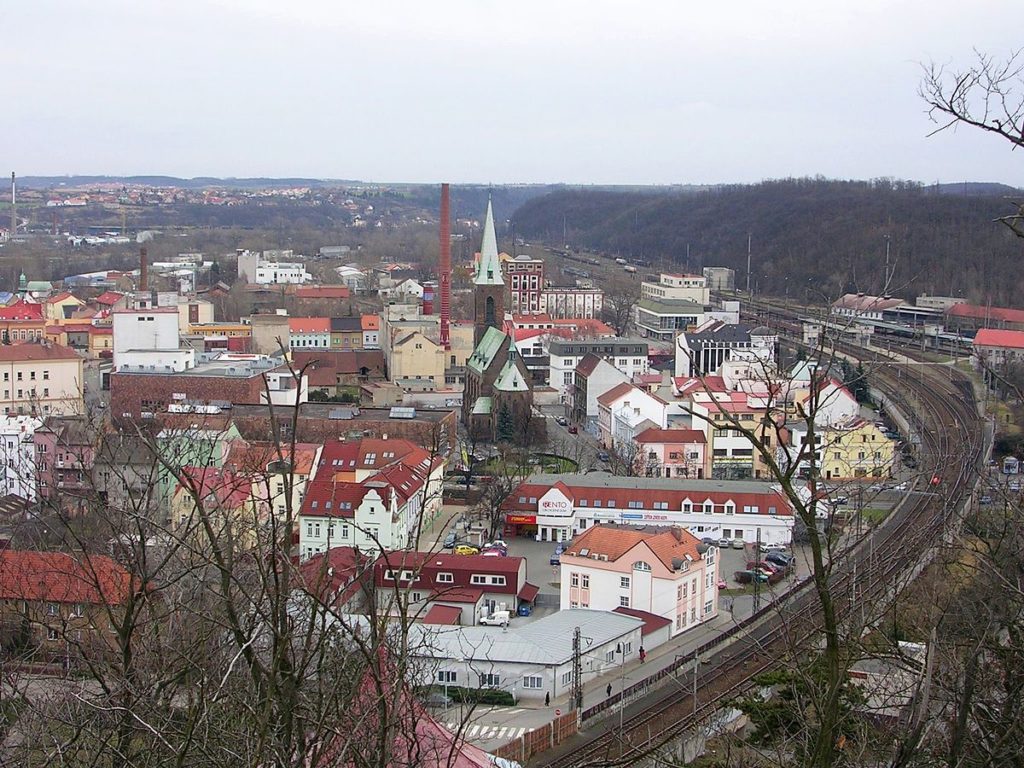 It’s worth a quick stop to have a look at this beautiful 16th century renaissance chateau. 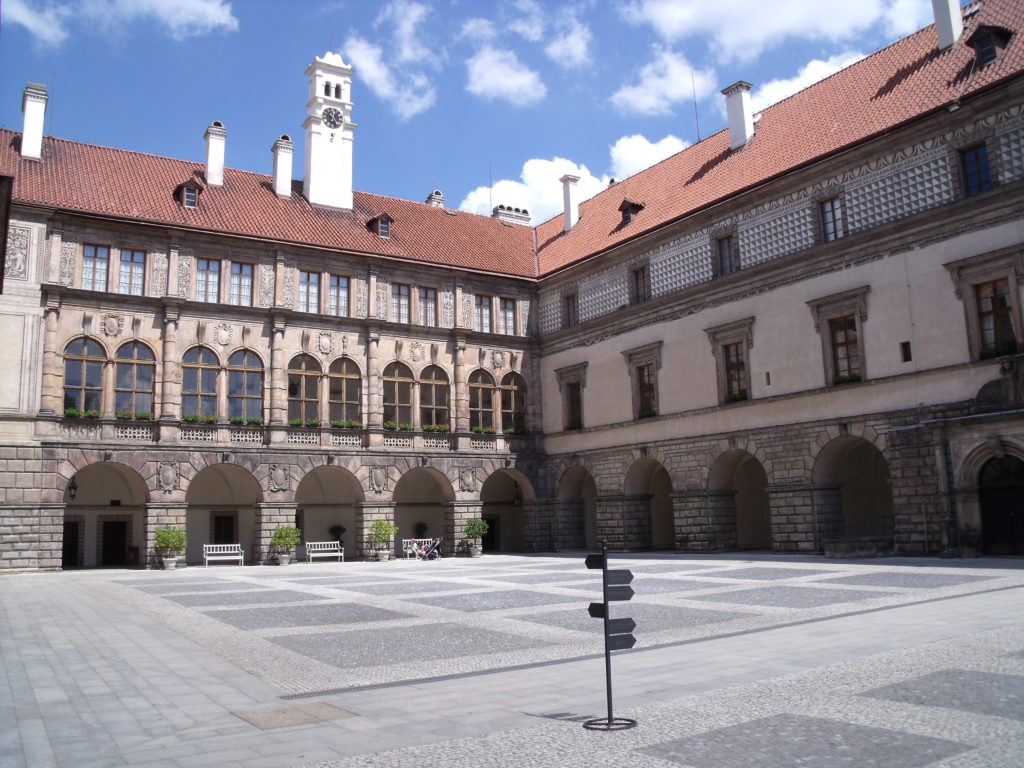 Veletrusy is one of the Czech Republic’s largest castle parks. It’s grounds consist of both landscaped gardens and also wild forest and meadows. While exploring this park, you will find many surprising statues and pavilions. This was a very pleasant and memorable stretch of the trail. 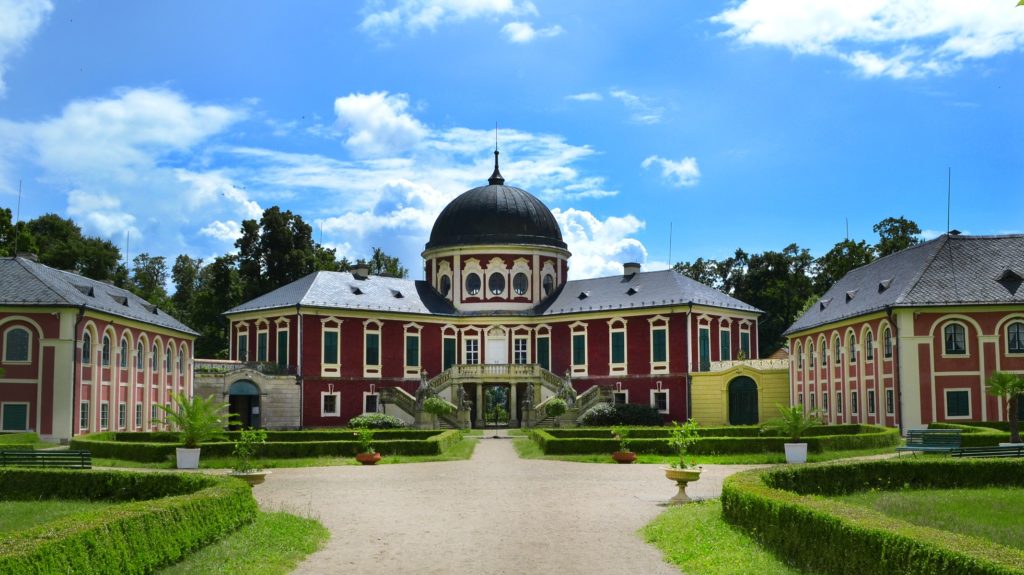 The town of Melnik

The picturesque town of Melnik is known for it’s castle, which overlooks the confluence of the Vltava and Labe rivers. It’s also known for its wine production.

Note: As you approach Melnik, the bike path will split and give you 2 options for crossing the river. One involves climbing stairs to get over a bridge and the other is a ferry across the river. We took the stairs. They were quite steep and awkward, but as we weren’t travelling with panniers or heavy luggage, we managed it. If you are travelling with panniers, it might be worth checking out the ferry. 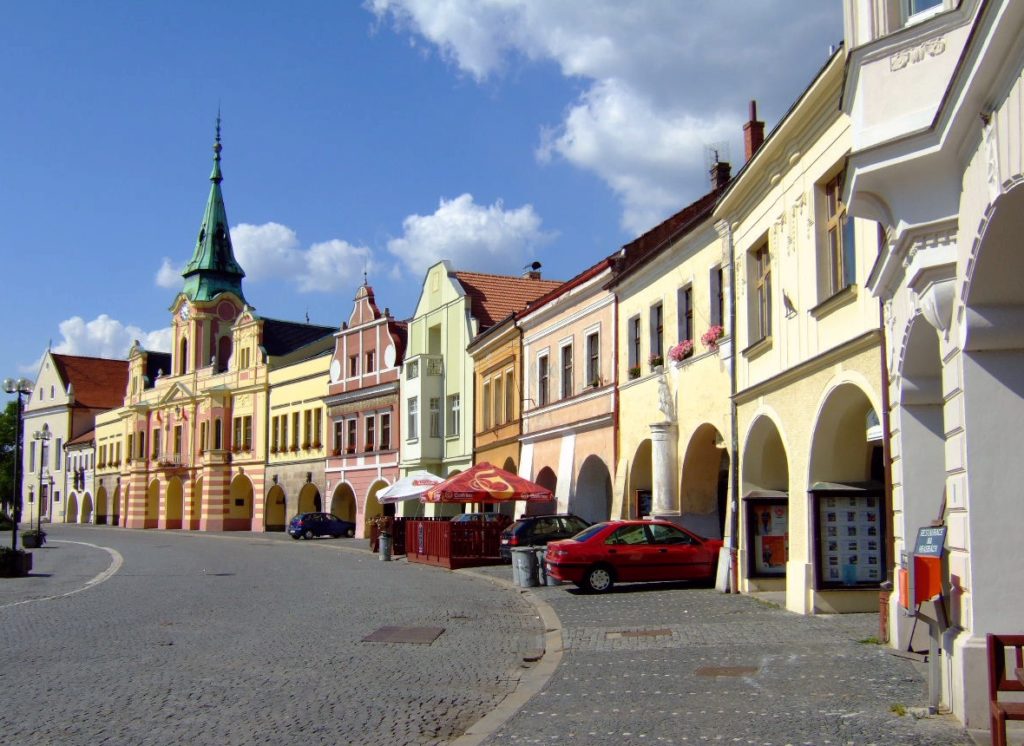 The Terezin fortress remains as a sad and poignant reminder of a dark time in Europe’s past. During World War II, over 150,000 people (including children) were imprisoned at Terezin. Tens of thousands eventually died here, while others were transported to meet their deaths in extermination camps such as Auschwitz. Today, the fortress remains much as it was and serves as a museum and memorial to those who were imprisoned here. 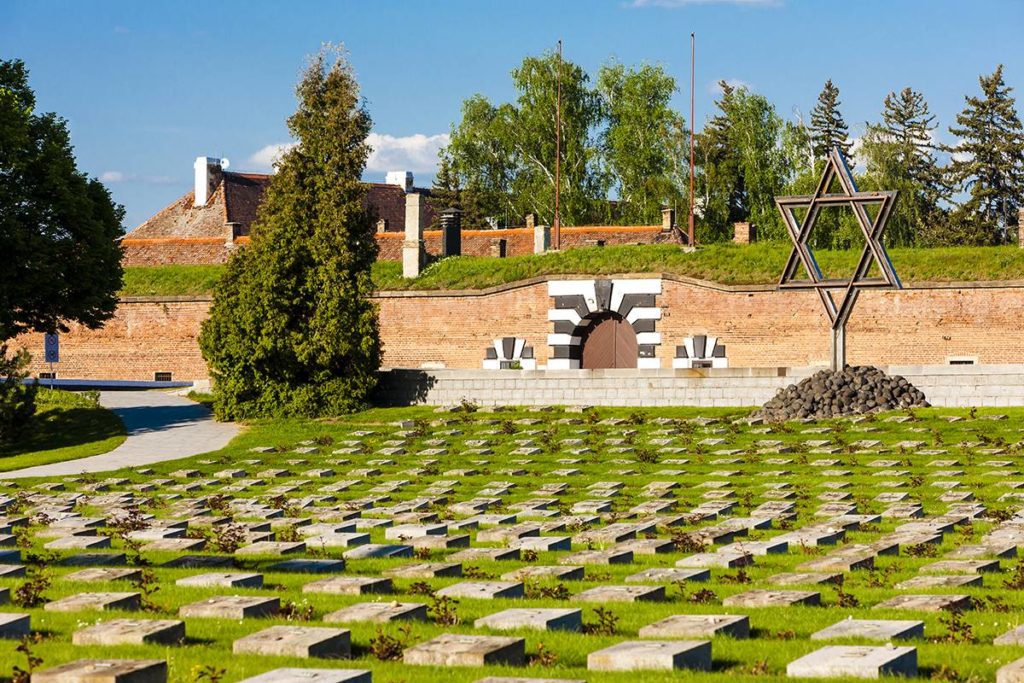 Litomerice is a small but beautiful town. The main square (Mirove Namesti) is particularly charming and a great place to sit out and watch the world go by. You can still see the original Gothic town wall as you enter Litomerice. 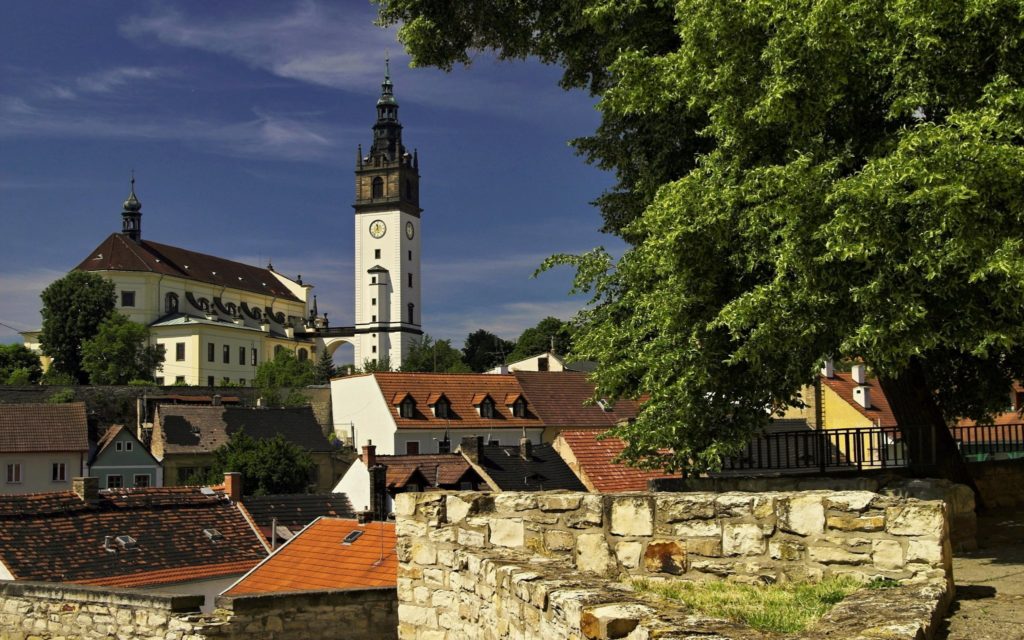 You will pass right by the imposing ruin of Strekov Castle as you approach Usti nad Labem. The castle dates back to the 14th century and has served as inspiration for many famous artists, including Goethe and Karel Hynek Macha. 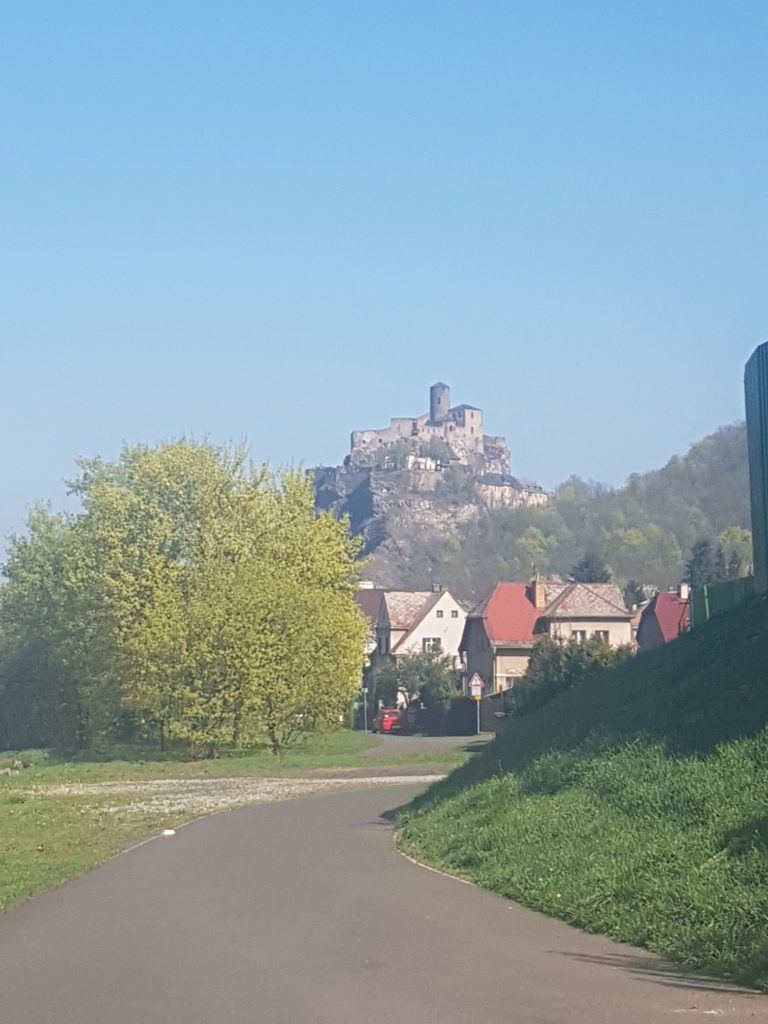 The city of Usti nad Labem

Usti nad Labem is the Czech Republic’s 7th largest city and is very much a centre of Czech industry. As you skirt the city, you will be able to take in the rather striking Mariansky Bridge.

The town of Decin

As you cycle through the town of Decin, you will spot Decin Castle perched up high on the hillside. 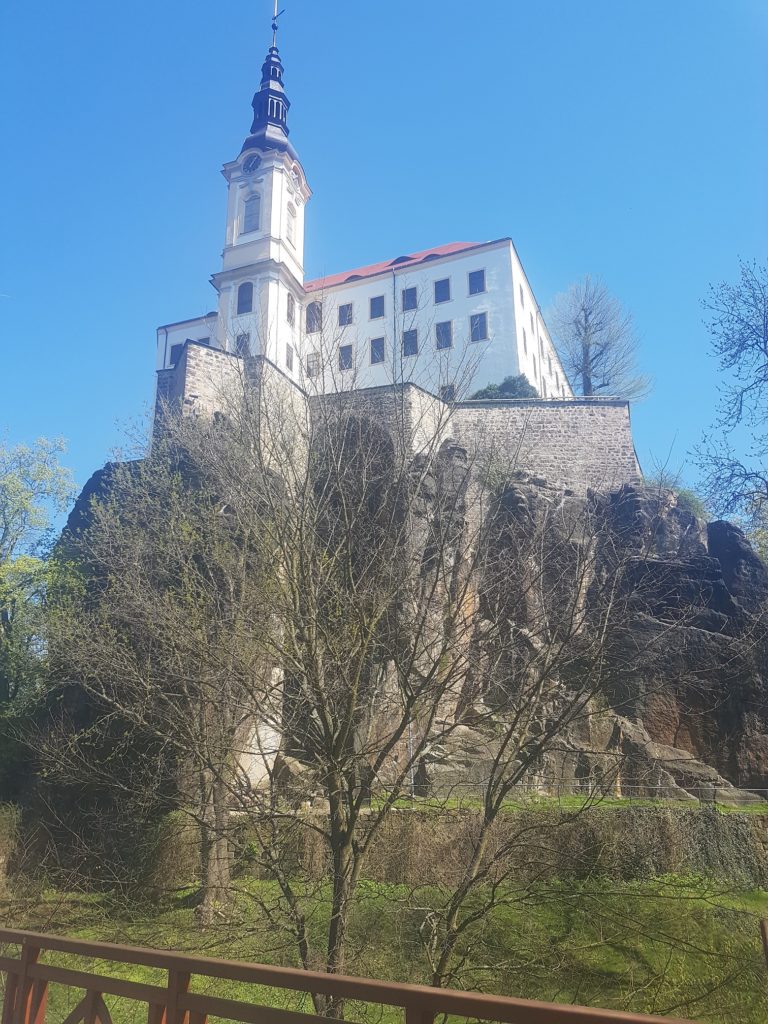 Czech Switzerland has been a protected area since 1972. It was truly humbling to cycle through such a stunning and dramatic natural landscape. The small town of Hrensko is just south of the German border and is very popular with visitors. Hrensko is where you will find the Pravcicka Brana, which is probably the area’s most stunning natural landmark and has very much come to be a symbol of this region. Unfortunately (or perhaps fortunately, since it is at the top of a rather large hill) the bike trail will not take you by the Pravcicka Brana, so this would have to be a detour. 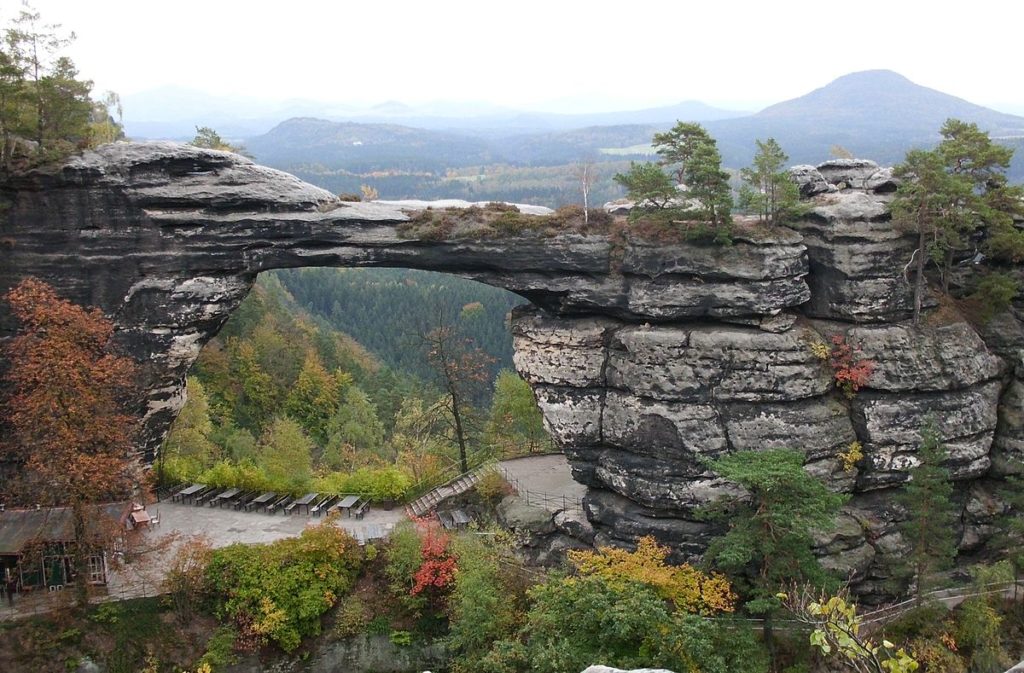 Bad Schandau is one of the best known holiday resorts in Saxon Switzerland (the German side of Czech Switzerland). It boasts a gorgeous medieval centre and even spa facilities!

If you find yourself with a little extra time, it’s well worth hopping across the river (you will find a ferry connection which will take you and your bikes) to see the Konigstein Fortress. This is one of the largest hilltop fortifications in Europe and was used as a prison until 1922. 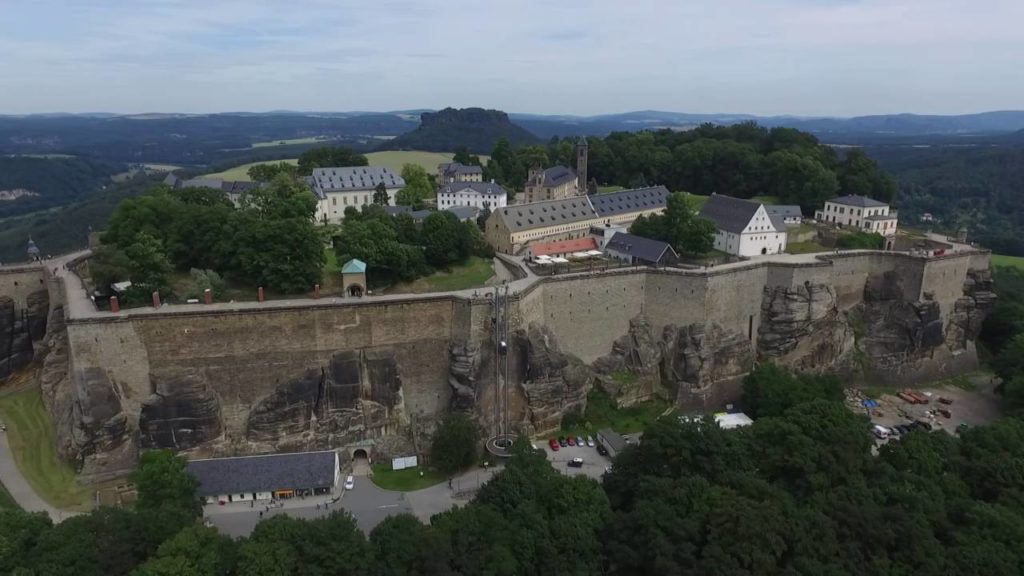 As soon as we entered the outskirts of Dresden, I knew it would be a city that I would love. The city is surrounded by lush green parkland, with plenty of playgrounds, beer gardens and people making their way in and out of the city by bike. 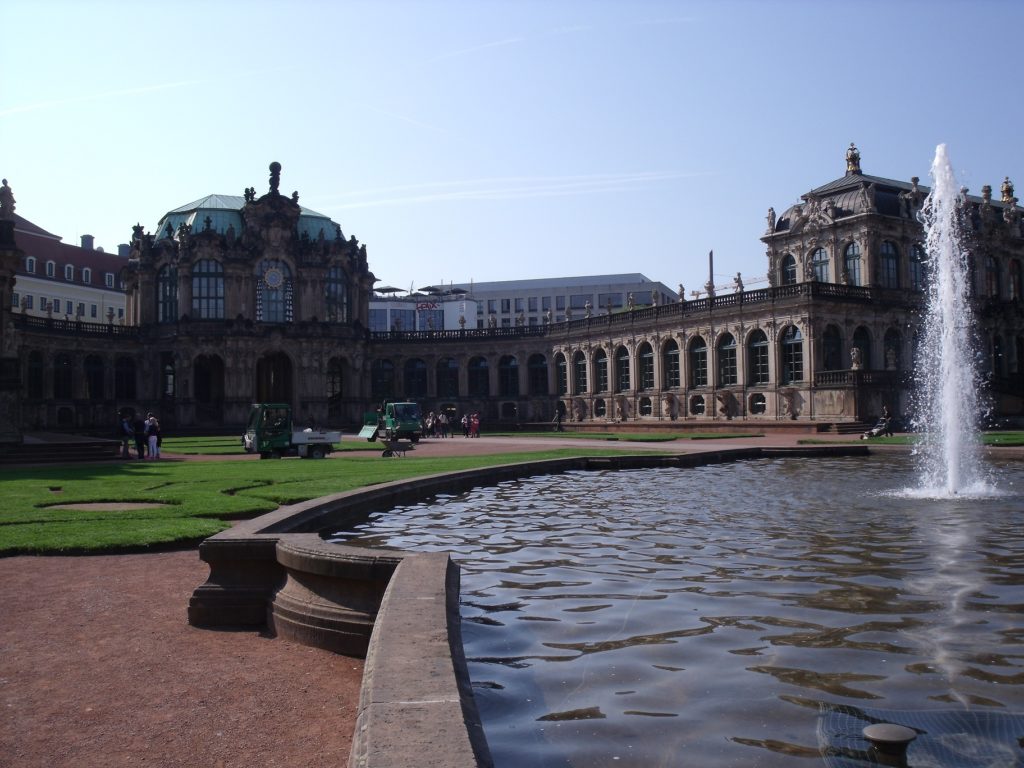 What to do in Dresden

This really depends how much time you have, but a stroll around the Altstadt (the old quarter) is a must. Since it was almost destroyed by bombing at the end of the second world war, the city has been lovingly rebuilt to retain all of its old world charm with a few modern twists. The beautiful domed Frauenkirche on Neumarkt is a particularly great example of this, as it was completely destroyed by bombs in 1945 and stood for many years as a crumbling memorial to the horrors of war. In 2005 it was reconstructed using original materials retrieved from the rubble. The grand and palatial Zwinger is a rather impressive selection of Barque buildings, clustered together in an elegant courtyard. These buildings also required large amounts of reconstruction after the war, but today this is a simply magnificent area of the city. For me, the City of Dresden Gallery and Museum was a real find. It charted the development of Dresden as a city from the 12th century to modern day and had some particularly interesting insight about life under communism after World War II. 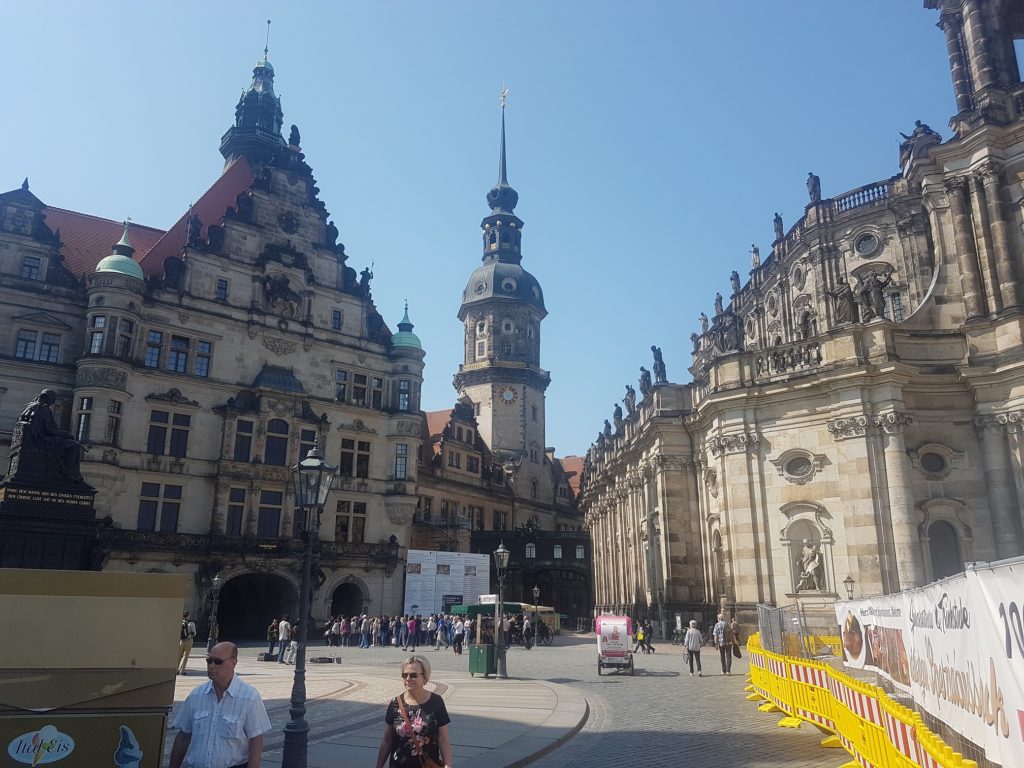 The Journey back to Prague

Although it would be perfectly possible to bike back to Prague, we opted for the train. There are direct, regular trains making the journey between Prague and Dresden every day, but it is advisable to book tickets and reserve seats in advance online. You should also remember that it is necessary to make a reservation for your bike.

We made our reservations directly through the Ceske Drahy website (available in English). The total cost of the journey for one person, including a seat reservation and space for one bike in the bike carriage was 702 CZK.