April 30th is a very special night in the Czech Republic, as the Czech people will be celebrating “Carodejnice”. This is one of my absolute favourite Czech traditions, as it is basically a long night of crackling bonfires, sizzling sausages cooked over the campfire, live music, dancing, beer drinking and fancy dress. Carodejnice means witches and the main event at any self respecting Carodejnice party is the burning of the witch. This is a tradition which finds its routes in Paganism. Tradition dictates that a straw effigy of a witch should be burned as a way of bidding a final farewell to winter and offering spring a warm and joyous welcome.

This is a celebration that Czechs really seem to get enthusiastic about, so parties and special events will be taking place all over the city. I still haven’t decided which event to attend this year, but if you’re interested in finding out more about Carodejnice, here are my 5 top contenders:

Carodejnice at Ladronka Park is one of the biggest Witch Burning celebrations in central Europe and is perfect for families with kids. Things will kick off at around 12pm and continue until 9pm. You will be able to listen to live music from the Yellow Sisters, and also Jaroslav Uhlir, who is one of the Czech Republic’s most famous songwriters. You will also be treated to a live drum show from the lively Tam Tam Orchestra. There will be art workshops, dance performances, a chance to play some sports and a costume competition for the kids. The event will finish off with a live fireshow.

To get to Ladronka Park, you need to take either tram 22 or 25 to the stop Vypich. It is around a 15 minute tram journey from Hradcanska Metro Station. Admission to this event is completely free. 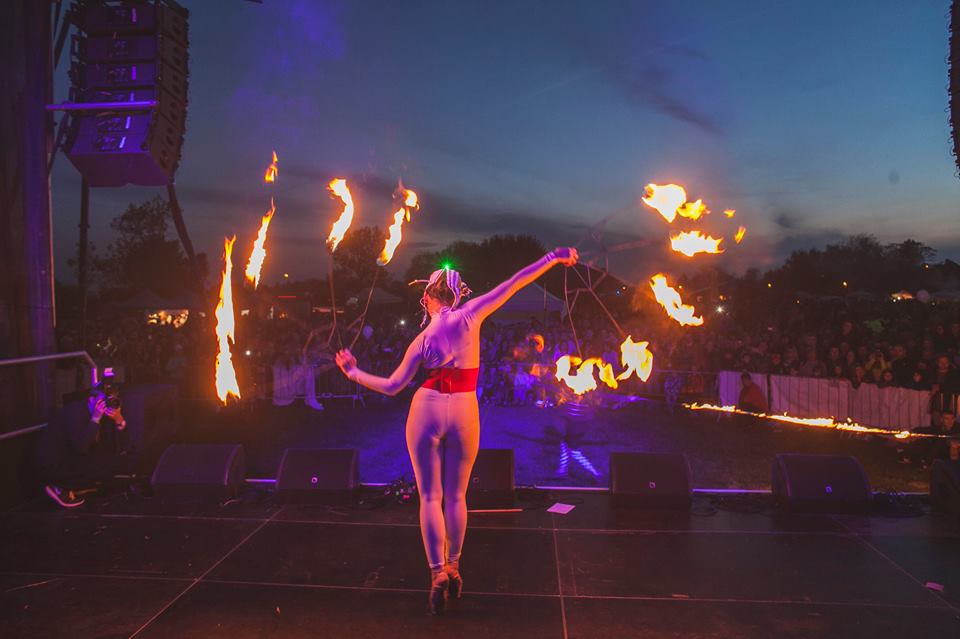 Malostranska’s take on Carodejnice involves a parade, which will begin on Malostranske Namesti at around 7.15pm on April 30th. Anyone taking part in the parade is encouraged to come along in costume but it isn’t compulsory. From here, the parade will proceed down Mostecka Street, over Charles Bridge and finish at Kampa Park, where the witch will be burned. The party at Kampa will continue until around midnight and will feature live music from the energetic ensemble Cilagi, in addition to the very medieval Krless and the lively Prazsky Poutovy Orchestra, who are sure to have everyone up and dancing.  Food and drink will be available for purchase and of course,  sausages will be roasting on the grill. Visitors can look forward to a live fire show to round off the night. This event is also free to enter.

With its golden sand and riverside views, Zlute Lazne is about as close as you’ll get to a beach in Prague. Every year, Zlute Lazne hosts its own Carodejnice party and this is where I have enjoyed the festival for the past couple of years, so it definitely comes recommended. This year, the live music will be courtesy of Deda Mladek and his Illegal band and the after party will be hosted by DJ FANCY. There will be events going on from 12pm at Zlute Lazne, with the earlier programme being more child friendly. The burning of the witch is scheduled to take place at 6pm and the evening be concluded with a live fire show at 9pm. Admission to this event is free but you should remember that it is forbidden to bring your own food or alcohol into Zlute Lazne. 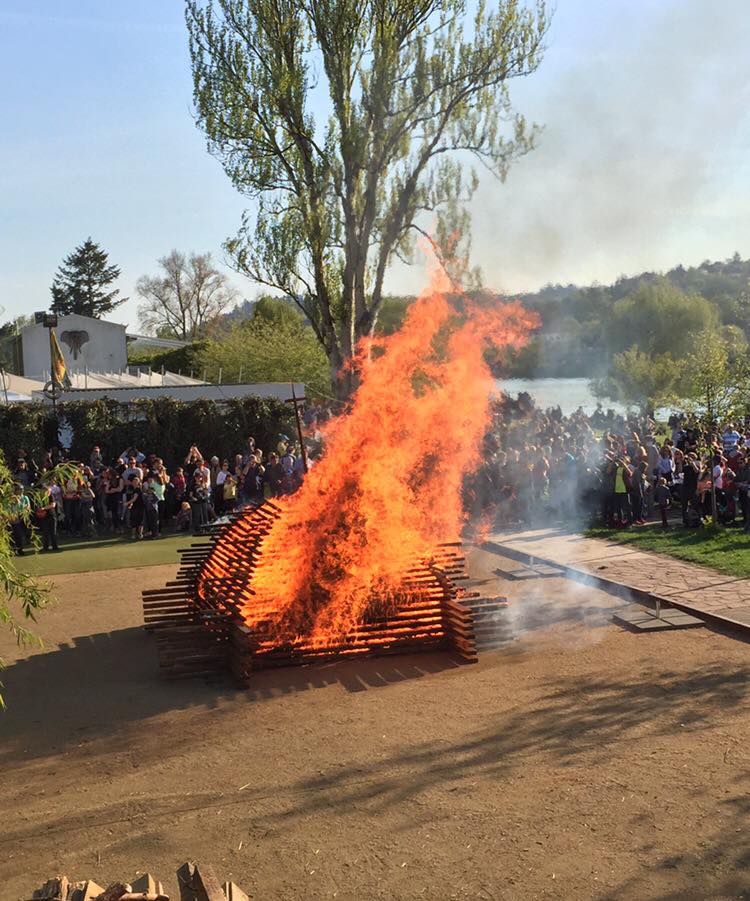 The witch goes up in flames at Zlute Lazne

This event looks like it is going to be really special, as it is to be found in the grounds of the beautiful and historic Brevnov Monastery. Several stands will be set up, selling produce from local farmers, including cheese, wine, meats, handmade toys and spices. There’s also going to be no shortage of fireside snacks (you can even buy raw meat to roast on the bonfire) and 6 varieties of beer to choose from, including Pilsner Urquell and some beers which are actually brewed at the monastery iteself. For the kids, there will be face painting and an inflatable slide. The markets and food stalls will be open from midday, the fire will be lit from 3pm and the witch is schedueled to meet her firey end at 5pm. Festivities are set to continue until 10pm and a band called Vitamin will be providing music. Unfortunately I couldn’t find any information about the mysterious Vitamin, but the event looks promising all the same.

To get to the monastery, take tram 25 or 22 to the stop Brevnovsky Klaster. 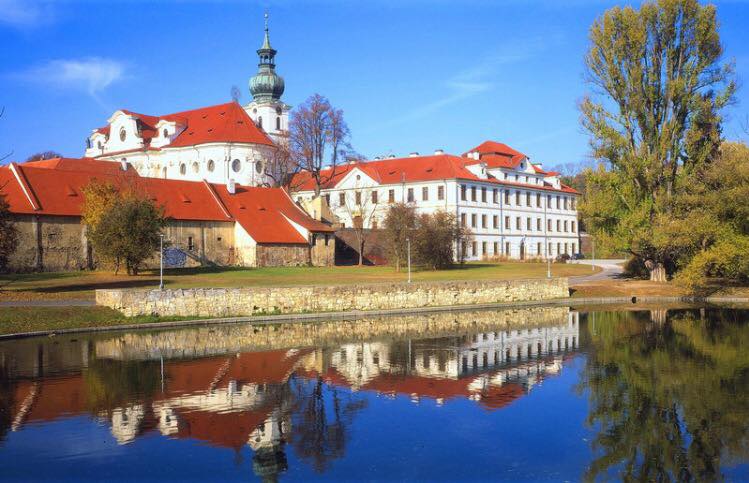 Brevnov Monastery on an ordinary day

Out of all of the Carodejnice events I have found out about, this one is probably the one with the most exciting music line up. There’s going to be Ska, Grime, Punk Rock, Rap, Hip Hop and several live DJs taking to the decks for the after party, which should wind up at about 2am. There will be various stalls providing food and beverages, a bonfire from 6pm and a full and varied programme for the kids, including a bubble workshop, a woodcraft work shop and a bouncy castle. Admission to this event is on a voluntary basis but all proceeds will go towards a social rehabilitatin programme for people living with mental illness.

Cafe na Pul Cesty can be found in the Centralni Park Pankrac. This is a short walk from Pankrac Metro Station (C Line) 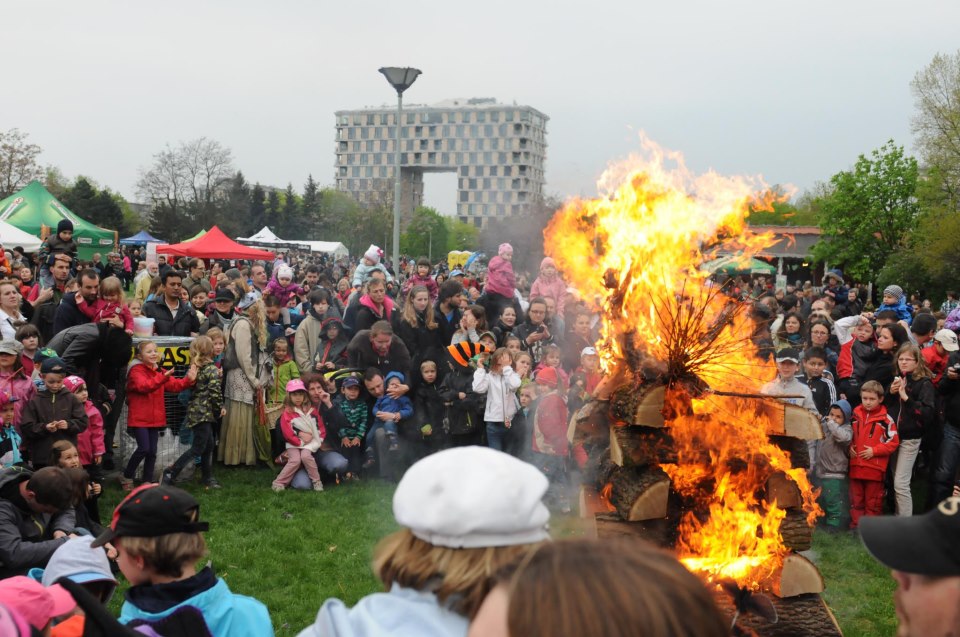 Fun and flames and Pankrac