On the 30th April 2018, just a few days from now, Czech Republic is celebrating Čarodejnice. But what exactly are we celebrating? And where to go to have a portion of the fun?

While you might not have heard about Čarodejnice, you surely have heard the term ‘Walpurgis Night’ once or twice in your life before. The latter is the eve of Christian feast day of Saint Walpurga, an abbess from the 8th century who was hailed by the Christians of Germany for battling pest, rabies, whooping cough and of course: Witchcraft.

Back in time, farmers would usually pray and protect themselves from evil spirits on this day – only after the Spanish inquisition would they shield themselves explicitly from witchcraft. Besides praying, one could protect his farm and land by cracking ones whip in the middle of the night. All the ones that did not want to wake up their neighbors could simply place brooms on the ground and plant so called ‘trees of May’ (often pines or birches) to ward off any spells or curses.

While all Christians and fellow farmers were praying, it was said that on the very same night the witches from all over would traditionally fly to the “Brocken” (and other high peaks) to have a meeting. The folks’ rites that were practiced had come a long way but only with Goethe publishing his ‘Faust’ in 1808, Walpurgis Night achieved popularity and has been celebrated since.

Celebration in the 21st Century:

Every European country has its own approach towards celebrating Walpurgis Night; Czech Republic has its very own interpretation of the holiday, too.

On the last day of April, huge bonfires – some of them up to 8 metres tall – are built and burned in the evening, traditionally on top of a hill.

Back in time, fires were supposed to ward off witches and their powers – even more so by burning brooms, which were considered to bring bad luck to whoever owned it. The ashes of the burned brooms though were said to possess magical powers to increase the crop for the coming year. Not only did the ashes promise a farmer rich harvest but also all the brave folks that dared to jump over them were granted fertility for the upcoming months.

Today, Čarodejnice is mainly celebrated to kiss winter goodbye and welcome spring into our midst. Young and old gather around and cheer, whenever sudden black and dense smoke emerges from the fire; a sign that a witch has just ‘flown away’. To start the procedure, a puppet of a witch made from straw is being fastened to a pole surrounded by wood and lit on fire.

As the clock slowly turns towards midnight, young women usually set out to search for a cherry blossom tree. Why? Legend has it that if a young girl is not being kissed by her true love at midnight of Čarodejnice – or the following day – she is doomed to live a lonely and miserable life.

The day after Čarodejnice is thus called “the day of those in love” or “the day of the lovers” – well, at least for the young women that find their true love and are kissed by them under a cherry blossom tree… For the ones who will either not find a suitable tree or their true love in time, don’t worry, the next Čarodejnice is just another year away! 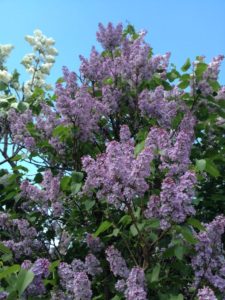 Welcome spring traditionally by joining the festivities of Čarodejnice!

Čarodejnice is considered one of the biggest outdoor events of the year. While there might be a little magic in any street you go on that fateful day, Ladronka Park, Pankrac and Žluté lázně are three of the most popular spots around Prague to go to.

On this special day, Ladronka is probably the biggest festival in Prague. Up on the ‘peak’, tons of food and beer stands, bands, at least one magician and – of course – a fire is welcoming families, young adults and the older generation to celebrate and enjoy the day.

Celebration starts at 14.00 and lasts till the very last witch has flown away. The fire (respectively a five meter tall straw witch) is being lit at 19.00, so make sure to come in time in order to not miss out on the traditional rite of Czech Republic!

The entrance is totally free and activities for young and old as well as your pets are being looked after!

Especially great for families with kids is Žluté lázněs program on Walpurgis Night. Tons of workshops, competitions and guaranteed fun are going on at the banks of Podoli. Not only will your kids enjoy making necklaces and hear stories, Žluté lázně also holds a surprise or two for their parents.

The entrance is traditionally free and you can look forward to a relaxed and fun afternoon at Žluté lázně.

Another wonderful place to go and celebrate Čarodejnice is the park ‘Na Pankraci’. Not only did they plan workshops and a kid’s theatre, they also thought of bands that will put all visitors under their spell.

Of course the traditional witch burning is not falling short and once the fire is lit, you get to broil your own sausages! For all the vegetarians there are food stands on the premises that will gladly feed you.

The entrance is tip based and the money collected will go to the non-profit organization ‘Green Doors’ which supports people with mental illnesses in their efforts to overcome the crisis caused by their illness and get back as soon as possible into ordinary life. Having fun and doing something good – what a combo!